Dominant defense once again leads the way for 49ers 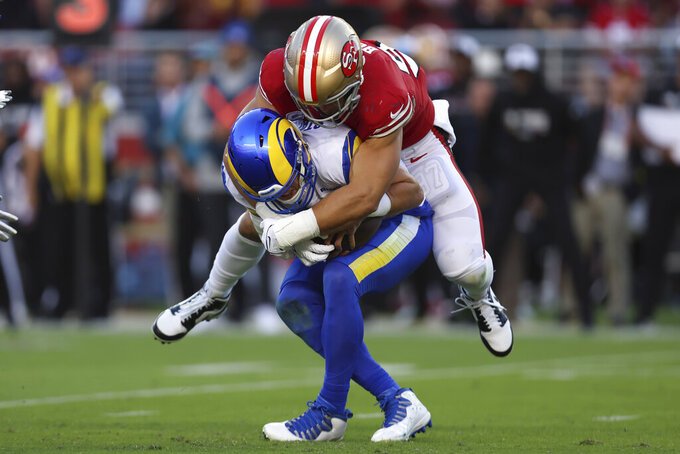 “I think it’s to be best in the league," he said. “It’s kind of our mindset every year and this year we have the personnel to do it. Not that we haven’t in the past, but at all three levels are elite players.”

That was on display Monday night when the Niners shut down the Super Bowl champion Los Angeles Rams, keeping them out of the end zone and putting Matthew Stafford on his back repeatedly in a 24-9 victory.

The Niners (2-2) had seven sacks, an interception return for a touchdown, a fumble recovery and three forced three-and-outs against the Rams. Bosa and the front line dominated a banged-up offensive line for Los Angeles and the back end limited any big plays from Cooper Kupp.

“It wasn’t just any one area that we dominated in, but all areas had their opportunities," coach Kyle Shanahan said Tuesday.

It's been that way most of this season for the Niners, who except for a couple of breakdowns in a rainy opener at Chicago have given up next to nothing.

Over the past three games, the Niners defense has scored as many touchdowns as it has allowed (one). The 37 points allowed by the defense are tied for the second fewest through four games since 2010, trailing only the 14 by the 2019 Patriots.

San Francisco has allowed only 3.81 yards per play, the lowest mark in the NFL through four games since 2008 when the Steelers allowed 3.78 and the Ravens allowed 3.56.

That's making life easy on an offense that hasn't been great yet as quarterback Jimmy Garoppolo shakes off the rust after missing the entire offseason and training camp.

“There was honestly a point, I think it was 14-9 and it’s not that we relaxed on offense, but you feel confident in the guys on defense,” Garoppolo said. “I don’t watch much of it, but the couple plays that I do see, it’s hell for the quarterback and it’s just, that’s tough. So I love having them on my side.”

Pass rush. Bosa led the way in a dominant performance, generating 14 pressures on his own, according to PFF. He had two sacks to give him an NFL-leading six on the season and he became the first player in franchise history to have at least one sack in each of the first four games of the season.

He had help with Samson Ebukam getting two sacks of his own, and Charles Omenihu, Hassan Ridgeway and Deommodore Lenoir adding one apiece.

Downfield passing. Garoppolo didn't push the ball downfield at all, missing on both deep shots he tried and completing only 2 of 6 passes thrown at least 10 yards downfield.

Talanoa Hufanga. The second-year safety delivered the play of the game with his 52-yard interception return for a touchdown that sealed the victory. Hufanga has shown a knack for making big plays all season and is quickly establishing himself as a star in his first season as a starter in the NFL.

K Robbie Gould missed a 42-yard field goal in the fourth quarter with the Niners looking to make it a two-score game. Gould has missed two FGs so far this season, with one getting blocked in Week 2 to set up a touchdown for Seattle.

Colton McKivitz, filling in for injured All-Pro LT Trent Williams, left the game with a sprained MCL and is expected to miss about two months. ... DT Arik Armstead, who missed last week’s game with a foot injury, left this game with the same injury and was undergoing tests Tuesday. ... WR Jauan Jennings (ankle) is day to day. ... S Jimmie Ward (hamstring) and CB Jason Verrett (knee) are expected back at practice Wednesday.

101. Deebo Samuel topped the 100 mark in yards after catch in a game for the fourth time in his career thanks to the 52 yards he ran after the catch on his electric 57-yard TD. Since Samuel entered the NFL in 2019, no other wide receiver has more than two games with at least 100 yards after the catch.

The 49ers begin a two-week road trip on Sunday at Carolina. They will head to West Virginia for the week following that game and finish the trip at Atlanta on Oct. 16.