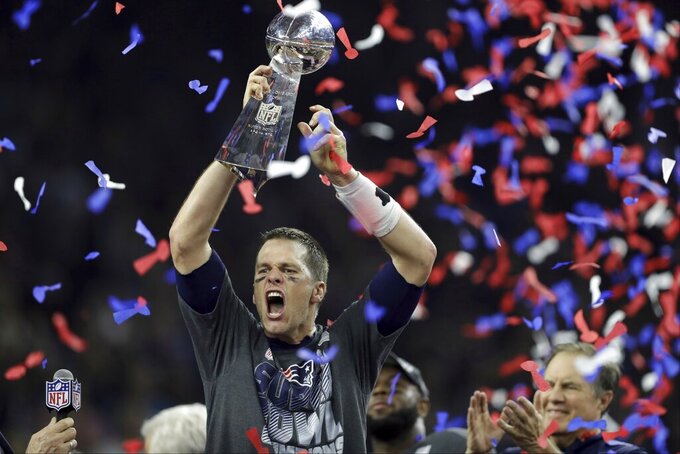 FILE - In this Feb. 5, 2017, file photo, New England Patriots' Tom Brady raises the Vince Lombardi Trophy after defeating the Atlanta Falcons in overtime at the NFL Super Bowl 51 football game in Houston. Brady’s journey to each of his nine Super Bowls with the New England Patriots will be the subject of an ESPN series released in 2021. Entitled “The Man in the Arena: Tom Brady,” the nine-episode series will include a look from Brady’s perspective at the six NFL titles and three Super Bowl defeats he was a part of. (AP Photo/Darron Cummings, File)

ATLANTA (AP) — Whenever some sense of normalcy returns to the NFL, Isaiah Oliver knows there will be a new role waiting for him as a leader in the Atlanta Falcons’ secondary.

A second-round draft pick out of Colorado in 2018, Oliver is suddenly one of the most experienced cornerbacks on the roster after the team cut longtime stalwart Desmond Trufant in a salary cap move.

Oliver looked like a bust until a turnaround over the second half of last season, when he finally started playing with a level of confidence the Falcons expected.

He’s still got work to do, especially when it comes to pressing receivers at the line of scrimmage. But the team is counting on him to become a lock-down cornerback and positive influence on the younger players around him, especially first-rounder A.J. Terrell from Clemson.

“With Tru leaving, I definitely have to step into more of a leadership role,” the 23-year-old Oliver said this week during a video call with Atlanta media. “There’s a lot of young guys in the room, but I’m capable and ready to do that. I understand the defense really well. I understand what the coaches want. It’s just a matter of going out there and doing it every week.”

While Oliver graded out as one of the worst cornerbacks in the league a year ago, his improvement over the second half of the schedule was a big part of the turnaround after coach Dan Quinn turned over the defensive coordinator’s role to Raheem Morris. Bouncing back from a 1-7 start, the Falcons won six of the final eight games to save Quinn’s job and provide a bit of hope heading into the 2020 season.

Morris simplified the scheme and encouraged each player to focus on his individual strengths.

“Whether it was playing a certain technique or playing a certain receiver a certain way, he wanted us to be comfortable with what we were doing and really work on that one thing,” Oliver said. “He didn’t want everyone trying to do the same things. We’re all different types of players.”

Starting all 16 games and playing nearly 90 percent of the defensive snaps, Oliver had 62 tackles and broke up 11 passes. But he failed to make an interception, which will surely be a point of emphasis for new secondary coach Joe Whitt Jr., and surrendered far too many completions.

Oliver looks forward to working with Whitt, who is particularly known for his work in Green Bay with defensive backs such as Charles Woodson and Sam Shields.

“He knows the game really well,” Oliver said. “He’s coached a lot of great DBs, including some guys who were not supposed to be good DBs but ended up being good DBs.”

Whitt will have his work cut out for him in Atlanta, where the top four cornerbacks all have two years or less of experience; especially playing in the NFC South, which means a pair of games against two of the greatest quarterbacks ever, Tampa Bay’s Tom Brady and Drew Brees of New Orleans.

“I’m looking forward to the challenge. We’ve talked about it a little bit as a group,” Oliver said. “This is an opportunity to show just how good we really are.”

Oliver and Terrell figure to be the starting cornerbacks, backed up by a pair of 2019 draft picks, Kendall Sheffield and Jordan Miller.

While the coronavirus pandemic has forced teams to conduct virtual offseason programs, Oliver has worked out a few times at local parks with some of the other Atlanta-based receivers and defensive backs. They’ve done some individual work, as well as one-on-one and seven-on-seven drills — presumably while complying with social distancing and other safety guidelines.

“We’ve been able to do some things we would’ve done if we were at the facility,” Oliver said. “The competitive juices come out. We’re all there to compete. We expect to win every rep we do. We’re definitely still staying safe and staying healthy. We’re not going to hurt each other. But it’s been some good work.”

Oliver expects big things from the secondary, even if some view it as one of the team’s most glaring question marks.

“It is a young group, but a really smart group,” he said. “The guys are already at a level of understanding the defense really well even if they’ve only been in the system for one year. Obviously, losing a guy like Tru ... changes some things. But I definitely like the group we have.”