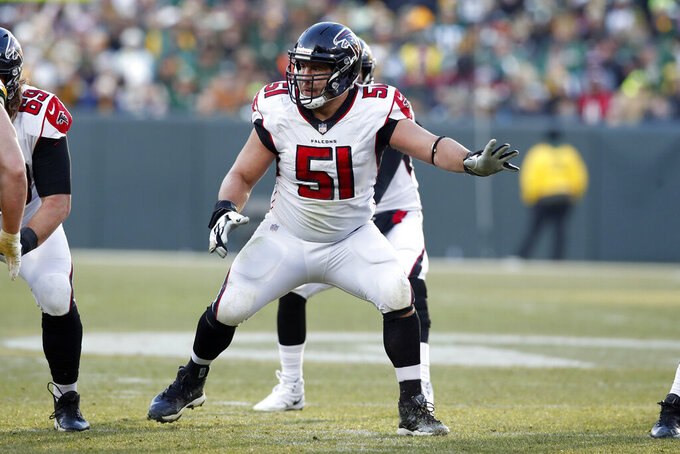 FLOWERY BRANCH, Ga. (AP) — The Atlanta Falcons' offensive line might be able to start the same five players for the second straight week.

Atlanta (1-1) heads to Indianapolis (1-1) this weekend coming off a four-point win over Philadelphia that included more personnel shuffling on the line.

The Falcons had already lost rookie right guard Chris Lindstrom, the 14th overall draft pick, to a broken foot the week before when rookie right tackle Kaleb McGary, the 31st overall pick, went down with a knee injury in the second quarter. McGary returned in the fourth to replace Ty Sambrailo, but the line was making other adjustments with Jamon Brown filling in for Lindstrom.

The line adjusted on the fly to help produce the winning drive, but quarterback Matt Ryan threw three interceptions, and the run game took a step back with an average of 3.4 yards on 17 carries. Starter Devonta Freeman has run 19 times for just 41 yards in two games.

"We had some really good plays and we had some plays where there was meat still on the bone," Mack said. "Guys here and there not doing exactly what we wanted them to. A 4-yard run, which is good, but it could've been an 8- to 10-yard run. Those are things you hope to grow and build from and getting better and better as the year goes on."

McGary's status against the Colts is uncertain. He did not practice Wednesday and was limited Thursday. Sambrailo will start if McGary, who missed much of the preseason with a heart procedure, is held out.

Mack, in his 11th year, knows that fluid communication is critical on the line. He has two new guards, nine-year veteran James Carpenter on the left side and Brown, a fifth-year veteran, figures to start on the right side until Lindstrom returns in the second part of the season.

Mack is accustomed to left tackle Jake Matthews, his teammate for the past four years, but McGary is still a work in progress. As they walked into the locker room from the practice field Thursday, Mack was still giving instructions.

McGary is still feeling his way through the pro game, and Mack wanted him to know it's OK to speak up.

"What you see a lot of times with young guys is they're afraid of screwing up so they won't talk as much," Mack said. "You should let that go, make the calls and if you're wrong, we'll help you. If you're saying anything that's just outrageous, it's better to tell us you're going to do something dumb and we'll stop you and we'll get you on the same page.

Matthews made the O-line's play of the game against Philadelphia , flattening cornerback Avonte Maddox late in the fourth quarter to help spring Julio Jones free for a 54-yard touchdown catch on fourth-and-3. Ryan said after the game that he had never faced such relentless blitzing in 12 seasons, but Matthews, a sixth-year veteran, loved how his teammate read the pressure and checked down to the decisive screen on the left side.

"We knew they were going to bring a lot of zero pressure, just everyone," Matthews said. "Obviously sometimes they're bringing more than you can block so you have to work for ways to get the ball out or whatever it may be. The last play of the game we took advantage of that with that screen when they brought an all-out."