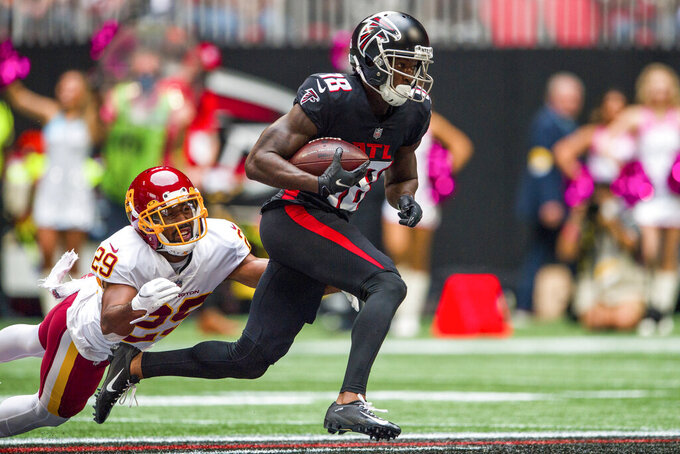 FILE - Atlanta Falcons wide receiver Calvin Ridley (18) runs the ball as Washington Football Team cornerback Kendall Fuller (29) defends during the first half of an NFL football game on Oct. 3, 2021, in Atlanta. Ridley is getting a fresh start in Jacksonville, although it's unclear when he will be allowed to play again. The Jaguars made a complex deal to land Ridley just before the NFL trading deadline Tuesday, Nov. 1, 2022, according to a person with knowledge of the situation. (AP Photo/Danny Karnik, File)

JACKSONVILLE, Fla. (AP) — Suspended Atlanta receiver Calvin Ridley is getting a fresh start in Jacksonville, although it's unclear when he will be allowed to play again.

The Jaguars made a complex deal to land Ridley — and potentially give quarterback Trevor Lawrence a true No. 1 receiver in 2023 — just before the NFL trading deadline Tuesday.

“This is an opportunity to add a proven playmaker to our already talented wide receiver room as we continue to build our roster for 2023 and beyond," Jaguars general manager Trent Baalke said in a statement. "We are looking forward to finishing strong this season and integrating Calvin into our program at the appropriate time.”

A person with knowledge of the trade said compensation to the Falcons ranges between a second-round pick in 2024 and a sixth-rounder. The person spoke to The Associated Press on condition of anonymity because details had not been made public.

The draft pick is contingent on when Ridley gets reinstated, how much he plays in 2023 and whether he signs a long-term deal with the Jaguars, the person said.

Ridley tweeted “Duuuval” with two emojis of faces with steam coming from both nostrils, relaying the team’s rallying cry.

NFL Commissioner Roger Goodell suspended Ridley in March for at least the 2022 season after a league investigation determined Ridley bet on NFL games in 2021 while away from the team addressing mental health concerns. The league said the suspension will carry “through at least the conclusion of the 2022 season.”

The NFL said the betting took place during a five-day period in late November 2021. Ridley was placed on the non-football illness list following Week 8 last season, which ended Nov. 1.

Ridley responded on his Twitter account that day, saying “I bet 1500 total I don’t have a gambling problem.”

A league investigation uncovered no evidence inside information was used or that any game was compromised by Ridley’s betting. Nor was there evidence suggesting Falcons coaches, players or staff were aware of Ridley’s betting activity.

“As our team continues its growth, we continue our daily focus on improving our roster and believe this move is the best decision to make at this time,” Falcons general manager Terry Fontenot said.

“We appreciate Calvin’s contributions to the organization and wish him well on his next steps.”

Ridley may petition for reinstatement after Feb. 23, 2023.

The suspension wasn’t the first time Ridley was unavailable to the Falcons. He sat out the final two months of the 2021 season and explained his absence in a Twitter post that read, “I need to step away from football at this time and focus on my mental well being.”

Ridley was Atlanta’s 2018 first-round draft pick from Alabama. He had 90 catches for 1,374 yards and nine touchdowns in 2020. He had only 31 receptions for 281 yards and two touchdowns before sitting out the final two months of the season.

He is scheduled to count $11.1 million against Jacksonville's salary cap in 2023, which is the final year of his rookie deal.

The Jaguars have Christian Kirk, Zay Jones and Jamal Agnew under contract next season, but the three are considered complementary receivers.