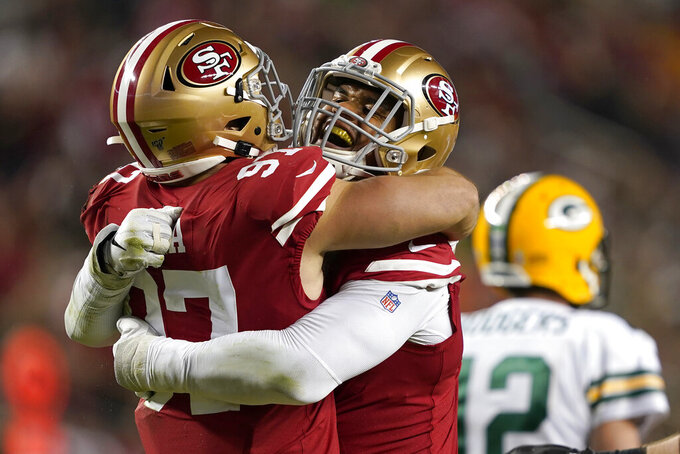 Lamar Jackson vs. Nick Bosa. The NFL's most dynamic offense against one of its stingiest defenses. A rematch of a Super Bowl played seven years ago and a possible preview of another.

The game Sunday between the San Francisco 49ers (10-1) and the Baltimore Ravens (9-2) is one of the premier matchups of the entire season, even if it won't get the national television exposure it deserves.

The game will be played in the early window after the league opted to flex the Oakland-Kansas City game into the doubleheader slot and kept the matchup between New England and Houston in prime time.

That takes no luster off a matchup between two of the league's dominant teams.

This matchup is unprecedented in many ways, the first time two teams will meet coming off wins of at least 28 points against teams with winning records, according to the Elias Sports Bureau.

The 49ers dealt a prime-time beatdown to the Green Bay Packers last Sunday, forcing Aaron Rodgers into the least efficient game of his career in a 37-8 victory.

The Ravens answered the next night in Los Angeles by becoming the first team in 11 years to score touchdowns on its first six drives in a 45-6 romp over the Rams.

It's also the first time since the merger that teams outscoring opponents by at least 15 points per game met this late in the season.

The Niners have done it in large part thanks to a dominant defense that has an NFL-high 44 sacks. A deep line led by Bosa is helping hold opponents to the fewest net yards passing per game (136.9) in 37 years.

The Ravens are relying more on Jackson and the offense. Baltimore is averaging more than 40 points per game over the past five contests, with four of those games coming against teams with winning records.

Jackson has been nearly unstoppable, averaging 7.1 yards per carry, posting a 111.4 passer rating and accounting for 30 touchdowns in his first full season as a starter.

The showdown between the 49ers and Ravens is one of six games this week featuring a pair of winning teams squaring off, including the Thanksgiving game between Buffalo (8-3) and Dallas (6-5).

On Sunday, Tennessee (6-5) travels to Indianapolis (6-5) in a matchup of AFC South teams fighting for the division title or a wild-card spot, New England (10-1) visits Houston (7-4) in a matchup of first-place teams, and Oakland (6-5) visits Kansas City (7-4) in an old-school AFC West battle with first place on the line.

"This is great for NFL fans and football and we're excited to have a meaningful game this time of year against the Chiefs," Raiders coach Jon Gruden said.

The week ends with an intriguing Monday night matchup between two of the NFC's top teams — Minnesota (8-3) at Seattle (9-2).

The Texans have lost eight straight to the Patriots, but both games with Deshaun Watson at quarterback have been one-score contests.

Watson will have his hands full with a Patriots pass defense that has shut down almost every opponent. Cornerback Stephon Gilmore held Dallas' Amari Cooper without a catch last week and likely will get the assignment against DeAndre Hopkins, who’s coming off a two-touchdown game.

The questions in New England are about Tom Brady and the offense for a change. The Patriots have been held to 20 points or fewer in three straight games for the first time in eight years. It hasn't happened four in a row since 2002, the only year Brady failed to make the playoffs as a starter.

The league's top two rated passers square off when Kirk Cousins (114.8) and the Vikings visit Russell Wilson (112.1) and the Seahawks.

Both teams are in good position to make the playoffs but are hoping to do enough down the stretch to win their divisions rather than get in as wild cards.

Minnesota is tied with Green Bay in the NFC North, while Seattle is a game back of San Francisco in the NFC West.

This game lost a little luster when the Raiders stumbled last week in a 34-3 loss at the Jets. But they can still rebound and move into a tie for first with a win at Arrowhead.

The problem is Oakland has lost six straight in Kansas City, including all five with Derek Carr at quarterback. All of those games have come in December or January when Carr typically struggles in colder weather.

Gruden is at a loss for how to simulate those conditions in California.

"I'm not a genius," he said. "I'm not Thomas Edison, I don't know how to do that. We're just trying to show pictures of people that are cold that deal with cold. I don't know. We're not going to overanalyze it."

The Colts have lost three of four since a promising start to the season.

The second game in three weeks between these AFC North rivals will be notable more for who's not playing than who is, even though both teams remain in the AFC wild-card race.

The first meeting won by Cleveland was marred by a brawl at the end of the game that featured Cleveland's Myles Garrett ripping off Pittsburgh quarterback Mason Rudolph's helmet and hitting him in the head with it. Garrett has been suspended indefinitely, Pittsburgh center Maurkice Pouncey will serve the final game of his two-game suspension for kicking Garrett in retaliation, and Rudolph has been benched for Devlin Hodges after throwing five interceptions the past two games.

This game features two quarterbacks picked No. 1 overall going in very different directions. Los Angeles' Jared Goff, the top pick in 2016, has regressed after throwing 60 touchdowns the past two years and leading the Rams to the Super Bowl last season. He has no TD passes and five interceptions in November and his three straight games with no TD passes and at least one interception are tied for the longest streak in the NFL since Curtis Painter did it four games in a row for Indianapolis in 2011.

This year's top pick, Kyler Murray, is improving each week and has thrown only one interception in his past seven games. He has a 106.7 rating his past three games, including two marks in excess of 100 against the NFL's stingiest pass defense in San Francisco.

The Packers' bid for a first-round bye in the NFC took a serious blow with a loss in San Francisco in which Rodgers has the least efficient game of his career — an average of 3.2 yards per pass attempt.

Things should come much easier against a Giants team that has one of the league's worst defenses and allowed Chicago's Mitchell Trubisky to throw for 278 yards last week.

After losing two straight to powerhouses New England and Seattle, the Eagles get a little break with a game against the Dolphins. Injury-plagued Philadelphia has only one game remaining against a team with a winning record but has little margin for error left in the NFC East race with Dallas.

The Dolphins have allowed 78 points the past two weeks after holding the Jets and Indianapolis to a combined 30 during their only two wins of the season.

The Jaguars invested heavily in quarterback Nick Foles this season but have lost all three of his starts, including back-to-back lopsided losses after he returned from a broken collarbone.

Tampa Bay has at least been exciting thanks to Jameis Winston, the second quarterback since the merger to have at least 20 TD passes and 20 interceptions through the first 11 games.

Rookie Dwayne Haskins is coming off his first career win, against Detroit last week, but is getting more attention for missing the final kneeldown because he was taking a selfie with a fan.

That might be a good thing because Haskins wasn't very effective, even in a winning cause. He went 13 for 29 for 156 yards and an interception, but did lead the drive for the winning field goal.

Carolina has lost three in a row and quarterback Kyle Allen has thrown nine interceptions in his past five games after having none in his first five career starts.

After hitting rock bottom with a loss at winless Miami in the beginning of November, the Jets have responded in big fashion with three straight victories, scoring 34 points in each of them.

Second-year quarterback Sam Darnold has gone from "seeing ghosts" in a four-interception prime-time meltdown against New England last month to posting a 117.2 passer rating the past three games for the fourth-best mark in the league.

The winless Bengals are going back to Andy Dalton at quarterback after rookie Ryan Finley failed to reach 200 yards passing in any game during a three-game losing streak.

This AFC West rivalry is mostly a dud this year. Philip Rivers' seven interceptions the past two weeks have basically knocked the Chargers out of playoff contention.

The Broncos, who won the first meeting in Los Angeles, were never really in contention this season after an 0-4 start.