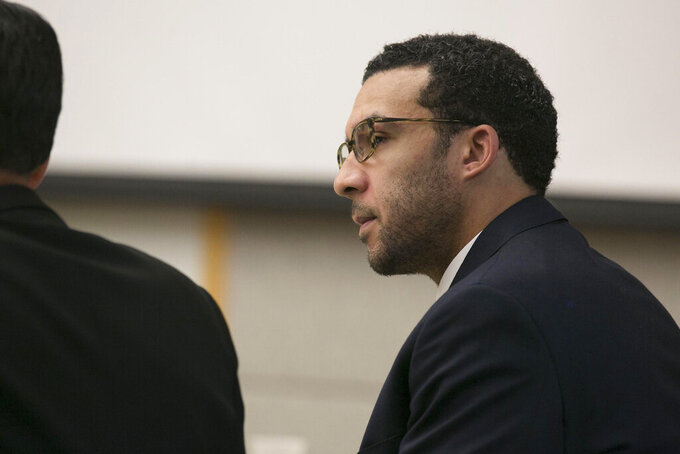 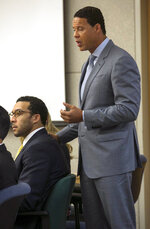 VISTA, Calif. (AP) — A female hitchhiker who accused former NFL player Kellen Winslow Jr. of raping her after he picked her up testified Tuesday that she did not flee or defend herself because the muscular football star had threatened to kill her.

Winslow's attorneys said the two had consensual sex and suggested she had a drinking problem. They said she has given inconsistent statements and lied to the jury about being sober for 30 years, pointing out that she has been arrested 11 times for public intoxication.

The woman, identified as Jane Doe 1, is the first of five accusers expected to take the stand.

Winslow is accused of raping three women and exposing himself to two others. All are expected to testify.

The former football star, and son of Hall of Famer Kellen Winslow, has pleaded not guilty to 12 counts.

The 55-year-old Jane Doe 1 described in detail how Winslow drove her to a shopping center parking lot after picking her up in March 2018 and then raped her in his vehicle.

"He threatened to kill me, and I really believed that he would have," she testified.

Winslow's attorney Marc Carlos in cross-examining the woman asked if she remembered taking the witness stand at a preliminary hearing in July and pointing at defense lawyer Brian Watkins when asked to identify her attacker.

Winslow and Watkins are both black.

"Yes, I made a mistake," the woman said Tuesday.

Carlos asked if she had been drinking before Winslow gave her a ride. She said she had not.

He asked if she ever drank. She also said no.

After the jury was excused for lunch, Carlos told the judge the witness should be dismissed.

"It's not about her drinking, it's about her lying," Carlos said.

Judge Blaine Bowman said he would allow the defense to question her about five arrests for public intoxication dating back to 2014. He said he was allowing the questioning because her statement about being sober 30 years had made her credibility an issue.

When asked about the arrests, she told the court "I was not sober every day for the past 30 years" but added later that she is not the one on trial.

Prosecutor Dan Owens said the woman's desire to hide her drinking should not obscure the fact that she was attacked.

The woman took the stand after a DNA expert testified that traces of Winslow's sperm were found on a pair of pants the woman provided to authorities after reporting she was raped.

She refused to undergo a physical examination at the time.

On Tuesday, Jane Doe 1 struggled to identify his Hummer when shown a photograph and said he called himself Dominic and later said he identified himself as Michael.

She said after they parked behind a grocery store, Winslow got out of the vehicle and climbed over a 5-foot-high chain link fence to a dirt patch covered in ice plant where he said they would have sex.

"So the man you are afraid of was now separated from you by a fence taller than you?" Carlos asked.

She told the defense she could not explain why she continued to follow him and then climbed back over the fence again after he decided to go back to the vehicle where he raped her. She also said she does not know why she didn't call 911 even though she had a cellphone with her.

"I was terrified," she said.

Winslow later befriended a 59-year-old homeless woman who said he sodomized her a year ago, according to the prosecution. Shortly after that a woman said she had been sexually assaulted by Winslow when she was 17 in 2003.

Watkins contended the women were trying to prey on Winslow amid news coverage of the rape allegations and that their accounts have been inconsistent.

Drafted No. 6 overall in 2004 by Cleveland, Winslow broke his right leg in his rookie season then sustained a serious right knee injury in a motorcycle accident that offseason.

He played for Cleveland, Tampa Bay, New England and the New York Jets.