Flacco to start again for Jets in Week 2 at Browns 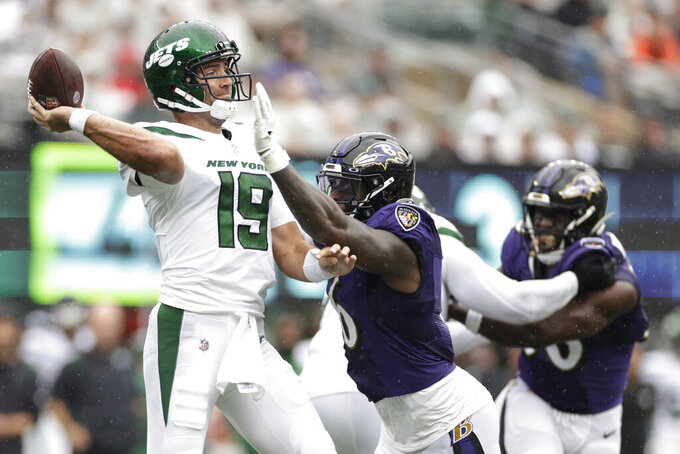 FLORHAM PARK, N.J. (AP) — The New York Jets are sticking with Joe Flacco as their starting quarterback against the Cleveland Browns on Sunday.

Coach Robert Saleh announced the decision Wednesday to stay with Flacco this week despite a less than inspired performance by the 37-year-old quarterback and the rest of the offense in a 24-9 loss to Baltimore in the regular-season opener.

“There were a lot of things that we as a team could have done to help out a lot during the game, too,” Saleh said. “We’ll give it another run and I think Joe will be a lot better.”

Flacco, starting for the injured Zach Wilson, was 37 of 59 for 307 yards and one touchdown — in the game's final minute — with one interception while facing constant pressure from the Ravens. Flacco was sacked three times and hit 11 times behind a shuffled offensive line, and his lack of mobility didn’t help.

“Listen, my job as the quarterback is to put the ball in the end zone and score points and put our team in position to win,” Flacco said. And any time that doesn't happen, it kind of starts and ends with your quarterback position, and that's myself.

“So, it was obviously a frustrating day not being able to do that as well as we wanted to.”

Many fans chanted for Mike White to replace Flacco last Sunday at MetLife Stadium — and took to social media and sports talk radio this week for the backup to play at Cleveland.

Saleh left the possibility open Monday when he said all positions were being evaluated, including quarterback, but couched it by saying Flacco would “likely” get a second start. Saleh said the Jets never considered making a change from Flacco.

“Joe's our quarterback,” Saleh said, adding that the team is focused on preparing for the Browns.

Wilson had arthroscopic knee surgery last month and also is recovering from a bone bruise in his right knee after being injured in the preseason opener at Philadelphia on Aug. 12. He's expected to be sidelined at least two more games, with a possible return at Pittsburgh on Oct. 2.

Wilson was limited in practice Wednesday while participating in light drills, but not team drills yet.

The Jets' struggles against the Ravens were far from just on Flacco, who was hurt by multiple dropped passes, fumbles and poor protection — “a comedy of errors,” Saleh said. Flacco's interception occurred when tight end Lawrence Cager slipped on the rain-soaked turf.

“When you look back at the game, when he had a clean pocket, he was very, very efficient,” Saleh said of Flacco. “Part of the clean pocket is the offensive line's responsibility to give it to him and for him to just deliver the ball where it needs to and get off of certain reads. So it was a bunch of different things.”

New York also abandoned the run early, running 62 pass plays out of 79 behind a line that had George Fant flipping from right tackle to left during the week when Duane Brown injured a shoulder and was placed on injured reserve. Rookie Max Mitchell also was forced into starting on the right side in his NFL debut.

The line will have its hands full again this week while facing the Browns and edge rusher Myles Garrett, who had two sacks in Cleveland's season-opening win at Carolina.

Flacco, who spent 11 seasons in the AFC North with Baltimore, has some history of success against Cleveland. His previous start against the Browns came in 2018 while with the Ravens — a loss — but his 17-3 career regular-season mark against them is his most wins vs. any NFL team.

Meanwhile, Flacco remains winless as a starter for the Jets having lost his first six starts with New York going back to the 2020 season.

“It wasn't his best performance,” Saleh said of Flacco's game Sunday. “But it wasn't as bad as people think it was.”