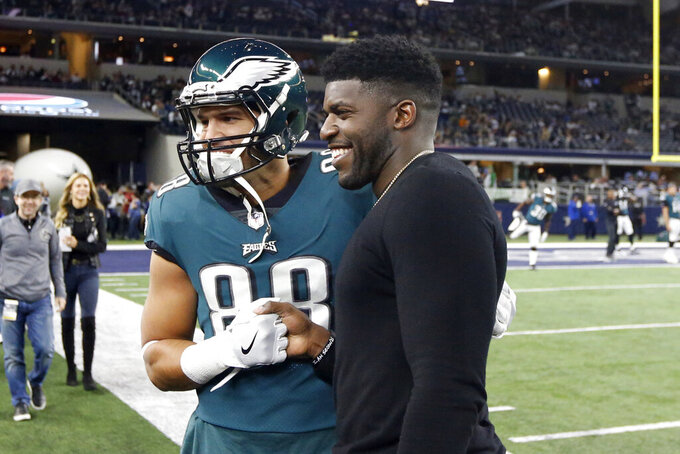 FILE - In this Nov. 19, 2017, file photo, then-Philadelphia Eagles tight end Trey Burton (88) has a photo taken with former Eagles linebacker Emmanuel Acho prior to an NFL football game against the Dallas Cowboys in Arlington, Texas. Acho has enjoyed a spectacular rise off the field, beginning with his desire to take on racism. Acho celebrated his 30th birthday this week with the official release of his book: “Uncomfortable Conversations with a Black Man.” His YouTube series with the same name has already amassed over 65 million views in five months.(AP Photo/Michael Ainsworth, File)

Emmanuel Acho is making his most impactful tackle six years after playing his last game in the NFL.

The former Philadelphia Eagles linebacker has enjoyed a spectacular rise off the field, beginning with his desire to take on racism. Acho celebrated his 30th birthday this week with the official release of his book: “Uncomfortable Conversations with a Black Man.” His YouTube series with the same name has already amassed over 65 million views in five months.

Acho launched his video series in response to the death of George Floyd. His guests have included actor Matthew McConaughey and NFL Commissioner Roger Goodell. Acho’s conversations with prominent white men about racism in America caught Oprah Winfrey’s attention. She called Acho and they turned the video series into a hardcover book published by her imprint.

Acho, the host of FS1’s “Speak for Yourself,” grew up in Texas the son of Nigerian immigrants. He was drafted out of Texas in the sixth round by Cleveland in 2012 and played 20 games with the Eagles in 2013-14. His brother, Sam Acho, played linebacker for Arizona, Chicago and Tampa Bay from 2011-19.

Acho covers topics in the book ranging from white privilege to interracial families. He recalls standing up to a teammate's bullying in Philadelphia in a chapter on reverse racism.

“Reverse racism doesn’t exist. Racism can exist but reverse racism is a man-made concept of nothingness,” Acho said. “I tell the story of my second year in Philly. There’s a defensive lineman. He just didn’t like me for whatever reason, totally different. I don’t really go out. He’s a go-out kind of guy. I’m a little more reserved. He’s a little more loud, whatever the case may be. And finally, after practice one day, I say to him: ‘You’re the worst teammate in the history of teammates.’

“Imagine how silly it would sound if someone said: ‘Emmanuel, you were being a reverse bully.’ No, I was just simply standing up for myself. Let us not mistake Black people, Brown people standing up for themselves against the likes of oppression and systemic injustice and racism. Let us not mistake that for reverse racism. Now, if Black people are going to be prejudiced against white people, that’s racism. But reverse racism makes no sense.”

Acho also praised the NFL for its social justice initiatives and stays in touch with Goodell’s team.

“I don’t think racial reconciliation is a finish line we’ll cross,” Acho said. “I think it’s a road that we’ll travel and I’m just glad that the NFL is now choosing to travel that road. Some people may condemn the NFL for the pace in which they’re traveling on the road, but I am glad that we’re choosing to travel that road, because unlike a football game, we won’t be able to look up and say: ‘Touchdown, we scored against racism.’ But what we do have to say is: ‘OK, we’re marching, we’re marching, we’re marching down the field. Let’s all just march down the field toward reconciliation together.’”