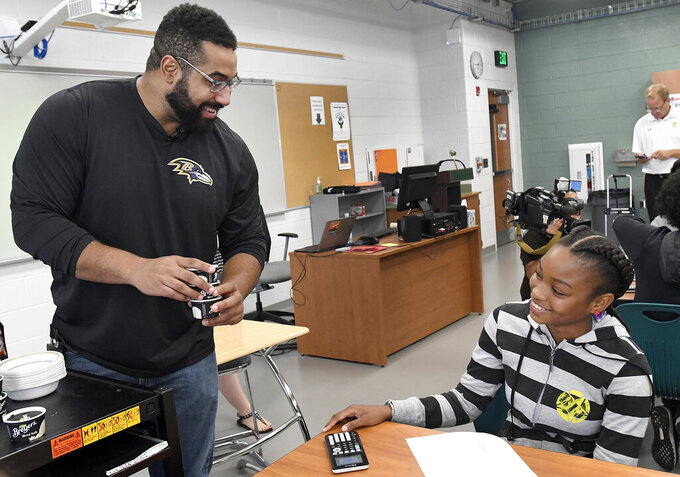 FILE - Baltimore Ravens lineman and math scholar John Urschel, left, hands out ice cream to Chelsy Valerio, 14, of Baltimore, during a lesson at Dundalk High School during the launch of Texas Instruments' STEM Behind Cool Careers series in Baltimore, in this Tuesday, July 18, 2017, file photo. John Urschel has found that a master's degree in mathematics, his stature as an accomplished author and his pending PhD at MIT isn't necessarily enough to sell young students on the benefit of crunching numbers. What really makes him interesting to most kids is that he's a former NFL player who opted to immerse himself in math. (Steve Ruark/AP Images for Texas Instruments, File)

John Urschel has found that a master’s degree in mathematics, his stature as an accomplished author and his pending doctorate from the Massachusetts Institute of Technology isn’t necessarily enough to sell young students on the benefit of crunching numbers.

What really makes him interesting to most kids is that he’s a former NFL player who opted to immerse himself in math.

“In the broader context, it helps because it makes me more believable. It shows I have an interest in doing other things,” Urschel said. “Often, a mathematician is too abstract for young people.”

Urschel recently drew 700 participants worldwide for an event staged by the National Museum of Mathematics (MoMath) called Bending the Arc. Urschel is a member of the board of trustees at MoMath and serves as the organization’s ambassador by extolling the virtues of the subject to children of all backgrounds, particularly African-Americans.

“My job in some sense is to teach and encourage young people in math, which is very close to my heart,” Urschel said. “Math for its own sake is a pretty reasonable pursuit because no matter what field you go into, you really need to able to think reasonably to some degree.”

His vast education and independent study of mathematic equations enable Urschel to speak expertly about calculation and intuitive thinking. Throw in the fact that he played three seasons as an offensive lineman with the Baltimore Ravens, and you’ve got a combination that’s as sound as 1+1=2.

“John has a lure because he was a professional football player, and we really honor that in this country,” said Cindy Lawrence, CEO and executive director of MoMath. “People are very excited to meet someone who played professional football. So that’s the hook. And then we complete that with someone who is enthusiastic and eloquent and speaks wonderfully about the benefits of math.”

Now 29, Urschel starred at Penn State before being selected by the Ravens in the fifth round of the 2014 NFL draft. He played 40 games with Baltimore, starting 13, and enjoyed just about every minute of it.

And then, in July 2017, Urschel abruptly retired and turned his full attention toward his studies at MIT.

“I have amazing memories of playing in the NFL. There’s nothing more special than to play a sport at a high level,” he said. “Three years was the perfect time. I have a pension, I’m vested, I really got the experience.

“I’m glad I decided to go into the NFL instead of going straight to a Ph.D., which I was thinking about. I’m glad I got out when I did because I have a lot of things in math that I want to do. I want to prove myself as a mathematician.”

The potential for concussions and a study that showed the prevalence of chronic traumatic encephalopathy (CTE) in deceased players also were factors in his exit from the football.

“The cost of an NFL season on your body, not just your head, was definitely something I had to think about,” Urschel said.

Urschel wrote a book called “Mind and Matter: A Life in Math and Football” that was published last year. He got it done while studying at MIT and remains on course to graduate this spring.

“My job is going to be a professor at some math department or computer science department where my primary responsibility will be to perform research, and I hope be able to teach the values and importance of broader sciences,” he said.

Urschel will always be welcomed at the New York City-based National Museum of Mathematics.

“He’s very passionate about the museum and encouraging people of all backgrounds to engage in mathematics and consider a career in math,” Lawrence said. “From the day I first met him, I was impressed by his friendliness, his intelligence, his enthusiasm.”

Those qualities, along with his past, enabled Urschel to make a lasting impression on a group of middle school kids during one of his initial visits to the museum.

“John talked about playing professional football, which many of them thought would be a great career at first,” Lawrence recalled. “And by the end of John’s 10-minute talk, he had them convinced they all wanted to go to school to study math.”

“One Good Thing” is a series that highlights individuals whose actions provide glimmers of joy in hard times — stories of people who find a way to make a difference, no matter how small. Read the collection of stories at https://apnews.com/hub/one-good-thing