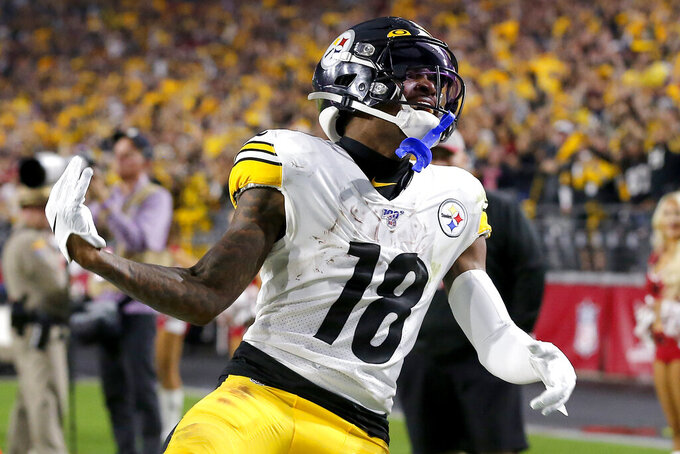 Pittsburgh Steelers wide receiver Diontae Johnson (18) celebrates his touchdown against the Arizona Cardinals during the second half of an NFL football game, Sunday, Dec. 8, 2019, in Glendale, Ariz. (AP Photo/Rick Scuteri)

PITTSBURGH (AP) — Sean McDermott remembers lining up across from Mike Tomlin and wanting to do everything he could to impress everyone watching, from the William & Mary coaches to his teammates to Tomlin himself. It comes with the territory when you're a freshman defensive back and the wide receiver you're facing happens to be an upperclassman and a team captain.

“We had our battles,” said McDermott, who played with Tomlin for two seasons in 1993-94. "I was a walk-on, he was a scholarship athlete. He was established and I was just trying to get a pair of cleats.”

A quarter century later, the stage is a much different one.

Like McDermott during his early college days, the Buffalo Bills are the upstart in search of some street cred heading into a rare prime-time visit to Pittsburgh to face Tomlin and the Steelers. A win and the Bills (9-4) clinch their second playoff berth in McDermott's three seasons. A victory by the surging Steelers (8-5) and Pittsburgh leapfrogs Buffalo for the AFC's top wild-card spot.

McDermott and Tomlin have remained in touch during their respective professional careers, with McDermott occasionally reaching out to Tomlin in search of advice. All of which is kind of funny to Tomlin, who remembers McDermott as the more focused of the two when their playing careers for the Tribe overlapped in 1993 and 1994.

“I was just trying to have fun,” Tomlin said with a laugh.

He still is. Tomlin might be in the midst of the most remarkable coaching job of his 13-year tenure. Last week's victory over Arizona assured the Steelers of a 16th straight season season finishing .500 or better — the second-longest active streak in the league behind New England — and they've done it despite an avalanche of injuries on offense that has forced Pittsburgh to reinvent itself on the fly.

Undrafted rookie free agent and budding cult hero Devlin “Duck” Hodges is the quarterback. Two other rookies — Benny Snell and Kerrith Whyte — have carried the bulk of the running game since James Conner injured his right shoulder before Halloween. Third-round pick Diontae Johnson electrified while accounting for both of Pittsburgh's touchdowns against the Cardinals. Pittsburgh isn't lighting up scoreboards as it did during the “Killer B” era led by Ben Roethlisberger, Antonio Brown and Le'Veon Bell. Yet the Steelers are still in the thick of things in mid-December, just like always.

"In the locker room, no one doubted him one bit, ever," Steelers outside linebacker Bud Dupree said. "The outside world probably doubted him because he didn't win the Super Bowl every year. But it's the Steelers. People expect the Steelers to win the Super Bowl every year. But if he was on another team, he would be coach of the year plenty of times. But being here, expectations are a little higher. He really handled the pressure.”

Something McDermott is learning how to do in Buffalo. From the moment he and general manager Brandon Beane were hired in 2017, they've talked about building the franchise into consistent contenders. A victory over McDermott's college teammate turned mentor would be another symbolic step in the process.

“I think we’ve moved that needle drastically since we’ve got here and in the entire building," McDermott said. “It’s been a long time since this organization has been in a position like this, this late in the season, and we don’t take it lightly.”

Hodges won over Tomlin and the rest of Pittsburgh's coaching staff with his pragmatic approach. He has thrown just two interceptions and taken just six sacks in his five appearances. Yet he's starting to evolve from caretaker to difference-maker. Hodges made a handful of clutch plays against the Cardinals, including an improvised third-down completion to Johnson that helped set up the game-sealing field goal.

Still, the Alabama native might face a new challenge against the Bills: playing in the cold. The forecast calls for snow showers in the morning with gusty winds and temperatures in the 20s at kickoff. Hodges, however, doesn't expect to be bothered. The avid hunter says trips to Saskatchewan, Canada, have left him well-prepared for whatever comes.

Buffalo's rise has caught the attention of the television networks. The league flexed the meeting with Pittsburgh from the early afternoon window to prime time a couple weeks ago and moved the team's visit to New England next weekend from Sunday to Saturday. The Bills haven't played on Sunday night in 12 years, when they were dismantled by the Patriots 56-10.

“That’s something we haven’t experienced as a team yet,” said quarterback Josh Allen, who was 11 the last time Buffalo played under the Sunday night lights. “It’s definitely going to be a learning adjustment for us, but I really feel like the schedule is the only thing that changes.”

Trey, Terrell and Tremaine Edmunds will become the first trio of brothers to be active in the same NFL game in nearly 100 years when they run on to Heinz Field in front of a crowd that will include over 30 friends and family to commemorate the occasion.

Trey, the oldest, is a backup running back and special teams ace for Pittsburgh. Terrell, the middle brother, is the Steelers' starting safety. Tremaine, the youngest, is a second-year linebacker coming into his own for one of the NFL's top defenses. Terrell is curious to see where their parents — former NFL tight end Ferrell Edmunds and wife Felicia — place their allegiance.