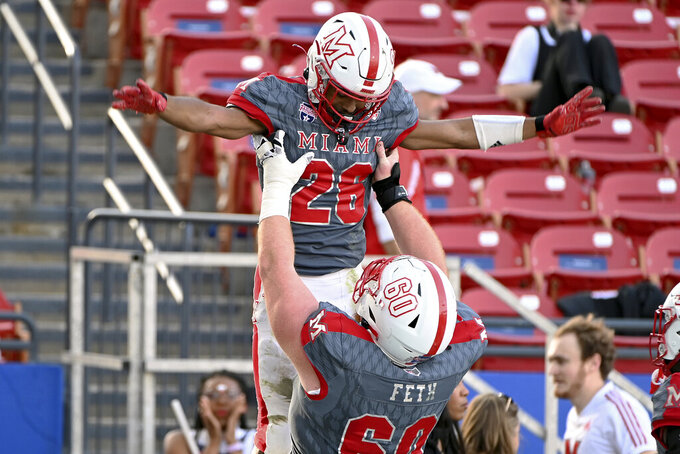 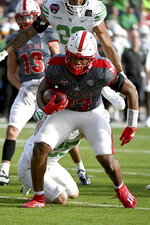 Gabbert, the brother of former NFL quarterback Blaine Gabbert, threw a 5-yard scoring pass to Kenny Davis late in the second quarter and an 11-yarder to Nate Muersch early in the third quarter for Miami (7-6), which won a bowl game for the first time since the 2010 season.

Nicholson made a 48-yard field goal on the RedHawks’ opening drive, which was one yard shy of his season-high, and a 36-yarder in the second quarter.

Austin Aune and Isaiah Johnson scored on runs of 2 yards and 1 yard for the Mean Green (6-7). Aune was 15-of-32 passing for 228 yards and two interceptions.

North Texas played without two senior starters, running back DeAndre Torrey and safety Makyle Sanders, for unstated reasons. Torrey had averaged 101.3 rushing yards per game, 41% of the 245.5-yard team average that ranked fourth in the FBS.

The Mean Green had 32 rushes for a season-low 89 yards, led by Aune’s 28 yards. North Texas had averaged 50 rushes per game this season.

The bowl game, played at Toyota Stadium, which had hosted the Frisco Bowl on Tuesday night, was hastily created a few weeks ago when 83 NCAA Division I teams were eligible to fill the slots of the 41 NCAA-approved postseason games.

Miami: The RedHawks were a two-point conversion away from winning the MAC East. They extended their streak of seasons at .500 or better to four straight.

North Texas: The loss ended a five-game Mean Green winning streak following a 1-6 start, and leaves them with their third straight losing season. Coach Sean Littrell is 0-5 in bowls in six seasons.