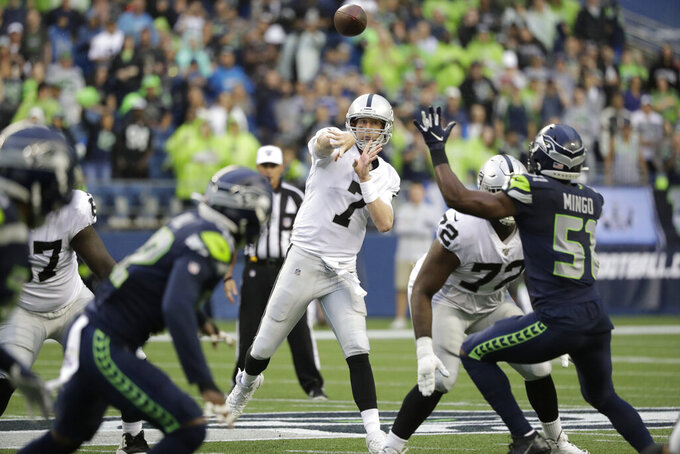 SEATTLE (AP) — Geno Smith marched the Seattle Seahawks down the field, capping the drive with his second touchdown throw.

The voice in his helmet calling plays and directing him on the scoring drive: Russell Wilson.

Smith appeared to lock up the backup job in Seattle throwing a pair of first-half touchdown passes before limping off with a minor knee injury, and the Seahawks closed out the preseason with a 17-15 win over the Oakland Raiders on Thursday night.

But Smith had to be tended to on the field and walked off with a slight limp late in the second quarter after being sacked by Gabe Wright. The medical staff was looking at Smith's left knee that underwent surgery earlier this month to have a cyst removed. Smith was on the sideline during the second half with ice on his knee.

Smith said he was rolled on and was unsure if he'd need any scans.

"It feels fine right now. Really scary incident there, got rolled up on," Smith said. "Just had to take a second. Kind of scared me."

Smith finished 4 of 7 for 107 yards and his health will be important as Paxton Lynch finished the preseason with a dud. After missing last week's game due to a concussion, Lynch was 1 of 7 for 4 yards.

It was entirely backups for both teams in the preseason finale. Oakland left a significant chunk of its roster behind in the Bay Area, while many of Seattle's starters went through pregame warmups before becoming spectators.

Oakland quarterback Mike Glennon played only the first quarter before giving way to Nathan Peterman. Glennon was 9 of 13 for 78 yards and led Oakland on a field-goal drive. Peterman was 20 of 27 for 158 yards. James Butler ran for a 3-yard touchdown with 1:43 left to pull Oakland within 17-15, but Branden Jackson sacked Peterman on the 2-point conversion attempt.

"I think overall three, four preseason games played pretty well," Glennon said. "The first game, I'd like to have a couple throws back, but other than that, moved the ball well tonight. I think Nate played well tonight, too. We're all pulling for each other here, it's not like what some people may think, we're all in this together."

Oakland coach Jon Gruden said he had not made a decision yet on the backup to Derek Carr.

"Really pleased tonight, our red zone execution tonight wasn't very good, for a lot of reasons, we didn't practice extremely hard for this game on it," Gruden said. "We didn't have a vast amount of plays to choose from, but moving the ball and doing some good things, I thought both quarterbacks moved the rock and put our team in position to score and took care of the ball."

Seattle rookie safety Marquise Blair played the first defensive series but did not return after appearing to aggravate a hip pointer, coach Pete Carroll said. Blair had been slowed by an injury first described as a back injury for the past two weeks and did not play in the third preseason game against the Chargers.

Linebacker Shaquem Griffin aggravated a lingering knee injury and was limited to a few special teams plays. Carroll said the hope was for Griffin to get snaps at linebacker and that he'll need additional exams.

Oakland cornerback Nevin Lawson appeared to injure his right leg late in the third quarter away from the play. Lawson walked directly to the locker room.

Keelan Doss and Keon Hatcher led Oakland with six catches each. Doss was targeted 12 times. No Seattle receiver had more than one catch, with the best being Jazz Ferguson's 41-yard reception using his 6-foot-5 frame to overpower a smaller defensive back.

Seattle running back C.J. Prosise had another solid game, rushing for 42 yards on five carries including a 30-yarder.

After being quiet for most of the preseason, Seattle rookie linebacker Ben Burr-Kirven had a standout final preseason game. Burr-Kirven, a fifth round pick, had 12 total tackles and a sack in his most extensive playing time of the preseason.

"It helps games like these where you can get the real reps. ... Hopefully it's something I can keep building off," Burr-Kirven said.

Carroll finally had a successful challenge of a pass interference call in the second quarter. On review, it was determined the pass was tipped at the line of scrimmage by Burr-Kirven and the flag against Jeremy Boykins was picked up. Carroll had unsuccessfully challenged pass interference a couple of times previously.