Giants are winless after two games for fifth straight year 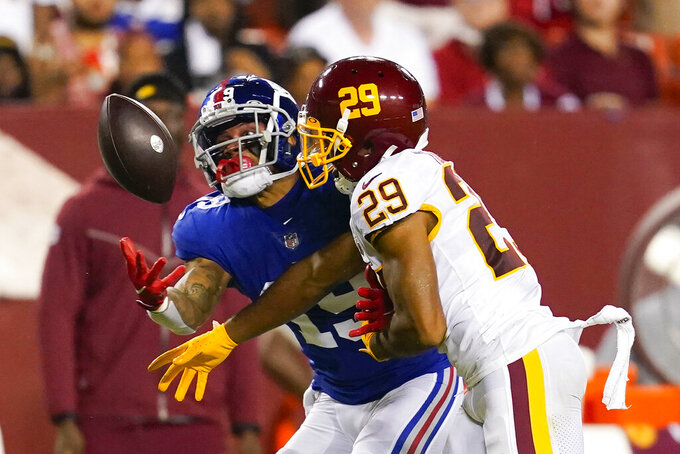 EAST RUTHERFORD, N.J. (AP) — Two games into the season, the New York Giants are in the same unenviable spot as they have been the past four seasons.

They are winless. They are making costly mistakes, and they have a coach — this time Joe Judge — saying the weekly goal is to get better. The assumption is everything will turn around.

History says otherwise. The Giants have not made the playoffs since 2016. They have had four straight losing seasons, and counting the current 0-2 start they have a combined record of 18-48.

It sets up a bleak forecast for the Giants in 2021 with 15 games left in the regular season after Thursday night's crushing 30-29 loss to Washington.

This was a brutal defeat. After missing wide right from 48 yards, Dustin Hopkins got a second chance because of an offside penalty by Dexter Lawrence and kicked a 43-yard field goal on an untimed play to steal the game.

The offside was the last of a number of mistakes that killed the Giants.

New York lost a long Daniel Jones TD run in the second quarter on an iffy downfield holding call. A wide-open Darius Slayton, who caught a TD earlier, could not catch a 43-yard Jones pass in the end zone that would have given New York a 10-point lead with less than seven minutes to play. The Giants had to settle for Graham Gano's fifth field goal after James Bradberry's interception and return gave them the ball at the Washington 20 with 2:16 to play and down a point. The offense used 16 seconds and gave Washington a final shot — or two as it turned out.

That's 11 points lost in a one-point game, eight for the Giants and three for Washington.

“Nobody in the locker has lost any steam, lost any desire or hunger,” Slayton said Friday. “I think ultimately, things in life don’t always show immediate return, but I definitely think that going forward, that stuff will start to show up in wins, and games, and us getting the job done going forward.”

It's an attitude the players are embracing.

Speaking to the media for the first time since his penalty, Lawrence initially indicated he felt he was not offside. He later accepted responsibility.

“I can’t make that mistake,” he said. “I don’t want to let my brothers down and let my family down. It’s just unfortunate turn of events. So, I mean, the frustration is there on myself, not because of the call or anything like that. I have to be better in that situation.”

Gano might be the best placekicker in the league right now. He finished last season making 31 of 32 field goals, including his last 30. He added field goals of 23, 47, 52, 55 and 35 in the loss, pushing his streak to 35 and extending his team record.

Teddy Bridgewater and Taylor Heinicke have combined to hit 62 of 82 passes for 575 yards and four touchdowns. In both games, they had wide-open receivers and a lot of time to throw in hitting almost 76% of their throws.

Jones. Danny Dimes completed 22 of 32 passes for 249 yards and ran for 95 yards, a team record for a quarterback in the Super Bowl era. He threw a touchdown and probably should have had another on the slightly overthrown pass to Slayton. He also ran for one and should have had another the same way. He showed guts on a night he was sacked four times and hit seven times. No turnovers, too.

For the second week in a row, defensive coordinator Pat Graham is taking the hit. His group was supposed to carry the Giants.

So far, opponents are averaging 28.5 points and none of the points has been cheap. New York's offense only has turned the ball over once and that was in red zone against Denver last Sunday.

Too many opposing receivers are wide open. There is no pressure on the quarterbacks. Here's the worst statistic: After failing to score on its first two possessions, Washington tallied on six of its last nine, including three of four in the fourth quarter.

C-G Nick Gates, who was just elected a captain for the first time, is almost certainly out for the season. He sustained a gruesome broken left leg in the first quarter, playing left guard. Judge said Gates had surgery Friday morning.

The recent time off should allow tight end Evan Engram (calf) to play for the first time when New York plays on Sept. 26.

163 — yards the Giants gained rushing. Jones had the big chunk. Saquon Barkley added 57 yards on 13 carries, including a 41-yard dash, that showed a flash of him before the ACL injury. Despite losing Gates early, the O-line played well with Billy Price at center and Ben Bredeson replacing Gates at left guard.

The Giants get roughly nine-plus day to fix things before taking on Atlanta on the 26th, a day the team plans to retire the No. 10 jersey of two-time Super Bowl MVP Eli Manning. The schedule gets tougher after that with games against the Saints, Cowboys and Rams. It has the potential to be another long season.