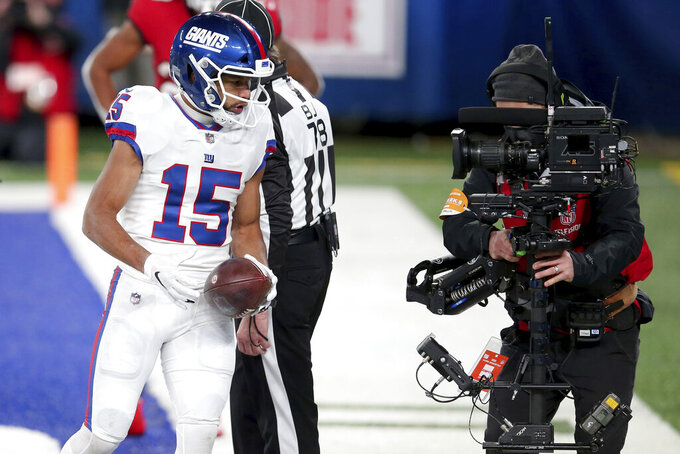 FILE - New York Giants wide receiver Golden Tate (15) talks into a television camera after scoring a touchdown against the Tampa Bay Buccaneers during an NFL football game in East Rutherford, N.J., in this Monday, Nov. 2, 2020, file photo. The New York Giants announced Thursday, March 4, 2021, that they have cut Golden Tate in a move that clears $6.1 million in salary cap space and says goodbye to a wide receiver who never panned out after signing a $37 million contract as a free agent in 2019. (AP Photo/Brad Penner, File)

EAST RUTHERFORD, N.J. (AP) — The New York Giants have cut Golden Tate in a move that clears $6.1 million in salary cap space and says goodbye to a wide receiver who never panned out after signing a $37 million contract as a free agent in 2019.

The 32-year-old Tate confirmed the move in a tweet in which he thanked the organization for its professionalism, told his former teammates to win the NFC East next season, and thanked the New York City metropolitan area fans for their support.

Tate had some problems with the Giants. He missed the first four games of 2019 for using a performance enhancer. He had injuries last season and was benched for a game against Washington after complaining into an end-zone camera following a touchdown catch against the Super Bowl champion Buccaneers that not enough passes were being thrown to him.

He played in 23 games with 14 starts in his two seasons with the Giants. Considering he missed the first four games, the 2019 total was not bad: 49 catches for 676 yards and six touchdowns. Last season was not as good as Tate had 35 catches for 388 yards and two TDs in 12 games.

The Giants also cut inside linebacker David Mayo, who saw his playing time reduced this past season because of injury and the signing of Blake Martinez as a free agent last season. He led New York in special teams tackles (9) in 2020.

New York will save $2.3 million cutting Mayo, who started 13 games in 2019 and two last year. He tied for second on the team in '19 with a career-best 80 tackles (50 solo), including his first two career sacks.