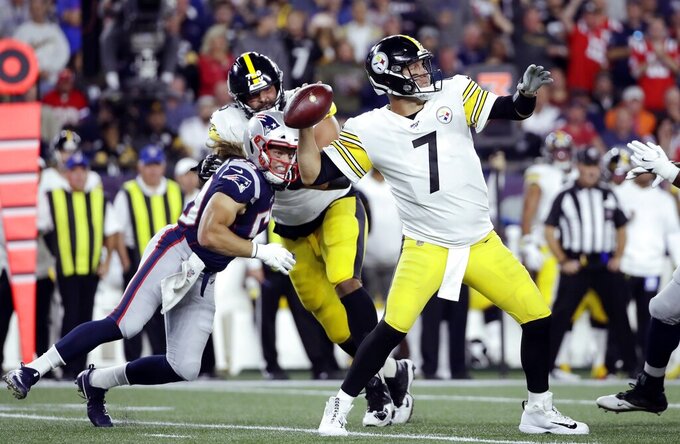 PITTSBURGH (AP) — Ben Roethlisberger delivered the message to Donte Moncrief almost immediately, the Pittsburgh Steelers quarterback's way of letting Moncrief know his faith wasn't shaken in the wide receiver even after Moncrief's forgettable debut during a 33-3 loss to New England.

Ten times Roethlisberger looked Moncrief's way. Three passes sailed out of Moncrief's reach. Four more found their way into Moncrief's hands only to fall away incomplete. One he simply dropped. Three others dropped to the turf thanks to impeccable timing by New England's defensive backs. Moncrief did manage to hold on to three passes, but he did little with them, finishing with 7 yards total.

Not exactly the performance Moncrief had in mind when he signed a two-year deal in March to join the Steelers less than a week after Antonio Brown's high-profile departure.

Known for his ability to stretch the field during stints in Indianapolis and Jacksonville, Moncrief couldn't create any separation against New England's press coverage. Every time Roethlisberger looked Moncrief's way, the Patriots pounced.

Moncrief walked off the field in a bit of a daze after what he described as the worst game of his career. Roethlisberger, however, offered a welcome postgame text of encouragement.

"He believes in me and I believe in myself," Moncrief said. "I had some drops I shouldn't have had. I know I can't make those. I've got to get better with that."

If the Steelers (0-1) want to bounce back in Week 2 against Seattle (1-0), Moncrief and the rest of the offense don't have much choice. So Moncrief buried himself in the game film, a necessary thing to help diagnose how — and more importantly why — things spiraled out of control so quickly. It wasn't fun. A pit grew in Moncrief's stomach while he rehashed the mistakes over and over again. It stuck with him when he went to sleep on Monday night. By Wednesday, however, it was gone.

So it means extra work on the JUGS machine, a not-always fun proposition considering the middle finger on his left hand is still a bit achy after he dislocated it during training camp. Yet Moncrief didn't offer it as an excuse. He's paid to catch the ball, something he needs to do far better than he did against the defending Super Bowl champions.

"You've got to tough out the pain and go," Moncrief said.

Besides, Roethlisberger is quick to point out Moncrief is hardly the only player on offense who endured a bumpy night in another "Groundhog Day"-like loss in New England.

Roethlisberger and Moncrief's missed connections against the Patriots were simply symptomatic of another frustrating 60 minutes in a stadium where the Steelers have never beaten Tom Brady. If Roethlisberger felt the issues when looking Moncrief's way were effort-related, it'd be a problem. That wasn't the case.

"He is a guy who is going to give you everything he has got," Roethlisberger said. "He is a veteran guy. He has been around. He can run. He can run different routes, not just a deep ball guy. I really like the personality he has. He is easy to talk to and will communicate back with you. I am excited for him this week. I think we will see some big things. I am not discouraged at all. I am not going to shy away from him."

Roethlisberger declined to point fingers in any particular direction, instead placing a significant portion of the blame on his 37-year-old shoulders. He did little in the first half as Patriots built a 20-0 lead and failed to get the Steelers into the end zone in the opener for the first time since 2001.

Yet well into the second decade of his career, he's also been around long enough to know as painful as it felt, getting rolled again in New England counts as just one loss.

"We all need to, starting with myself, play better," Roethlisberger said. "It's nothing drastic. Little things here and little things there."

Roethlisberger spoke calmly as he talked, buoyed by confidence in his group and a bit of history. The Steelers have lost nine games by at least 20 points during his long tenure. Pittsburgh is 8-1 the following week.

"To me, it doesn't matter who (the opponent) is, I am going into this acting like nothing happened in the past," he said.

NOTES: S Sean Davis (ankle) practiced on Wednesday and should play against Seattle after sitting out the opener.