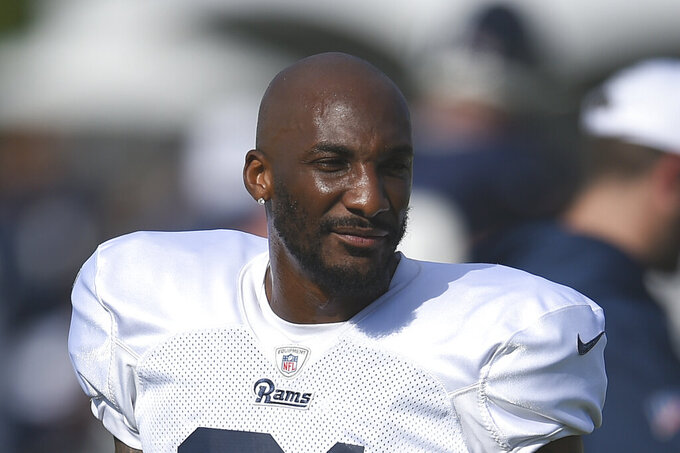 FILE - In this July 30, 2019, file photo, Los Angeles Rams cornerback Aqib Talib is shown during NFL football training camp in Irvine, Calif. With less than two months before its first regular season game, Prime Video’s crew for “Thursday Night Football” is nearly set. Kaylee Hartung has been hired by Amazon as the sideline reporter while Andrew Whitworth and Aqib Talib have signed on as contributors for pregame, halftime and postgame coverage.(AP Photo/Kelvin Kuo, File)

Kaylee Hartung has been hired by Amazon as the sideline reporter while Andrew Whitworth and Aqib Talib have signed on as contributors for pregame, halftime and postgame coverage.

Prime Video's regular-season debut as the exclusive home of the primetime package comes on Sept. 15 when Kansas City hosts the Los Angeles Chargers.

“It has been an amazing opportunity to start from scratch, to really bring some new perspective," said Marie Donoghue, Amazon’s vice president of Global Sports Video. "We’ve got great veterans who are at the top of their profession while at the same time, bringing incredible personalities who have recently left the game. So that’ll bring unique current input.”

Hartung returns to sports after five years with ABC News and CNN. She previously was a sideline reporter for ESPN, primarily for SEC football and college basketball.

In a phone interview, Hartung said she didn't leave sports five years ago, but moved on to become a more versatile reporter.

“The range of opportunities has been cool, and I think it just helped better prepare me for this next step,” she said. “This is the next great opportunity for me to tell great stories. The storytelling, whether it’s news or sports, it’s the same craft. And that’s what has been so exciting about this opportunity, because it is the biggest story in sports, and we’re talking about the NFL and a primetime game that’s going to have so many eyes on it.”

Hartung will be paired with play-by-play announcer Al Michaels and analyst Kirk Herbstreit for the game coverage. Hartung and Herbstreit did a few events together for ESPN, but were never part of the same weekly crew until now on Prime Video.

While Herbstreit will continue with college football for ESPN, Hartung's final day at ABC News was last Friday.

“I’ve heard the excitement from both of them about being a part of building something new. And I think for us, to get to do that together will be a bonding experience, for sure,” said Hartung of Michaels and Herbstreit. “Just getting to learn from them, the ways in which they go about doing their jobs and handling their business, it’s an incredible learning opportunity for me.”

Whitworth, who capped a 16-year NFL career by helping to lead the Los Angeles Rams to a Super Bowl championship, joins Ryan Fitzpatrick and Richard Sherman as part of a studio crew who played last season. The former offensive tackle and Walter Payton NFL Man of the Year recipient received plenty of interest from networks before deciding on Prime Video.

“I was really excited when I got a chance to kind of get a little bit of a vision of what they want to do — to be a little innovative and change it up and create a new and exciting experience. It was right there with who I am in creating a culture and an atmosphere and really an experience,” Whitworth said.

Talib played 12 years in the NFL — including winning a Super Bowl title with Denver — before retiring after the 2019 season. He had done some NFL games for Fox the past two seasons.

It was announced earlier that Charissa Thompson and Tony Gonzalez also will be on pregame, halftime and postgame coverage.

Donoghue said plans are still being finalized for some of the alternative feeds that will be available during the games. Prime Video will have a few practice games before carrying the preseason game between the San Francisco 49ers and Houston Texans on Aug. 25.