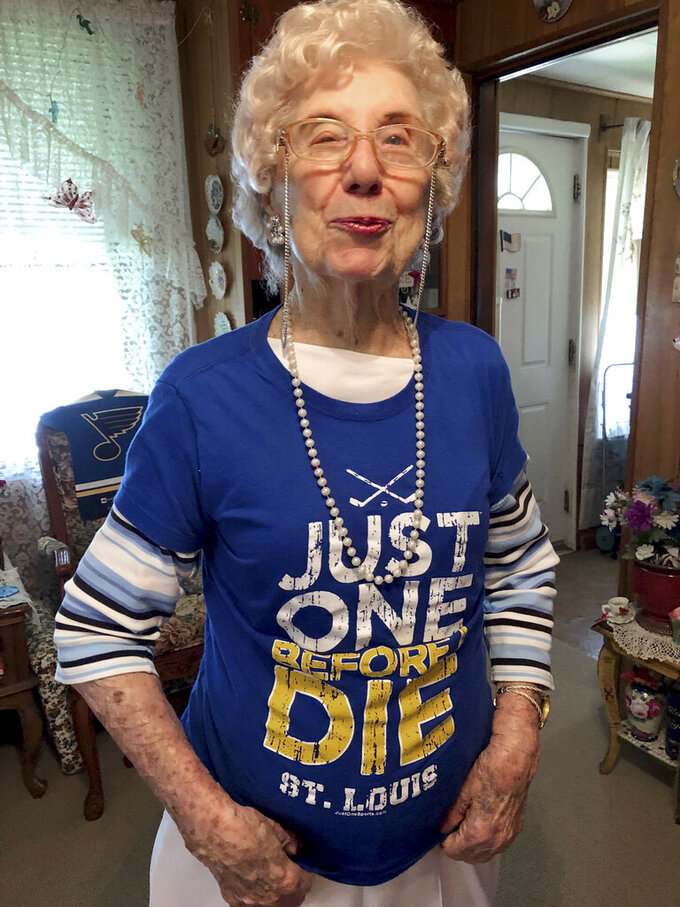 St. Louis Blues fan Marge Kirchhoefer poses for a portrait in her St. Louis home, Thursday, June 13, 2019. At age 100, Kirchhoefer is among the oldest St. Louis Blues fans, and now that they're Stanley Cup champions, she knows exactly how she'll celebrate. She plans to drink champagne and says she "may get loaded." There's a lot of that going around in St. Louis, now that the Blues have knocked off the Boston Bruins to win their first NHL championship since they arrived as an expansion team 52 years ago. (AP Photo/Jim Salter)

ST. LOUIS (AP) — At age 100, Marge Kirchhoefer is among the oldest St. Louis Blues fans and now that they are Stanley Cup champions, she knows exactly how she will celebrate.

"It's too good to be true," Kirchhoefer said. "I have friends and we all party together. We're going to drink champagne. I may get loaded! I don't care."

There's a lot of that going around in St. Louis, now that the Blues have knocked off the Boston Bruins to win their first NHL championship since they arrived as an expansion team 52 years ago. The 4-1 win in Game 7 on Wednesday night in Boston set off a wild celebration that lasted well into Thursday morning.

And why not? After all, it's been a long wait for Blues fans and a difficult few years for St. Louis sports enthusiasts in general.

Until this year, the Blues had never won a game in the Stanley Cup Final. They had not even reached the final since 1970, the last in a three-year championship series run that ended with the still-new Blues a lowly 0-12 — swept twice by Montreal and then once by the Bruins.

Since those long-ago days, St. Louis lost two NFL franchises — the Cardinals to Arizona in 1988, and the Rams to Los Angeles in 2016. To justify a move that appeared on the surface to violate league guidelines, an attorney for Rams owner (and Missouri native) Stan Kroenke wrote a scathing and widely disputed report that painted St. Louis as an economic hellhole for sports franchises.

St. Louis' beloved Cardinals won World Series titles in 1982, 2006 and 2011, and National League pennants in 1985, 1987, 2004 and 2013. But they've missed the playoffs three straight years and have been only so-so this season. The Cardinals find themselves in the unusual position of taking a backseat.

The Blues are the toast of the town.

A parade on Saturday will honor hockey's new champions and up to 1 million people are expected to line downtown streets, followed by a rally beneath the Gateway Arch.

Such a celebration seemed like only a pipe dream six months ago.

On Jan. 3, midway through the season, the Blues had the worst record in the NHL. Coach Mike Yeo was fired in November and things really weren't getting much better under interim coach Craig Berube.

Then a 25-year-old rookie goalie, Jordan Binnington, was called up and began to dominate. The team in front of him slowly took on the tough, hard-nosed exterior of Berube, a former NHL enforcer. The Blues not only made the playoffs but beat Winnipeg, Dallas and San Jose to earn a shot at the Cup. After missing out on a chance to clinch the championship at home Sunday, the resilient Blues won in Boston for the third time in the series.

Kirchhoefer said she sometimes watches games with her grandson's family, a home where the Blues reign so supreme that they have a goal light in the living room. When the Blues score a goal, the light goes off and a siren sounds.

"It's just like being there," Kirchhoefer said. "I get goose pimples when those games get so close. Oh my!"

Kirchhoefer, who worked as a petroleum company office manager before retiring in 1984, used to attend games with her late husband, Frank, who died in 2002. Her love of the team grew watching the enthusiasm of her grandson, who hunts for arrowheads and sells them to pay for tickets.

"This is once in a lifetime," Kirchhoefer said. "They (the Blues) tried so hard, from being way on the bottom and coming up like that. It was wonderful."