Injuries becoming a tough foe for Jets amid surprising start 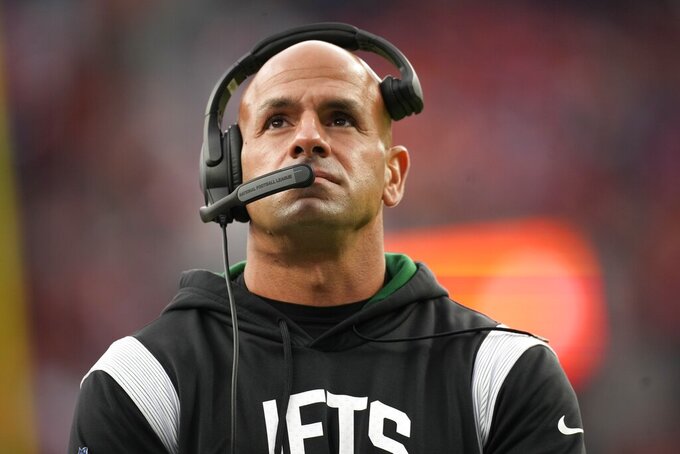 The New York Jets are off to their best start since 2010, the most recent time they made the playoffs — a drought that is the NFL's longest.

A four-game winning streak has them feeling confident they can end that postseason dry spell. But it just got a lot tougher amid all the optimism.

Robert Saleh opened his Zoom call with reporters Monday by delivering the news rookie running back Breece Hall and versatile offensive lineman Alijah Vera-Tucker — perhaps the Jets' two best players on offense during their surprising 5-2 start — are out for the rest of the season.

Hall has a torn ACL in his left knee, while Vera-Tucker has a torn triceps. And they both came within a six-minute span in the second quarter of the Jets' 16-9 victory at Denver on Sunday.

The New York Jets moved quickly to replace Hall. They traded a conditional late-round draft pick to Jacksonville on Monday night for running back James Robinson, according to a person familiar with the deal. The person spoke to The Associated Press on condition of anonymity because the trade had not been formally finalized.

Hall, a second-rounder from Iowa State, had quickly emerged as a playmaker capable of scoring at any time. Just as he did on his 62-yard touchdown when he hit a top speed of 21.87 mph according to Next Gen Stats, the fastest by a ball carrier this season.

Zach Wilson and the offense will now turn to Michael Carter, who led the team in rushing as a rookie last season. He had lately been more of a complementary back to Hall.

“I prepare all the time like I’m the only back on the team, and understand I’m not,” Carter said. “I prepare myself for games like that, but my preparation is not going to change."

Vera-Tucker earned high praise and respect from his teammates and opponents for being able to play multiple spots on the offensive line while filling in for injured players and performing at a high level. He was the starting right tackle the last three games after previously starting at left tackle and right guard this season, and at left guard as a rookie.

Cedric Ogbuehi, a first-round pick of the Bengals in 2015, will take Vera-Tucker's place at right tackle.

Once Vera-Tucker is placed on injured reserve, the Jets will have four offensive tackles on injured reserve, including George Fant — who's eligible to return this week, but Saleh said he likely won't — rookie Max Mitchell and Mekhi Becton. That doesn't include Duane Brown, who's back after missing the first four games with a shoulder injury.

“Definitely not ideal,” center Connor McGovern said. "But there’s not a lot we can do about it. You've got to just kind of take what’s given to you and make the most of it. We've been winning football games and rolling with punches as best we can.”

That remains the focus, even as backups to the backups have to step in.

“Nobody in our locker room will look at each other and say, ‘We just got worse because we've got to go with this guy.’” Saleh said. “I promise you the person who is stepping up isn’t thinking that and I promise you we’re not thinking that, either. It’s a great opportunity for somebody else to step up and put their name out in the open.”

New York's secondary has been terrific the past few games, led by cornerbacks Sauce Gardner and D.J. Reed. Gardner was tested a few times in Denver, including when he broke up Brett Rypien’s fourth-down pass into the end zone to Courtland Sutton. Gardner and Reed each finished with three passes defensed. Gardner's 10 tackles were the most in his rookie season, while Reed had a season-best eight tackles. On third down this season, Gardner and Reed have combined for four passes defensed, an interception and nine tackles.

Third down continues to be a major problem for the offense. The Jets went 3 for 14 in those situations at Denver, a week after going 1 for 11 at Green Bay. For the season, New York has converted just 32.7% of third-down situations — 29th in the NFL.

Greg Zuerlein. The veteran kicker has been reliable since a shaky Week 1 performance during which he missed a field goal and extra point. Zuerlein wasn't affected by windy conditions at high altitude in Denver, kicking field goals of 45, 33 and 40 yards. For the season, he's 13 of 15 on field goals and 16 of 17 on extra points.

Brown. The veteran left tackle is playing through a shoulder injury, but had a rough game on a day when the offensive line struggled as a whole. Brown was called for three penalties, including a false start and a holding call during the Jets' final series before halftime when they settled for a field goal.

In addition to Hall and Vera-Tucker being out for the season, WR Corey Davis is day to day with a knee injury that forced him out Sunday.

0 — Wilson has no touchdown passes in the Jets' past three games. It's a statistical oddity that highlights how reliant on the run New York has been. The Jets have rushed for eight TDs during that span.

The Jets look for their first five-game winning streak since 2015 when they take on the AFC-rival New England Patriots, against whom they have lost 12 straight.