Jags turn to QB Glennon against Browns after Luton's debacle 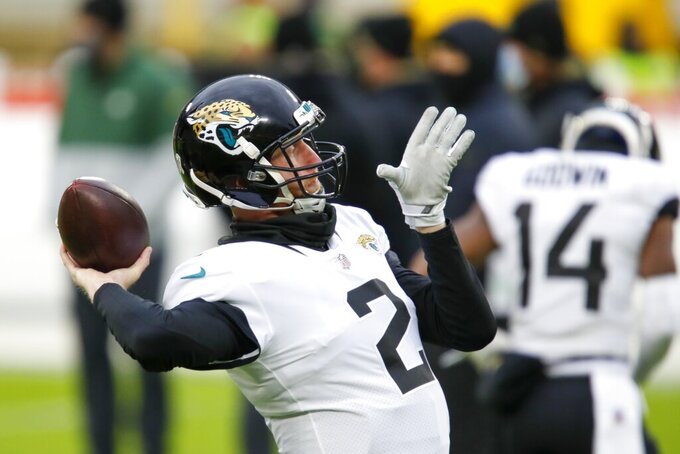 Try to follow along: Glennon got benched in 2017 for then-Chicago rookie Mitchell Trubisky, who got benched this season for Nick Foles, who got benched last year in Jacksonville for rookie Gardner Minshew, who got replaced this month by rookie Jake Luton, who is now benched in favor of Glennon. Whew!

Jaguars coach Doug Marrone picked made Glennon his starter for Sunday's game against Cleveland (7-3) three days after he considered pulling Luton during a 27-3 loss to unbeaten Pittsburgh. Luton completed 16 of 37 passes for 151 yards and four interceptions against the Steelers.

“I think he gives us the best chance to win,” Marrone said of Glennon. "Mike’s experienced and that’s why we brought him in here, to be able to fill in whenever we need him. So he’ll get his opportunity.”

Luton went winless in three starts for Jacksonville (1-9), whose nine-game losing streak is tied for the longest in any one season in franchise history.

Glennon welcomed a chance to end the skid.

“I got nothing to lose," he said. "I haven’t been the starter in three years. I don’t know when this opportunity is going to come again. I’m just going to go out there, have fun, let it rip and see what happens.

Luton replaced Gardner Minshew (thumb) during the team’s bye week and has completed 54.5% of his passes for 624 yards, with two touchdowns and six interceptions. He also was sacked seven times. His inexperience showed in all three outings, first failing down the stretch in close games against Houston and Green Bay, then looking mostly lost against the blitzing Steelers.

“I told Jake that: ‘Hey, we really appreciate everything. We really like a lot of things that you’re doing, but we’re just going to take a step back and just kind of digest things for a while,'” Marrone said. “He’s fine and I think he’s got a chance to become a good football player in this league.”

Minshew resumed throwing last week, but Marrone hasn't seen enough to believe Minshew is ready to return. He could end up serving as Glennon's backup Sunday.

Either way, Jacksonville will have three different starting quarterbacks for the first time since 2010, when Trent Edwards and Todd Bouman filled in a game each for David Garrard.

The 30-year-old Glennon has started 22 of 29 games over seven NFL seasons with Oakland, Arizona, Chicago and Tampa Bay. He has 36 touchdowns passes and 20 interceptions. His last start came in Week 4 in 2017 with the Bears.

“I’ve been in a role the majority of my career where I’ve just been the backup, so pretty used to not getting the reps," Glennon said. "But out there today, I felt comfortable. I think I have a lot of prior experience and knowledge that has helped me grow as a player. Even though I might not have been playing, I think I know more about football than I did the last time I started. Hopefully I can apply some of that and help us win.”