Jalen Hurts back at practice for the Eagles after illness 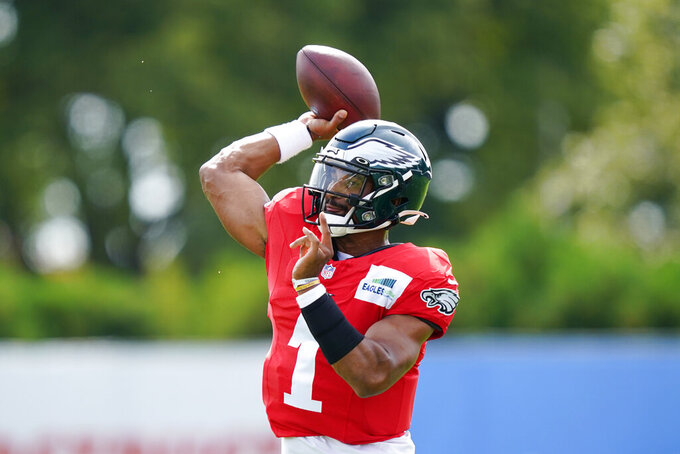 PHILADELPHIA (AP) — Jalen Hurts returned to practice Sunday, three days after the Philadelphia Eagles scratched the second-year quarterback minutes before kickoff of a preseason game against New England because of a stomach illness.

Eagles coach Nick Sirianni said that Hurts also participated in a walkthrough Saturday that was closed to the media. The team practiced indoors Sunday night after a public workout at Lincoln Financial Field was canceled because of rain.

Hurts went to the hospital and was checked for abdominal pain before being released Thursday night.

Sirianni said Hurts has been “just resting his body, as you would with any illness, and getting himself back. Recovering his body, and obviously was out there slinging it around today at practice.”

The Eagles head up the New Jersey Turnpike this week for two joint practices with the New York Jets ahead of the preseason finale Friday night. Sirianni hasn’t decided whether Hurts or other starters will play. The Eagles have a 16-day gap between the final preseason game and their regular-season opener at Atlanta on Sept. 12.

“That’s going to be something that we evaluate every day,” Sirianni said. “We got a great practice today, a very high energy, competitive practice today in our indoor facility. ... We’re going to get two really good practices against the Jets. So that’s just something that we’re going to continue to evaluate. ... We’re gonna see how the work goes against the Jets and make a decision after that.”

Hurts was not available to speak to reporters.

Sirianni reiterated how pleased he was with last week’s joint practices against the Patriots, in which many observers felt the Eagles had the upper hand. It went the opposite way in the game as New England routed Philadelphia 35-0. The Patriots used more starters than the Eagles, but they dominated start to finish.

The Eagles (0-2) have converted only two of 18 third downs in the preseason.

“When we get into game planning a little bit more for the season games, we’ll get our guys in better positions, attacking the coverages that we want to attack,” Sirianni said. “We also know that we’re not good at it right now, right? We’re going out there with our base calls against probably the team we’re playing base calls. .... We’re not winning. That’s as simple as that. ... We’re just trying to put an extra emphasis on it.”

“I feel like we went harder that first day. We had more reps than we’ve seen in training camp this year,” Eagles defensive end Brandon Graham said. “Those days, I not gonna lie, after that first day was over, I was getting’ ready to go to sleep, because we was that wore out. And that’s how it was; the intensity was high. So I think they’re very valuable.”

NOTES: LT Andre Dillard returned to practice Sunday on a limited basis after being sidelined by a knee injury. ... Rookie WR DeVonta Smith, just back from a knee injury, went to the sideline briefly but worked out the problem and returned to practice, seemingly at full speed ... RB Miles Sanders said he finally met former Eagles star Brian Westbrook at a charity event Saturday. Westbrook is one of the NFL’s all-time best receivers from the running back position; Sanders was a smooth receiver as a rookie but struggled with catching the ball last season. Sanders said Westbrook told him that “it’s all about confidence. … Just stay confident, and know what I can do in the passing game.” … S Anthony Harris, asked to name a teammate who might be ready for a breakout season, went with Alex Singleton, who has been the team’s best linebacker this summer, despite getting a late start on camp after a COVID-19 quarantine.