Jets' Darnold out with shoulder, Flacco to start vs. Cards 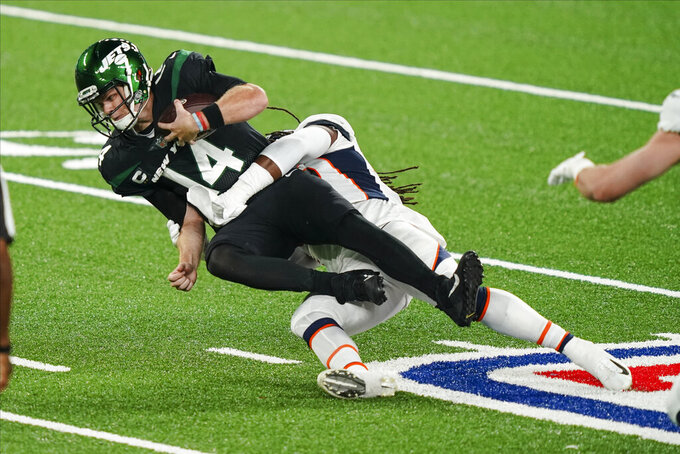 NEW YORK (AP) — Sam Darnold was hoping the doctors would say something different. Instead, the New York Jets quarterback got the news he was dreading.

Darnold will sit out against the Arizona Cardinals on Sunday with his sprained right shoulder.

“They thought it was in my best interest not to play,” Darnold said.

Coach Adam Gase said Wednesday that veteran Joe Flacco will get the start at home in Darnold's place.

“We're just making sure we do the right thing, not only by him, but for the immediate future and long term,” Gase said of Darnold.

Darnold, who was injured last Thursday night against Denver, is week to week. The team will see how the quarterback feels after he rests this week.

“Hopefully he gets better quickly and he doesn’t miss too much time,” Gase said.

The coach wouldn't go into detail as to how severe the sprain is or whether it's a first-degree injury or worse.

“I know he’s in a lot of pain,” Gase said. “That’s what it is, he can raise his arm a certain degree, but to go out and practice, it would be very difficult for him right now.”

It marks the third straight year in Darnold's young NFL career that he will miss at least a game. He was sidelined for three games as a rookie with a sprained foot and then three more last year while dealing with mononucleosis.

“It’s not fun being hurt,” Darnold said. “All I want to do is go out there and play football with the guys, so again, not fun but definitely got to have a good mindset going into treatment and rehab, trying to get healthy and staying on top of it as much as I can.”

Darnold sprained the AC joint in his throwing shoulder when he was sacked late in the first quarter by Denver’s Alexander Johnson. He stayed in for one more play and handed the ball off before heading to the locker room to be examined. Darnold appeared to have avoided serious injury when he came back into the game during the Jets’ next offensive series.

Gase said he and the team aren't second-guessing the decision to have Darnold return since he's now going to miss at least one game.

“At that time, the guys thought that was the right thing to do,” Gase said. “He wanted to go back in and knew what it was. Obviously, after the game, the next game, he was a lot more sore than he was in real time. They weren't worried about further damage. It would be hard for him to go practice this week.”

Darnold said Monday his shoulder seemed to be improving, but knew it would be up to doctors as to whether he'd be able to practice and ultimately play.

Instead, the 35-year-old Flacco will make his first start since Week 8 of last season with Denver. He injured his neck in that game, a loss to Indianapolis, and had surgery on a herniated disk in April.

Flacco signed a one-year deal with the Jets in May and spent all of training camp on the physically unable to perform list. He was inactive the first three games, but was Darnold's backup against the Broncos — and completed two passes for 16 yards in his eight snaps before Darnold returned.

“It was a little bit weird last week, you know, because you’re always ready for that, but you don’t necessarily expect anything like that to happen so my adrenaline was definitely pumping last week,” Flacco said. “When Sam went down there for a few plays, I had to go in, but this week feels a lot more normal today and that probably is to my advantage a little bit, I guess.”

Gase doesn't anticipate the offense needing to change much with the switch at quarterback.

“Those guys have similar arm strength and all those types of things,” Gase said. “Those guys can make all the same throws.”

In other injuries, running back Le’Veon Bell (hamstring), LB Blake Cashman (groin), WR Vyncint Smith (core muscle) and DE Jabari Zuniga (quadriceps) have all been designated to return to practice from IR.