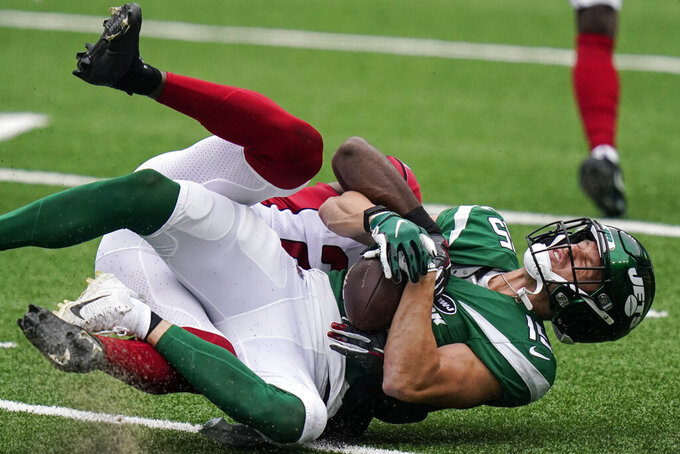 NEW YORK (AP) — Adam Gase might be ready to call an audible on play-calling duties.

With the New York Jets off to an 0-5 start for the first time since 1996 and struggling mightily on offense, the coach acknowledged Monday he is considering handing off calling plays during games so he can take a wider-angle view of the entire team.

“I don’t think I’m ever opposed to trying something to change things up,” Gase said during a conference call. “I’d say everything’s on the table at this point.”

Gase said he has called the offensive plays during every game he has been a head coach, including his three seasons in Miami, but acknowledged he has “toyed with the idea” at times. While he wouldn't commit to relinquishing those duties this week, it sounded as though more input from offensive coordinator Dowell Loggains and/or running backs coach Jim Bob Cooter is possible.

“I'm considering everything,” Gase said. “I'm just looking at everything and just trying to figure out whatever can help us turn this thing in the right direction, I'll be all for it.”

The Jets rank last or close to last in nearly every major offensive category. They have dealt with several injuries, including quarterback Sam Darnold missing a game with a sprained right shoulder, and a handful of wide receivers sidelined during the first five games.

Running back Le'Veon Bell (hamstring) returned Sunday after missing three games, but had little impact in the 30-10 loss to Arizona. He ran for 60 yards on 13 carries and had a 7-yard catch on the only pass that came his way.

Bell raised some eyebrows after the game when he “liked” a few social media posts that questioned why he wasn't used more in the passing game — and one that suggested the Jets trade him. Bell didn't speak to reporters after the game or on Monday.

Gase said he hadn’t yet spoken to Bell about the situation, but understands the running back’s frustration over the team not winning.

“I hate that’s the route that we go with all this instead of just talking to me about it, but that seems to be the way guys want to do it nowadays," Gase said of players using social media.

The best player on the field has been wide receiver Jamison Crowder, despite his missing two games with a hamstring injury.

Whether it has been Darnold or Joe Flacco under center, Crowder has been consistently reliable. He has three straight games with 100 or more yards receiving and leads the Jets with 22 catches. The next closest players in receptions are Chris Hogan (14 receptions) and Chris Herndon (13) — and they've played in all five games.

Well, the list could go on and on. But the inability to score touchdowns in the red zone has been critical.

New York has had its chances this season, but is a league-worst 25% (3 of 12) inside the opponents' 20-yard line. The Jets went 1 for 3 Sunday, Flacco connecting with Crowder on an 11-yard touchdown.

“With a team like us that’s struggling right now to get going it’s, in a way, good to see those long drives and keeping ourselves on the field and converting first downs,” Flacco said. “But at the same time, we just haven’t been able to get out of our own way.”

John Franklin-Myers. The defensive end had the Jets' only sack against Arizona and has been emerging as a bright spot in limited snaps. As a rookie with the Rams, Franklin-Myers had a sack and a forced fumble in the Super Bowl against New England in February 2019. He was claimed by the Jets off waivers last year, but spent the season on injured reserve.

Henry Anderson. The veteran defensive end had a career-high seven sacks in his first season with the Jets under Todd Bowles in 2018, He has one in the two years since while playing in Gregg Williams' defense. He played only 17 snaps on defense against Arizona and is seeing diminished playing time.

Darnold's availability is uncertain for this week, with the team wanting to see how he feels before determining if he will throw in practice Wednesday. ... Gase also had no update on top draftee LT Mekhi Becton (shoulder), who missed the game against Arizona. ... Hogan has a high-ankle sprain and was undergoing additional tests, but it sounded as though he will be sidelined at least this week.

34.8% — That's the Jets' third-down efficiency, converting 24 times in 69 opportunities — including just 4 of 13 against Arizona. New York ranks 28th in the NFL and it's a major reason for the offense being unable to consistently sustain drives.

The NFL shuffled the schedule because of coronavirus outbreaks with Tennessee and New England, so the Jets will head to AFC East-rival Miami next Sunday instead of Los Angeles to face the Chargers. Rather than face a rookie quarterback in Justin Herbert, New York will take on a familiar face in veteran Ryan Fitzpatrick, who led the Dolphins to a stunning 43-17 win at San Francisco. The 37-year-old Fitzpatrick spent two years as Jets starter and could be in for another big day against a leaky New York defense.