Jets' Hines Ward finds himself in 'strange' spot vs Steelers 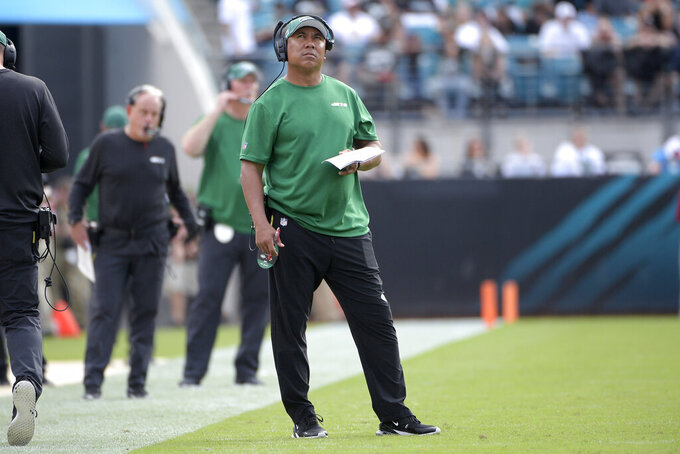 FILE - In this Oct. 27, 2019, file photo, New York Jets offensive assistant coach Hines Ward watches from the sideline during the second half of an NFL football game against the Jacksonville Jaguars in Jacksonville, Fla. Ward has been a popular guy this week — and he has the voicemails, texts and emails to prove it. The Steelers are coming to town and the former Pittsburgh wide receiver has been hearing from friends and former colleagues who hope to catch up with the Jets' offensive assistant coach. (AP Photo/Phelan M. Ebenhack, File)

FLORHAM PARK, N.J. (AP) — Hines Ward has been a popular guy this week — and he has the countless voicemails, texts and emails to prove it.

The Steelers are coming to town and the former Pittsburgh star wide receiver has been hearing from friends and former colleagues who hope to catch up with the New York Jets' offensive assistant coach.

“Yeah, I’ve got a lot of tickets," Ward said Friday with a big smile. “My phone’s been blowing up. Just the whole organization. It’s kind of weird. I played my entire career there, so they want to go out to dinner and things like that. It is Christmas weekend, New York City, so everyone wants to come in.

“It will be special for me."

And he'd like nothing more than to cap it with a victory over his former team.

“I am a competitive guy,” Ward said. “I want to win. I want to beat the Steelers just as much as anybody in this building. Trust me. I'm telling my guys they've got to win this one for me. I want the Gatorade shower and all that if we win.

“I’m just thrilled about the opportunity that it’ll be the first time in my career I ever rooted against the Steelers."

Ward caught 1,000 passes for 12,083 yards and 85 touchdowns — all franchise records — over 14 seasons in Pittsburgh. He helped the Steelers win two Super Bowls, and was the game's MVP in 2006 when they beat the Seattle Seahawks.

He was a reliable wide receiver and one of the most physical the game has seen. That made him an easy fan favorite, and his black-and-gold No. 86 is still worn by fans in the stands at Heinz Field.

But just like former Steelers running back Le'Veon Bell, who's now with the Jets, Ward will be the enemy to the visiting Pittsburgh fans at MetLife Stadium.

“Yeah, it will be a little strange for me," the 43-year-old Ward acknowledged. “I’m super excited about the opportunity, dressed up in green and knowing how Steeler Nation is going to be out there. But I’m still a competitive guy. I want to do all that I can to prepare our guys to go out there and try to win games. At the end of the day, that’s really what it’s all about."

Ward retired after the 2011 season and dabbled in television. He appeared on the ABC reality competition “Dancing with the Stars” — and foxtrotted and cha-cha-cha'd all the way to the title. Ward also competed in the 2013 Ironman World Championships.

But football still tugged at his heart.

He found his way back to the NFL in 2017 when he worked as a coaching intern for the Steelers during training camp. Ward got involved in the now-defunct Alliance of American Football last winter as the league's executive of player relations.

He served as a coaching intern again this summer for the Jets after general manager Joe Douglas reached out to the former wide receiver.

Several of New York's receivers raved about Ward, including Robby Anderson, and were excited about learning from the four-time Pro Bowl selection. Coach Adam Gase was so impressed, he asked Ward to stay on staff during the regular season as a full-time assistant working alongside wide receivers coach Shawn Jefferson.

“There’s nothing like being around a locker room and being around an organization," Ward said. “For me, I’ve been to the pinnacle. I’ve been to the mountaintop. I’ve been very blessed. I’ve gotten everything I’ve wanted out of football, so I want to share that experience, that knowledge with the younger guys. It’s really all about helping guys and that’s the whole reason I wanted to get into coaching.

“Luckily for me, the Jets gave me an opportunity here and I’m taking full advantage of it each and every day."

Anderson, in particular, seems to have benefited greatly from Ward's presence. The Jets' No. 1 wide receiver has always been a deep threat in the passing game, but has been criticized for not being physical.

Over the last month, Anderson has improved greatly in that area, routinely coming down with tough, contested grabs. He is also taking on defenders during plays, and that's something Ward can particularly appreciate.

“I get super excited watching Robby out there blocking," Ward said. “It’s the little things as far as doing the extra stuff to help our team win games. I get fired up about that."

Ward is also high on quarterback Sam Darnold, who reminds him of a certain Steelers star who used to throw him passes.

“You know, Sam reminds me a lot of Ben Roethlisberger," Ward said. “When I first came into the league, we had a young kid coming in full of talent. You just want to see (Darnold's) progression grow as a quarterback, and he's done that. From Week 1 to where he is now, you see tons of improvement. The potential’s there. ...

Ward is uncertain whether he'll remain on the Jets' staff beyond this season or end up elsewhere — or if he'll even continue coaching.

He's taking the same approach as he did as a player: focusing on the next game.

Even if this one just happens to be a little bit more special.

“I’ve learned a lot, going through a lot of ups and downs this season," Ward said. “I’ve learned how to deal with guys and stuff like that. But, all in all, I wouldn’t change it for the world. It’s been an amazing experience for me."