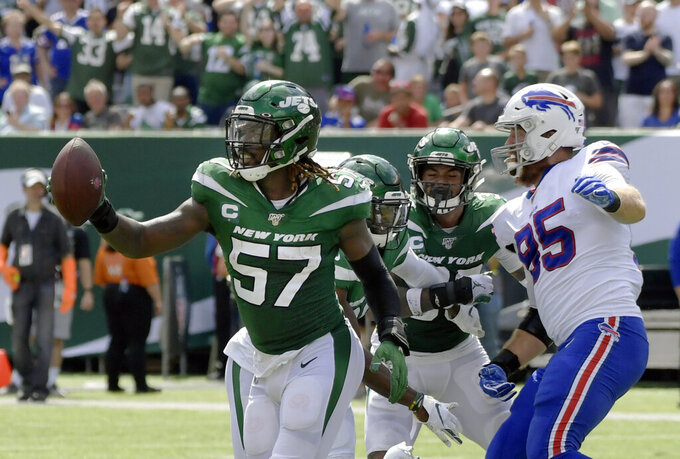 FILE - In this Sunday, Sept. 8, 2019 file photo, New York Jets inside linebacker C.J. Mosley (57) celebrates after recovering a fumble during the first half of an NFL football game against the Buffalo Bills in East Rutherford, N.J. C.J. Mosley has been waiting a long time to feel this way again. After what he called a “two-year hiatus” — one because of an injury, the other after opting out because of the coronavirus pandemic — the New York Jets middle linebacker is on the football field again and ready to show he can still be a game-wrecking playmaker. (AP Photo/Bill Kostroun)

After what he called a “two-year hiatus” — one because of an injury, the other after opting out because of the coronavirus pandemic — the New York Jets middle linebacker is on the football field again and ready to show he can still be a game-wrecking playmaker.

“When you’re out for a while, you always get in your head like, ‘When I get back, how’s it going to feel? Am I going to be able to move like I used to?’" Mosley said Thursday. “After finishing this week, I feel great.”

Since signing a five-year, $85 million deal — the richest for an inside linebacker — with the Jets in March 2019, Mosley has played in just two games. And neither was for a full four quarters. A four-time Pro Bowl selection in five years with Baltimore, Mosley recognizes there are many who doubt he'll be able to make the type of impact New York expected when it doled out that big money.

“There’s a little added chip because you’ve always got your fans that are going to heckle,” Mosley said. “When I get back on the field, I definitely want to make sure they're respecting the name again. You want your players to play and, unfortunately, I haven’t been able to. They have the right to do that, so I've got to just make sure I do my job."

Mosley's debut with the Jets came in the season opener in 2019, when he had six tackles, returned an interception for a touchdown and recovered a fumble against Buffalo. Then, he injured his groin while breaking up a pass in the end zone at the end of the third quarter. New York's defense fell apart after he left, and the Jets lost 17-16.

The linebacker missed the next four games before returning for a Monday night game against AFC East-rival New England. Mosley re-injured the groin and missed the rest of the season, eventually having core muscle surgery followed by intense rehabilitation.

Mosley was feeling healthy again last offseason and appeared on track to reclaim his spot as New York's middle linebacker and quarterback of the defense.

But then the pandemic hit.

“With the injury from 2019, just that mental and emotional grind of trying to get back on the field," he said, “and then I get hurt again and then COVID happens, it was like, damn, what’s going on?”

He made the difficult decision just before training camp to be one of the nearly 70 NFL players to opt out for the season. Mosley said he consulted with various people, including family members, coaches and even the team psychologist.

“It was just more of a family decision,” Mosley said without going into specific details. “At the end of the day, it was my decision as well. So I just thought it was the best thing for me to do.”

His absence was felt on the defense, which struggled along with the rest of the team as the Jets limped to a 2-14 record that ultimately got coach Adam Gase and his staff fired. Meanwhile, Mosley watched from his home in Alabama, unable to help his teammates.

“That was my first time not playing football since I was 5 years old,” Mosley said. “That was the biggest difference. When your team’s losing and you can’t play — whether you opt out or you’re injured — it’s just frustrating because you want to be on the field to help. Whether I would have been there and we won one game or not, or won more games, you just want to be with the team. I think that was the toughest part.”

Mosley, who turns 29 next month, came up in trade rumors early in the offseason, but his contract made him difficult to deal — even if the Jets wanted to do so. New York's signing of former Detroit inside linebacker Jarrad Davis also appeared to cloud Mosley's future with the team.

Instead, he's expected to man the middle of new coach Robert Saleh's 4-3 base defense. And Saleh has liked what he has seen from Mosley so far.

“He looks good,” Saleh said. “He’s a very powerful mover. Obviously, we can’t see tackling, but you can see a lot of power in his movement. He eats up a lot of ground. He’s fluid, he’s smart, he’s savvy, he’s a tremendous gentleman. And I'm just really excited to get a chance to work with him.”

Mosley is confident he can return to being the player he was two years ago. He has nearly 600 career tackles, 10 interceptions, 8 1/2 sacks, six forced fumbles and six fumble recoveries on a resume he expects to add plenty to over the next several seasons.

“Yeah, I don’t have any doubts in myself,” he said, mentioning how Rob Gronkowski stepped away from the game before returning and winning a Super Bowl with Tampa Bay in February.