Jets rookie QB Wilson driven to succeed by his 'process' 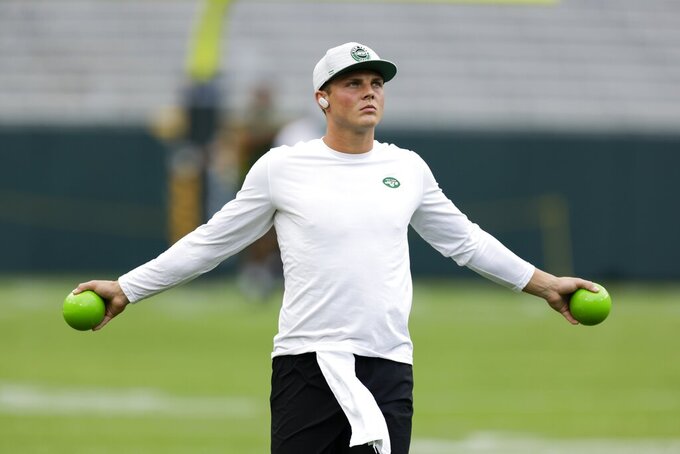 FLORHAM PARK, N.J. (AP) — Zach Wilson became a college star and top NFL prospect for all the things everyone saw each week on the field at BYU.

It was a lengthy list that seemed to grow with every performance: strong arm, wicked passing angles, a knack for turning nothing into big plays, and cool confidence.

The New York Jets rookie quarterback has impressed his new coaches and teammates with something not so visible.

“His process is light years ahead of where a normal rookie’s process will be,” coach Robert Saleh said recently.

Usually “progress” is the buzzword for rookies, especially quarterbacks, and that will come as the regular season moves along. But Wilson's “process” has been all the talk this summer, with Saleh repeatedly referring to that when discussing the No. 2 overall draft pick.

“When I talk process, I’m not necessarily talking about how he processes the game when the ball is snapped,” Saleh explained. “I’m talking about the way he goes about his day-to-day business and the way he studies tape; how he studies the night before; what he’s doing and the things he’s asking the video guys; the information he wants.”

In other words, Wilson has been a sponge — soaking up anything and everything he thinks might possibly help him.

It sounds like common sense, of course, but Saleh compared Wilson to some of the top linebackers he previously coached in other stops.

“Those guys were swimming their first year and were grabbing at things to try to figure it out,” Saleh said. “This young man has a tremendous process on how he gets to gameday.”

It's a terrific sign, but it's nothing new for Wilson.

At BYU, he would approach a game with a very specific mental plan and see how that worked. He'd tweak it the next week while trying to come up with what felt like a comfortable and, most importantly, successful routine.

“I just felt like the process of understanding how to get better is so important,” Wilson said. “It’s one of the most important things as far as just approaching every single day with the mentality of how can I fix some of the mistakes that I already made? Don’t make the same mistake twice.”

Wilson has been called a “film junkie” by Saleh and offensive coordinator Mike LaFleur, constantly reviewing plays and studying.

“I sort cut-ups into a certain way and I watch games earlier in the week,” Wilson explained. “I start to get more cut-ups in situations as the week goes on and I kind of have a process of just overloading information as the week goes.”

Wilson, almost like a film director, then takes that information he has compiled and edits it mentally.

“And at the end of the week, my process is now: How can I give myself one to two things that are going to simplify the game for me?” Wilson said. "And it’s going to tell me exactly what’s going on by one thing because you sit here and have all day to diagnose what’s going on.

“On the field, you have a couple of seconds and you don’t want to be sitting out there and overthinking anything. So, it’s like, how can I just simplify? And that’s part of my process, is taking all this information and simplifying it.”

So far, so good. Wilson was solid in two preseason contests, going 15 of 20 for 191 yards, two touchdowns, no interceptions and a 137.7 quarterback rating. He played in six series, with four resulting in scores.

Granted, those numbers were put up against mainly backups for the New York Giants and Green Bay Packers. But Wilson showed enough to give his teammates and coaches optimism about their 22-year-old quarterback's mental approach heading into the season opener at Carolina on Sept. 12.

“He looks like he's a little younger than he is, you know?” center Connor McGovern said with a smile before acknowledging he didn't know much about Wilson before he was drafted. "But he's been awesome. He has really grown. He has taken huge strides from OTAs to now and he looks like a real professional quarterback, and I'm expecting big things.

"The way he carries himself in a game is phenomenal.”

Again, that all goes back to, yep, Wilson's process.

“What we trust is that he’s going to be able to reset on Monday, go through that process that he has, and find ways to get better from the week before,” Saleh said. “That’s where we’re really, really excited about him. Sometimes the result on gameday is going to be phenomenal. Sometimes it’s going to be a big dud. But we trust that those duds are going to be fewer and further in between.”

NOTES: S Ashtyn Davis was activated from the physically unable to perform list. He was sidelined since having foot surgery following an injury late in his rookie season. ... New York made the trade for DE Shaq Lawson from Houston official after he completed testing at the team's facility. The Jets sent a sixth-round draft pick — the one they acquired from San Francisco last year for DL Jordan Willis — to the Texans and released S Bennett Jackson to make room on the roster.