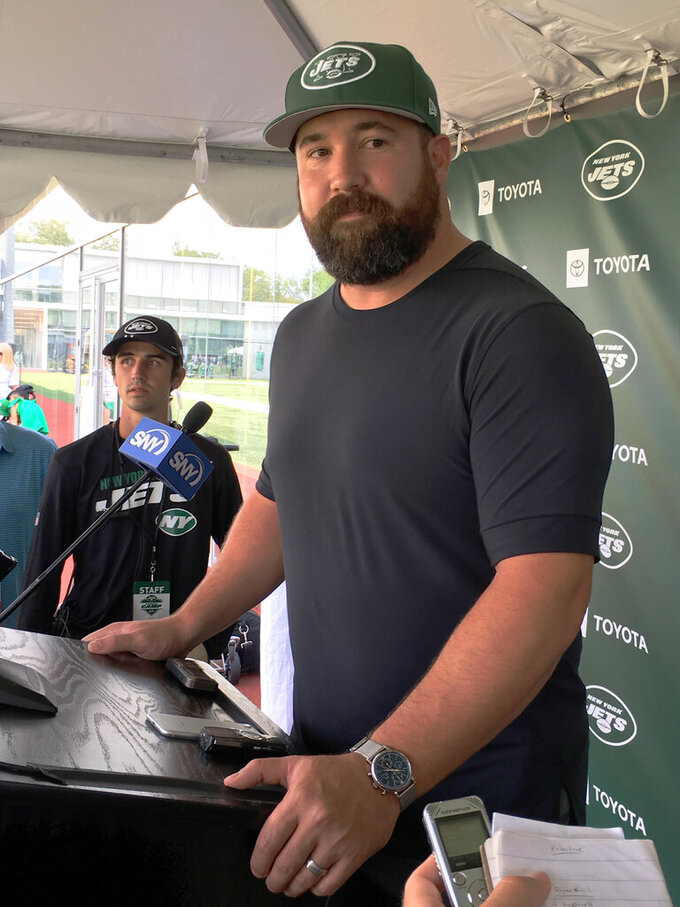 FLORHAM PARK, N.J. (AP) — Ryan Kalil thought he was done playing football. His body said so, and so did his mind.

His heart told him otherwise.

The five-time Pro Bowl center was ready for retirement. Not anymore.

Kalil signed a one-year deal with the New York Jets on Saturday, resuming a career everyone — including himself — thought was over.

"I moved back to California with my family and started living the beach life a little bit, getting ingrained back in the community where I grew up," Kalil said. "March came around and I started getting the itch again.

The 34-year-old Kalil played 12 seasons for the Carolina Panthers and was often recognized as one of the league's best at his position. He started every game last season for Carolina after playing just six in 2017 because of a neck injury.

Going into last season, Kalil announced it would be his last. It was a decision with which he was at peace, even as others wondered why he was walking away.

Former Redskins tight end Don Warren, a scout for the Panthers, sought out Kalil after Carolina's season finale at New Orleans and hugged the big lineman.

"He wouldn't let my arm go," Kalil recalled. "He was just like, 'What are you doing? Why are you not playing anymore?' So, that's been ringing in my head for a while now."

Kalil wasn't sure what to do. He started working out as if preparing for another season.

"That helped sort of get the bug back again and wanting to play," Kalil said.

But by the time Kalil committed to a return, the Panthers had already moved on by signing free agent Matt Paradis to replace him. So a sudden reunion in Carolina wasn't in the cards.

Kalil continued to train — and wait.

The opportunity came a few weeks before training camp, when new Jets general manager Joe Douglas spoke to Kalil, mostly about their thoughts on what made a winning team — Kalil with Carolina and Douglas with Baltimore and Philadelphia.

"I liked what Joe had to say," Kalil said.

The two had a few more conversations over the course of a few weeks, with Douglas gauging where Kalil's mindset was as far as playing.

On Thursday came the decision that stunned the NFL: Kalil and the Jets had agreed on a one-year deal worth $8.4 million.

"When you talk about a guy we want in this organization," Douglas said, "Ryan Kalil checks all those boxes."

Kalil flew to New Jersey, passed his physical and then officially signed Saturday.

"There's a lot of people mad at me in Carolina," Kalil said. "Rightfully so, but I love that place."

Now, though, Kalil is focused on getting ready to anchor the Jets' offensive line and build a rapport with second-year quarterback Sam Darnold — a former USC star like Kalil.

"He's a big reason for me being here," Kalil said. "I've been a fan of Sam's since watching him at SC. Sam and I know each other a little bit. We've talked in passing."

They're about to have a lot more conversations — starting now.

"I've heard how beneficial a guy like Josh (McCown) was to Sam's development last year," Douglas said. "I really think that torch can be passed to Ryan this year as far as his development."

Kalil said he weighed in at 297 pounds — 2 more than his usual playing weight. After retiring, he dropped all the way down to 260.

"I feel like I'm in great shape," he said. "Football shape, I'm going to need a little time for that."

Coach Adam Gase said he and the coaches will meet Sunday during the players' day off from practices and map out a plan for Kalil.

For now, Kalil is thrilled to be back — off his couch and on the football field.

"I'm just grateful for the opportunity to live the dream a little bit longer," he said. "I've been playing football since I was 8 years old, so you can imagine how hard it is to say you're done and walk away. I also want to apologize to anybody that I publicly or behind closed doors that I criticized for retiring and then coming back. I totally understand it now. I totally get it."

NOTES: LT Kelvin Beachum has a low ankle sprain and will be sidelined a few days. ... RB/WR Ty Montgomery (ankle) and CB Trumaine Johnson (groin) were back at practice after getting hurt Friday. ... G Tyler Jones (calf) and LB Harvey Langi (knee) left practice with injuries. ... The Jets waived TE Temuchin Hodges to make room on the roster for Kalil.