Jets' Wilson 'super anxious' to get back on field, rebound 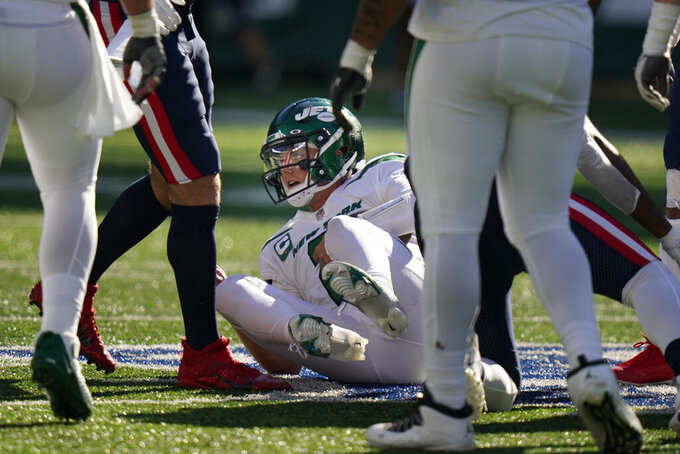 New York Jets quarterback Zach Wilson gets up after being sacked during the second half of an NFL football game against the New England Patriots, Sunday, Sept. 19, 2021, in East Rutherford, N.J. (AP Photo/Frank Franklin II)

FLORHAM PARK, N.J. (AP) — Zach Wilson flushed the worst day of his brief pro career away 24 hours after struggling through it.

He watched the film, saw what he could do better — and quickly put it all behind him.

No sense in dwelling on the four interceptions he threw in the New York Jets' 25-6 loss to the New England Patriots. The rookie quarterback has a new challenge ahead of him, and he's focused on being a lot better at Denver on Sunday against the Broncos.

“Yeah, super anxious,” Wilson said Thursday. “It's kind of like what the coaches said, just excited to move on, prepare for the next opponent, learn from all of our mistakes and how can we just apply it for this next week?”

Wilson threw interceptions on his first two passes and had three by halftime. Pick No. 4 came on the Jets' opening possession of the third quarter.

After a solid performance in the season-opening loss at Carolina during which he injured his groin, Wilson was brutally bad for most of his second NFL start. He finished 19 of 33 for 210 yards, tweaked the groin injury — and heard boos from the fans at MetLife Stadium.

“After that game, you talk to him, you just make sure he’s in a good state of mind, which he was,” offensive coordinator Mike LaFleur said. “He was obviously disappointed in himself and I was disappointed with the offense and myself, not putting those guys in a great position to be successful.”

Wilson, by the way, says his groin is “not even bothering me” and he has been a full participant at practice.

Both LaFleur and coach Robert Saleh have raved about Wilson's supreme confidence in himself — and his insatiable desire to get better. For many players, a performance such as the one Wilson had last Sunday would rock their self esteem.

That's not a concern for the coaches when it comes to Wilson.

Some proof came in Wilson's performance after that horrific start. He was just 4 of 9 for 54 yards at the time of his fourth interception. Wilson went 15 of 24 for 156 yards the rest of the way, making a few impressive throws.

“It’s how can you just hit that reset button and treat every single play like it’s a new play and not, you know, think about what had already happened up to that point?” Wilson said. "There’s going to be a lot of times where a first half doesn’t go well or whatever and you've got to finish and it’s crunch time at the end of the game and you've got to be able to pull through and just kind of forget about a lot of that stuff.

“So it’s a good learning experience for me and then the guys in that situation as well that, you know, when things aren’t going right, how can we keep pushing and compete in it all the way until the end?”

LaFleur acknowledged there's a delicate balance when working with a young quarterback, trying to make sure he doesn't forget the mistakes he made that put the team in that position while also being sure he doesn't dwell on them.

“You've got to learn from those mistakes, but in this league, you've also got to be aggressive, too,” LaFleur said. “I love what Saleh said: It’s OK to play a boring brand of football. What he meant by that is, you've got to take what the defense gives you.”

There were times against New England it was evident Wilson was trying to make something happen with a big play rather than taking what appeared to be higher-percentage smaller-yardage plays. Throughout his college career at BYU, Wilson earned a reputation as a gunslinger who wasn't shy about airing it out.

“I don’t think it’s necessarily challenging,” Wilson said. "It’s just being smart with the ball and then understanding sometimes those situations in games like that, there wasn’t check-downs on some of those interceptions. It’s not just, hey, check the ball down. It’s, hey, be smart with the ball — how can you throw it away or or get rid of it?

“And that’s what I’m applying to this next week, just trying to learn and get better.”

NOTES: WR Jamison Crowder didn't practice again while dealing with a groin injury. ... DE John Franklin-Myers (calf) was limited after sitting out Wednesday. ... LB Jamien Sherwood (ankle) was a full participant a day after being limited. He missed last week's game, but appears on track to play at Denver. ... The Jets signed S Sheldrick Redwine and FB Nick Bawden to the practice squad and placed DE Ronnie Blair on practice squad/injured. Redwine played in New York's first two games before being waived Tuesday. Bawden was a seventh-round pick of the Lions out of San Diego State in 2018.