With Joe Judge era days away, Giants pause to remember 9-11 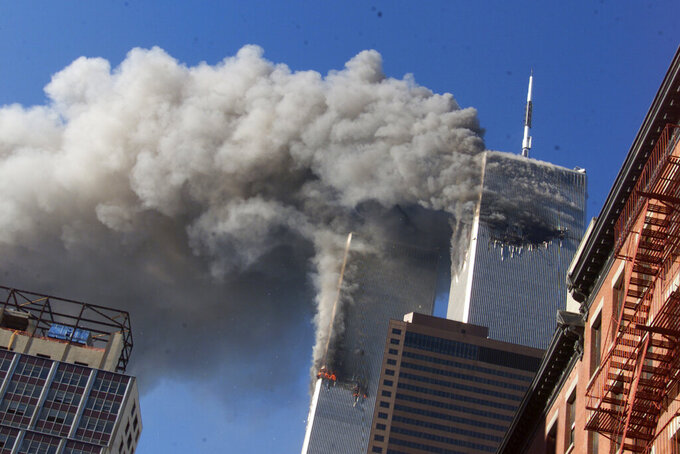 FILE - In this Sept. 11, 2001, file photo, smoke rises from the burning twin towers of the World Trade Center after hijacked planes crashed into the towers, in New York City. The coronavirus pandemic has reshaped how the U.S. is observing the anniversary of 9/11. The terror attacks' 19th anniversary will be marked Friday, Sept. 11, 2020, by dueling ceremonies at the Sept. 11 memorial plaza and a corner nearby in New York. (AP Photo/Richard Drew, File)

EAST RUTHERFORD, N.J. (AP) — With his NFL head coaching debut three days away, Joe Judge was well aware of the importance of Friday before the New York Giants headed to practice.

While it was another day to get ready to face the Pittsburgh Steelers on Monday night, Judge made sure his NYFD baseball cap was on his head.

Sept. 11 is a day of special remembrance in the New York metropolitan area and across the country.

A man who studies history, the 38-year-old Judge wasn't the only person on the team who recalled the significance of the terrible day. Safety Jabrill Peppers was 5, growing up in East Orange, New Jersey in 2001 . He remembers being in school and being let out early to go home. The memory of the smoke in the New York City skyline is still vivid.

Peppers knew people who had family members affected by the attacks.

“It was just a crazy day,” Peppers said, extending his sorrow to those impacted.

It's impossible to forget the day in this area. If a television is on, the images of the horrific events 19 years ago often are being replayed. There is also the annual reading of the names of the 2,977 people died who died in the attacks on the World Trade Center, the Pentagon, and when passengers thwarted a hijack attempt, resulting in a plane crash in Pennsylvania.

Judge spoke to the Giants about 9/11 before practice, telling them what's important is how the country responded.

“I think that’s the lesson everyone has to take with how resilient this country is," Judge said. “You look at a lot of the things going on across the country, how divided a lot of people seem. It’s amazing how much this country can truly work together and respond when needed.”

Judge said the day also makes him appreciate how people made sacrifices for others.

“There were actions taken on that day that brought this country close together,” Judge said. “I think if we can focus more on how we can respond as a nation and work together, we will get past a lot of this (divisiveness) that we are dealing with right now.”

Tight end Evan Engram started his post-practice virtual news conference by noting the importance of Sept. 11 and remembering the lives lost and the heroes who came to help. Excitement about starting a new season and thoughts on the Steelers would come later.

“I’ll forever offer and give my condolences and prayers to the families and people involved in this tragedy (19) years ago today,” he said.