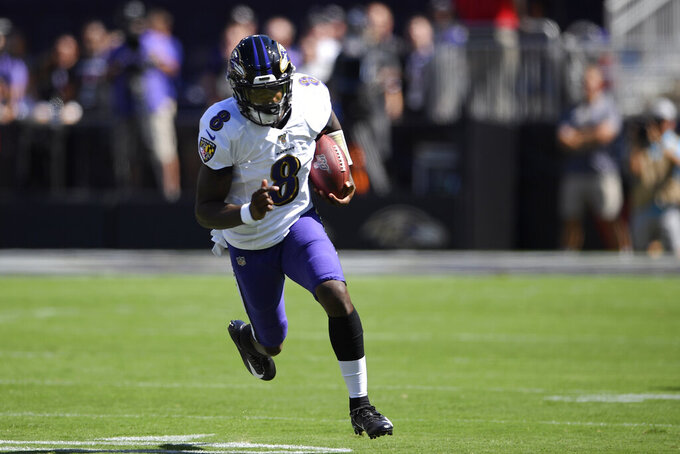 Baltimore Ravens quarterback Lamar Jackson rushes the ball in the first half of an NFL football game against the Arizona Cardinals, Sunday, Sept. 15, 2019, in Baltimore. (AP Photo/Nick Wass)

BALTIMORE (AP) — Lamar Jackson kept the Cardinals guessing all afternoon, supplementing an effective passing attack with more than an occasional jaunt out of the pocket.

Arizona never could figure out what Baltimore's multifaceted star was going to do next.

Jackson threw for 272 yards and two touchdowns, ran for 120 yards and helped the Ravens beat the Cardinals 23-17 Sunday in a showdown between two of the league's most exciting young quarterbacks.

After achieving a perfect passer rating and throwing five TD passes in a season-opening 59-10 rout of Miami, Jackson wasn't quite as sharp through the air but far more effective with his legs. He ran 16 times (including two kneel-downs at the end), juking and twisting past defenders for key gains — especially when the Cardinals were dropping back on passing situation.

"I feel it was all right. It could have been better," he said of his performance. "A lot of passes I want back. Some sacks I want back."

Arizona coach Kliff Kingsbury wondered how Jackson could possibly have been any better.

"You all watched Lamar make great throws from the pocket," Kingsbury said. "He can stand there and throw it and beat you that way, and he can beat you with his legs."

Jackson, the 2016 Heisman Trophy winner, outdid the 2018 Heisman winner, Arizona rookie quarterback Kyler Murray, who went 25 for 40 for 349 yards but fell short of carrying the Cardinals to a second straight fourth-quarter comeback.

Murray guided Arizona (0-1-1) on a four-play, 79-yard touchdown drive to make it 20-17 with 12:52 remaining. One week earlier, the former Oklahoma standout erased an 18-point deficit to salvage a tie against Detroit.

On this occasion, Jackson was just too good. He threw for 26 yards and ran for 10 in a 42-yard march that ended with a field goal for a six-point cushion, then high-stepped his way for 14 yards on a drive that enabled the Ravens (2-0) to stick Arizona on its 9-yard line with 3:48 remaining.

After the Cardinals punted, Jackson sealed the victory with a 41-yard completion to rookie Marquise Brown on a third-and-11.

Jackson's favorite target was tight end Mark Andrews, who had eight receptions for 112 yards and a TD.

"I tell Mark all the time, we're going to play some street ball and that's what the case is," Jackson said. "His job is to get open and I have to deliver the ball."

Murray ripped the Lions for 308 yards last week and his outing against Baltimore enabled him to become the second NFL quarterback to throw for 300 yards in his first two games (Cam Newton was the other).

But it's all about winning, and Murray has yet to experience that sensation.

"We got to be better, plain and simple, as far as communication, stuff like that," he said.

The Ravens opened in impressive fashion, moving 94 yards behind the feet and right arm of Jackson. He ran for 19 yards and went 5 for 5 for 74 yards, including three completions to Brown and a 27-yard touchdown pass to Andrews .

It was 10-6 before Jackson directed an 85-yard drive in which he carried four times for 30 yards and completed four passes for 55 yards, the final toss a 1-yard pass to tight end Hayden Hurst.

Arizona closed to 17-9 in the third quarter, but it was the third time the Cardinals got inside the Baltimore 5 and had to settle for a field goal.

In his return to Baltimore, Terrell Suggs was held without a sack. He played 16 years with the Ravens and became the franchise leader in career sacks before signing with the Cardinals as a free agent during the offseason.

"This was the weirdest thing I've ever been a part of," Suggs said.

HOW FAST IS FAST?

More than once, Jackson sprinted toward the sideline and appeared to have nowhere to go before a burst of speed allowed him turn the corner for good yardage.

The first time was a 19-yard gain in the opening drive, the last that pivotal 14-yard run in the closing minutes.

So, how fast is this guy?

Cardinals: RB David Johnson left in the first quarter with a wrist injury and returned shortly before halftime. He scored Arizona's lone TD. ... LG Justin Pugh played through an illness after being added to the injury report before the game.

Cardinals: Host winless Carolina, which will have some extra rest after losing to Tampa Bay on Thursday night.

Ravens: Travel to Kansas City for rematch of last December's thriller, won by the Chiefs 27-24 in OT, Baltimore's lone loss over the final seven regular-season games.