The Latest: Goodell: NFL will look at rules for coach hiring 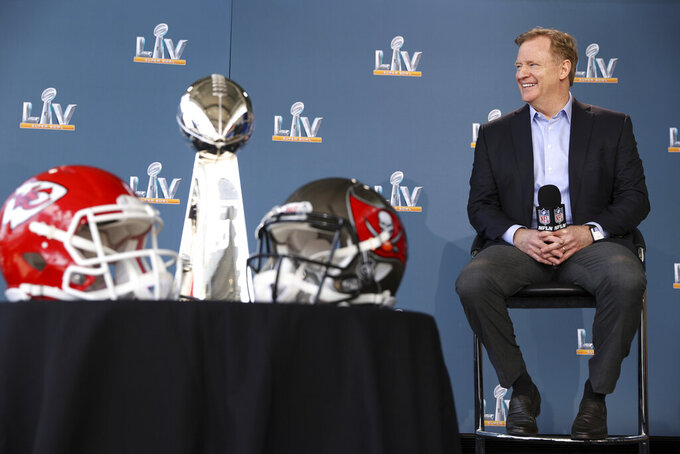 NFL commissioner Roger Goodell says the league will look into tweaking the rules for teams that hire new coaches as a way to ensure more diversity in the coaching ranks.

Goodell said at his annual Super Bowl news conference Thursday that the NFL has in the past considered making teams wait to hire head coaches until after the Super Bowl.

He said that’s something he expects to be brought up again and said there could be another alternative that doesn’t delay teams’ abilities to start building coaching staffs and working on the upcoming season.

Goodell lauded the NFL allowing teams to interview candidates via Zoom this year.

But he said more solutions are needed because a more diverse league will “make us a stronger league.”

Commissioner Roger Goodell says the NFL is planning to play international games in London and Mexico City next season if the pandemic allows for it.

The league canceled the four planned games in London and one in Mexico City in 2020 because of uncertainty about travel during the coronavirus. Goodell says the league felt it was safer to play all games in the 30 home stadiums in the United States because of the protocols in place.

Goodell says there’s no timeline for when the league has to decide whether to go ahead with international games in 2021.

Commissioner Roger Goodell says it’s far too early to talk about whether unvaccinated players will be playing next season or if fans will need to be vaccinated to attend games in 2021.

Goodell says the NFL hopes most of society is vaccinated by summer because it’s in the best interest of the country. Goodell says if the NFL’s protocols must adapt, then the league will do that.

He noted the NFL is endorsing the use of vaccines for the coronavirus pandemic by hosting 7,500 vaccinated healthcare workers at the Super Bowl on Sunday.

Goodell says the NFL will work with the NFL Players Association and that the league will work with local health officials and medical experts to make sure if they can have fans in the stands to do that safely.

Commissioner Roger Goodell says he wishes he knew the answer to what the 2021 season will look like. The lessons learned from playing this season through a pandemic means he knows not to project too far in advance.

Goodell says the NFL learned to wait as long as possible and prepare for uncertainty while finding solutions.

“That’s what we’ve done,” Goodell said. “I don’t know when normal is going to occur again.”

Goodell says the relationship between the NFL and NFL Players Association with the 32 teams has never been stronger and credited the communication needed to work through this season. He says he thinks the trust that’s been built will help the NFL moving forward and will be the long-lasting legacy of this season.

Kaepernick highlighted those issues in the 2016 season when he kneeled during the national anthem to protest racism and police brutality.

Goodell publicly apologized to Kaepernick last year for the league not listening to him enough and taking is concerns more seriously. Kaepernick has been unable to get a contract with any other team after being let go by the San Francisco 49ers following the 2016 season.

Commissioner Roger Goodell says the NFL will look into what changes from the pandemic season are worth keeping in a post-COVID-19 world. But he says he feels strongly in the value of training camp and preseason games.

NFL Players Association President J.C. Tretter of the Cleveland Browns is advocating getting rid of the offseason and OTAs permanently.

Goodell says it’s not time to take a public stance on what will stay from the 2020 season and what won’t.

But he did say “the virtuals are going to be a part of our life for a long time” because coaches and players were able to remotely work through the playbooks in 2020.

NFL Commissioner Roger Goodell says the league is not satisfied with only two minorities hired for seven head coach openings.

The New York Jets hired Robert Saleh, the first NFL coach who is known to be Muslim and the son of Lebanese immigrants, and Houston hired David Culley, making him only the league’s third Black head coach hired.

Goodell said he’s not sure there’s an issue the league has spent more time working with ownership on talking on Zoom sessions and individually. The commissioner says they’ve talked about the importance of being more diverse and continue considering policies that can help. He says ownership has shown their commitment and yes, they need to keep talking about changes the NFL needs to make.

Goodell says having two minority coaches hired this year wasn’t what they expected and not what they expect moving forward. Goodell noted three African-American general managers were hired with more diversity also seen among coordinators.

He says there’s a lot of positives the NFL needs to build on and that the commitment is there.

Commissioner Roger Goodell says an investigation into allegations of sexual harassment in the Washington Football Team’s organization will be finished soon.

Beth Wilkinson was hired following a report in the Washington Post that 15 female employees team alleged sexual harassment and a poor working culture in the organization.

Goodell says owner Dan Snyder has begun to make changes and is welcoming the probe.

Goodell says he also believes a dispute between Snyder and minority owners that is in arbitration will “get resolved shortly” and he hopes all parties will be able to move forward.

NFL commissioner Roger Goodell said it was an “extraordinary collective effort” to play through the pandemic without losing any games to COVID-19.

Goodell said at his annual Super Bowl news conference Thursday that “there were doubters” and a lot of unknowns. But he said innovative solutions were found through cooperation between the league and the players association.

Twenty-two thousand fans will attend Super Bowl 55 Sunday between the Buccaneers and Chiefs. That will include 7,500 health care workers vaccinated against COVID-19.