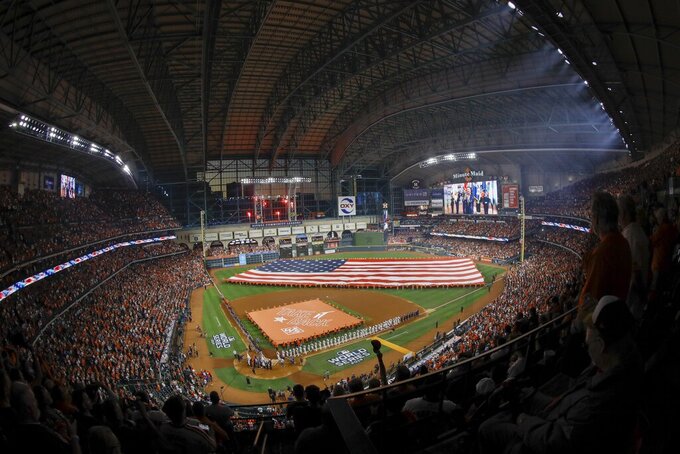 Players line up for introductions before Game 1 of the baseball World Series between the Houston Astros and the Washington Nationals Tuesday, Oct. 22, 2019, in Houston. (AP Photo/Tim Donnelly)

HOUSTON (AP) — The Latest on the World Series (all times local):

Five-time Pro Bowl defensive end J.J. Watt from the Houston Texas wore a Jose Altuve jersey when giving an enthusiastic "Play Ball!" before the Astros opened the World Series against the Washington Nationals on Tuesday night.

Texans players wore Astros gear when they departed Houston for their game at Indianapolis last weekend.

When Watt arrived at the stadium before Sunday's NFL game, he also sported an Altuve jersey, that time with the No. 27 and the 5-foot-6 second baseman's name facing the front. That was after Altuve's AL pennant-clinching two-run homer in the bottom of the ninth inning of Game 6 of the AL Championship Series to beat the New York Yankees on Saturday night.

Brian McCann didn't make it to the World Series as a player after returning to his original team. He was still there for Game 1 in Houston.

McCann, the primary catcher for the Astros' championship season two years ago, threw out the ceremonial first pitch Tuesday night to Evan Gattis, a catcher and designated hitter for that 2017 team.

Both players became free agents after the 2018 season in Houston.

McCann then signed with Atlanta, the team that he played on for the first nine of his 15 big league seasons. The 35-year-old seven-time All-Star announced his retirement right after the Braves lost in the deciding Game 5 of the NL Division Series earlier this month.

Before the 2017 and 2018 seasons with Houston, McCann had been with the New York Yankees for three years.

The 33-year-old Gattis didn't play this season. After two seasons in Atlanta, he played for four years in Houston.

A moment of silence was held before Game 1 of the World Series in memory of umpire Eric Cooper, who died last weekend after developing a blood clot following knee surgery.

Cooper had worked the AL Division Series between the New York Yankees and Minnesota Twins earlier this month.

The umpires at the World Series are wearing a patch in memory of Cooper. The crew chief is Gary Cederstrom, who had Cooper on his crew during that AL playoff series.

Right-handers Joe Ross and Wander Suero were added to the Washington Nationals' active roster for the World Series in place of Roenis Elías and Austin Voth.

Ross started Game 4 in the Division Series against the Los Angeles Dodgers in 2016, allowing four runs, three hits and a walk in 2 2/3 innings. Washington rebounded to tie the score before losing 6-5.

Suero entered in Game 3 after Los Angeles had scored four runs off Patrick Corbin to take a 5-2 lead. Suero allowed a three-run homer to Justin Turner, his first batter, and gave up a double before getting the final out of the inning. That was his only appearance of the series.

Elías and Voth were on the roster for the NL Championship Series sweep of St. Louis but did not pitch,

Trea Turner will be the first batter in this year's World Series when the Washington Nationals shortstop leads off Game 1 on Tuesday night against Houston right-hander Gerrit Cole.

The assistant general manager of the Houston Astros has issued a statement apologizing for using "inappropriate language" after a report in Sports Illustrated said he repeatedly yelled toward a group of female reporters during the team's celebration after clinching the AL pennant.

His remarks reportedly referenced Houston closer Roberto Osuna, who was suspended for 75 games last season for violating the league's domestic violence policy before joining the Astros in a trade from Toronto.

The Astros denied Monday night that his comments were directed at the reporters. That was before they released a statement from assistant GM Brandon Taubman hours before Game 1 of the World Series.

Major League Baseball also issued a statement Tuesday concerning the incident, saying it will interview those involved before commenting on the matter any further.

The statement from the league says in part: "everyone in baseball must use care to not engage in any behavior — whether intentional or not — that could be construed as minimizing the egregiousness of an act of domestic violence. We became aware of this incident through the Sports Illustrated article. The Astros have disputed Sports Illustrated's characterization of the incident."

Chris Devenski replaced Bryan Abreu on the Houston Astros' World Series roster against the Washington Nationals in a swap of right-handed pitchers.

A right-hander who turns 29 next month, Devenski has not pitched in a game since Sept. 29, the last day of the regular season. He made five appearances in the World Series against the Los Angeles Dodgers two years ago and got the win in Game 2 despite allowing Charlie Culberson's 11th-inning homer. He failed to hold a three-run lead in the ninth inning of Game 5, giving up Yasiel Puig's two-run homer and Chris Taylor's RBI single.

Abreu, a 22-year-old rookie who made his debut in July, was not on the roster for the Division Series against Tampa Bay, then was added for the League Championship Series against the New York Yankees. His only appearance was in the Astros' opening 7-0 loss, when he relieved to start the ninth inning, allowed a first-pitch home run to Gio Urshela, gave up Gleyber Torres' RBI grounder and was replaced with two outs and two on.

Houston again is carrying 12 pitchers, all right-handed, for the Series, which starts Tuesday night.