A lot of parallels: Elway has long been Lynch's idol, mentor 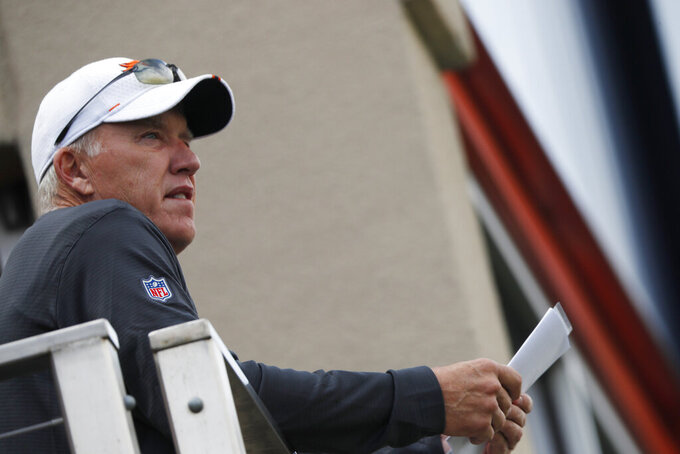 ENGLEWOOD, Colo. (AP) — San Francisco 49ers general manager John Lynch always wanted to be like John Elway, his idol growing up and his mentor in the NFL both on the football field and in the front office.

"John was a tremendous resource," Lynch said Saturday as his team wrapped up two days of joint practices with Elway's Denver Broncos in advance of their Monday night preseason game. "He's a good friend. We've got a lot of parallels in where we went to school and being two-sport athletes."

Both were tutored by celebrated California high school football coach Jack Neumeier and both were Stanford quarterbacks who also excelled on the baseball field before starring for the Broncos, albeit a decade apart and at different positions.

When Lynch was a rookie safety in 1993 with the Buccaneers, Elway gave him some pointers after a game that stuck with him his whole career.

That tutoring continued two decades later when Lynch served a sort of apprenticeship under Elway, the Hall of Fame quarterback-turned-general manager. He attended the 2013 NFL combine with Elway and sat with the Broncos' GM during the draft.

When the 49ers approached him about their GM job, Lynch sought Elway's advice again, and Elway told him he could be great in the front office just as he was on the football field for 15 NFL seasons and in the broadcast booth for eight more.

"He was a guy that was a great competitor, and so I thought that being a GM for him would be a really good fit," Elway said, before quickly adding: "And I apologized to him a couple of times. I told him, 'I hope you still like it.' Because I don't like it after two losing years."

Unable to find a suitable replacement at QB since Peyton Manning retired in 2016, the Broncos have posted back-to-back losing seasons for the first time since 1971-72 after going to two Super Bowls and winning one in Elway's first five seasons.

An 11-21 two-year skid led Elway to make yet another offseason change at both head coach (Vic Fangio for Vance Joseph) and quarterback (Joe Flacco for Case Keenum) and use a second-round draft pick on Missouri QB project Drew Lock.

The 49ers already have their franchise quarterback in Jimmy Garoppolo , but he blew out his left knee last September, and San Francisco stumbled to 4-12 after going 6-10 in coach Kyle Shanahan's first season. Garoppolo won all five of his starts in 2017 following his stunning trade from New England.

At 59, Elway is 12 years older than Lynch, who freely admits it was Elway's poster he had on his wall growing up.

"I used to try to walk pigeon-toed so I'd be more like him and all those things," Lynch said, chuckling. "But now to call him a friend and I think the little bit of time in an offseason when he had me come in here was very integral in my motivation to do this and saying, hey this might be something that someday I might want to do.

"So, he's been a tremendous resource and I have a great amount of respect and admiration for him in everything he's done."

The Broncos and 49ers got together for workouts this week largely because of the close relationship between Elway and Lynch, and the Broncos ejected two players from practice for throwing punches during a dust-up Saturday: roster longshots Brendan Langley and Bug Howard.

"Particularly when you have a great partner to work with, there's so much you get out of this work," Lynch said, rattling off advantages such as facing different schemes and unfamiliar opponents to evaluating how players handle the uptick in intensity.

"Vic even said to his guys, 'Hey, these are our teammates for the next couple of days,' and Kyle reiterated it," Lynch said before Saturday's scuffle. "That doesn't mean that you're not competing your tail off, but it means let's respect each other."

Elway is a big fan of the joint practices not only as a tool to evaluate his own roster, but to get a look at another team's bubble players.

Mike Shanahan , who coached both Elway and Lynch, also attended the joint workouts, watching both his son's team and his old team Friday and Saturday.

"Mike's always been a big part of this organization, always will be," Elway said. "And it's nice to have him come back out."