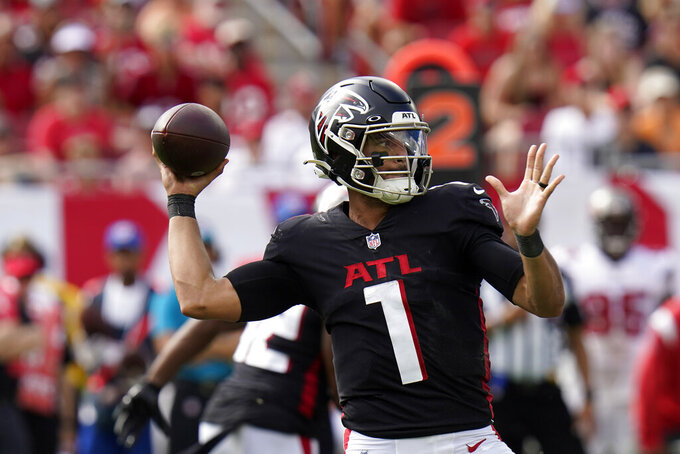 Atlanta Falcons quarterback Marcus Mariota (1) throws a pass during the second half of an NFL football game against the Tampa Bay Buccaneers Sunday, Oct. 9, 2022, in Tampa, Fla. (AP Photo/Chris O'Meara)

ATLANTA (AP) — There may be no better opportunity for Marcus Mariota to prove he can be more than a bridge at quarterback for the Atlanta Falcons than in this week's matchup with San Francisco and its top-rated defense.

Mariota and the Falcons (2-3) face the 49ers (3-2), who allow only 12.2 points per game, tied for the league lead. The defense was dominant in last week's 37-15 win over the Carolina Panthers, another NFC South team.

Mariota has played about as expected of a former high draft pick trying to revive his career. He has only four touchdown passes with four interceptions but has given the offense another running threat.

Mariota has been held under 200 passing yards in three of five games. The Falcons have been a run-first offense, gaining at least 150 yards on the ground four times.

The 49ers lead the NFL in total defense and rushing defense. They rank third against the pass, so there are no easy answers for Mariota and the Falcons.

“We understand we got a big challenge in front of us,” Mariota said. “It’s a really good defense, great players who are kind of all over the board.”

The 49ers have overcome injuries to quarterback Trey Lance and running back Elijah Mitchell. Jimmy Garoppolo has five TD passes with one interception while Jeff Wilson Jr. has rushed for 375 yards while averaging 5.1 yards per carry.

“I think he doesn’t mess around,” 49ers coach Kyle Shanahan said of Wilson. “He knows himself, he puts his foot down and goes forward.”

The Falcons signed Mariota to a two-year deal immediately after trading 14-year starter Matt Ryan to Indianapolis. Rookie third-round pick Desmond Ridder has yet to play for Atlanta.

Falcons defensive tackle Grady Jarrett was in the news last week after being called for a controversial roughing-the-passer penalty against Tampa Bay quarterback Tom Brady. The much-criticized call wiped a sack off Jarrett's statistics and robbed the Falcons of an opportunity to mount a potential game-winning drive.

Smith said Jarrett is playing as if he's trying to earn a contract instead of a veteran who just signed a new deal.

“I think it’s impressive the guy gets a new contract, and I don’t know if there’s anybody working or playing harder than he is,” Smith said.

Jarrett leads Atlanta with 3 1/2 sacks and five tackles for losses.

“He’s having a terrific season,” Smith said. “He’s one of those guys where the more I’ve been around him, the more fortunate I feel I am to be able to coach a guy like Grady. He’s rare.”

The 49ers saved themselves two cross-country flights by practicing in West Virginia this week after last Sunday’s win at Carolina. San Francisco is 4-0 in the second game of two-game trips the past three seasons.

San Francisco sustained big losses to its secondary last week when starting cornerback Emmanuel Moseley went down with a season-ending knee injury and safety Jimmie Ward broke his hand on his first play back from a hamstring injury that sidelined him the first four games. But the Niners are in much better shape to weather those losses this year than in the past with big-ticket free-agent acquisition Charvarius Ward locking up one cornerback spot and safeties Talanoa Hufanga and Tashaun Gipson making big plays each week.

Moseley’s spot could be taken either by second-year players Deommodore Lenoir or Ambry Thomas, rookie Sam Womack or veteran Jason Verrett, who is close to returning from a knee injury that has sidelined him since Week 1 of the 2021 season.

“Last year that was our biggest worry,” Shanahan said about the secondary. “We knew how thin we were there with the rookies and stuff and then losing Verrett that first game was tough. That’s why we had to go sign vets right away. We’ve had the injuries this year, but we have some rookies who got experience last year and we also brought in a couple of guys and I like our draft picks too, so we got some more depth, which helps.”

The Falcons will again be without top running back Cordarrelle Patterson, who is on injured reserve following knee surgery. Tight end Kyle Pitts could return after missing last week’s 21-15 loss to Tampa Bay with a hamstring injury.

Tevin Coleman’s first extensive action in his second stint with San Francisco went much better than the end of his first. Coleman averaged 1.9 yards per carry in eight games in 2020 before leaving to sign with the Jets. He returned to San Francisco last month and looked fresh last week when he had a TD catch and a TD run.

That could earn Coleman even more time this week when he faces the Falcons, the team he spent his first four seasons with before leaving for the Niners.

“I’ve been impressed,” Shanahan said. “It’s kind of what we expect him to do. ... I thought we were really fortunate to get Tevin back here when we did.”