Mariota's play only 1 of many problems for slumping Falcons 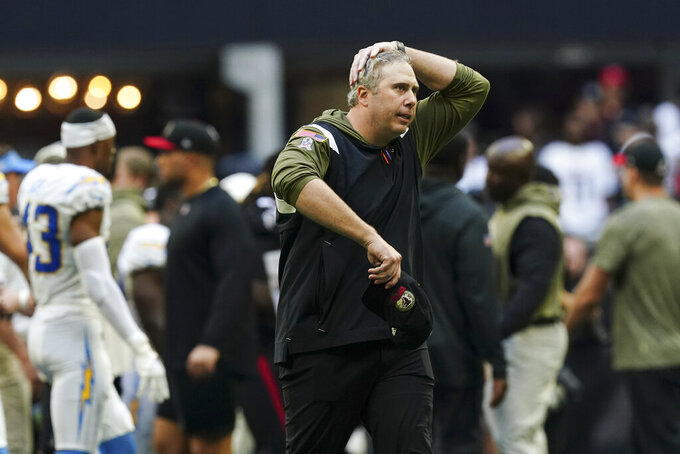 The Falcons are 4-6, falling out of a first-place tie in the weak NFC South. Even after Mariota and the offense struggled in Thursday night's 25-15 loss at Carolina, Smith gave no indication he's ready to give rookie Desmond Ridder an opportunity to lead the team.

Smith dismissed postgame queries about Mariota as “popular narratives” and “the easy questions to ask.”

The difficult reality for the Falcons is that quarterback play is only one issue on a long list of problems exposed by the two straight losses. Atlanta lost the battles on both lines of scrimmage against the Panthers, failing to protect Mariota and finding no way to stop Carolina's running game.

The Falcons were a surprise team in the NFL at 4-4 because Smith successfully built a running game that helped protect a suspect passing attack and weak defense. The Panthers stacked the box on defense against the run, used pressure to force Mariota into making bad decisions and were more successful running the ball.

No Atlanta running back gained more than 32 yards and the Falcons didn't have a rushing touchdown.

Mariota was the leading rusher with 43 yards on three carries and said he should have run more instead of taking five sacks. He threw for 186 yards with two touchdowns and an interception — and said he forced too many passes.

“I was playing a little bit outside of myself,” Mariota said. "Tried to make a play too many times and it hurt our team.”

Mariota isn't the only NFL quarterback to struggle with a new team this season. But Smith isn't ready to label Mariota as a failed experiment. When asked if he considered putting Ridder in the game, Smith said, “No. We’re trying to win a game.”

That was hardly a vote of confidence in Ridder, the third-round pick from Cincinnati who was impressive at times in the preseason.

Smith's loyalty to Mariota is understandable. The two also worked together in Tennessee, where Smith was the offensive coordinator. Mariota lost his starting job with the Titans in 2019 but his dual-threat skills have been a good fit in Atlanta's run-first offense — at least as long as the Falcons were winning.

If the Falcons continue to lose ground in the NFL's worst division, the spotlight on Smith's quarterback decision will only intensify. and the Panthers' winning strategy of loading their run defense and putting pressure on Mariota will be duplicated by future opponents.

The Falcons' challenge is to generate better offensive balance, with or without Mariota.

Very little went right for Atlanta, but a 26-yard run by Mariota helped to make the running totals look respectable. The Falcons averaged 5.5 yards on 25 carries, even though Tyler Allgeier was held to only 20 yards on eight carries.

Tight end Kyle Pitts had only two catches for 28 yards on eight targets. The 2021 first-round pick thrived as a rookie last season, setting a team record for receiving yards (1,026) for a tight end. He has only 25 catches for 313 yards and two touchdowns through nine games.

Wide receiver Khadarel Hodge, playing for his fourth team in his fifth NFL season, finally had his first career touchdown catch. His 25-yard reception from Mariota in the fourth quarter provided the feel-good moment of a long night for the offense. He had two catches for 37 yards.

The usually reliable Younghoe Koo missed two extra-point attempts, his first two misses of the season. He made each of his 30 attempts in 2021 and had been good on 71 consecutive attempts before his misses. Koo was kicking in wet and windy conditions and he made a 33-yard field goal.

Minus-15 — The Falcons wilted on offense when they took possession at their own 34 with 2:33 remaining and a chance to pull even or take the lead. Two sacks, a 1-yard loss and an incompletion resulted in a loss of 15 yards and a change of possession on downs, setting up a Panthers field goal.

After giving up 232 rushing yards and two touchdowns to Carolina, the Falcons will face the league's top rushing team when Chicago visits Atlanta on Nov. 20.