Miller believes in Lock, goes back to basics to sack Mahomes 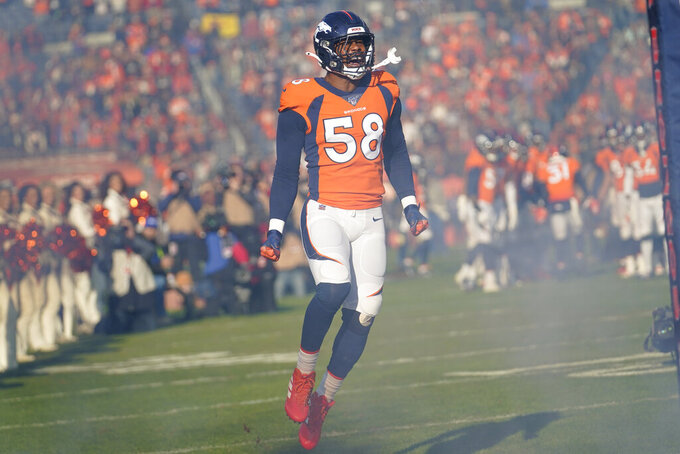 FILE - In this Dec. 29, 2019 file photo, Denver Broncos outside linebacker Von Miller reacts before an NFL football game against the Oakland Raiders in Denver. Miller's read on the Super Bowl is this: Patrick Mahomes and the Kansas City Chiefs will be a handful. The Broncos Pro Bowl pass rusher knows that from first-hand experience. But he's predicting a San Francisco 49ers win.(AP Photo/Jack Dempsey)

DENVER (AP) — Take the word of a Pro Bowl pass rusher who's expended a lot of energy chasing him around: Patrick Mahomes is the best QB in the business at the moment.

Still, Broncos standout Von Miller will be siding with San Francisco over Kansas City in the upcoming Super Bowl.

Sorry, Chiefs fans, Miller believes in the 49ers and their vaunted defense more than Mahomes and that speedy offense.

It's a rivalry thing.

Miller's putting Mahomes and the rest of the league on notice, too. He's going back to the basics this offseason to gain another step to his already quick pass-rushing abilities. His game plan: Run hills and stairs in San Francisco to prepare for his 10th season.

"I'm attacking things like I'm back in college, getting ready for the draft and the combine," explained Miller, who's teaming up with USAA and the Veterans of Foreign Wars to award a member of the military, along with their guest, a trip to the Super Bowl. “I'm going back to what I know makes me a great player. That's acceleration, that's endurance and that's getting back in the weight room. Those three things helped me be the type of player I am. I'm getting back to it.”

At the Pro Bowl this week, he's been taking a young generation of pass rushers under his wing and teaching them his tricks of the trade. Asked why he's giving away his trade secrets, Miller quoted a saying popularized by the Spider-Man series: "With great power comes great responsibility," Miller mused.

“I just feel like that's what I'm supposed to do,” said Miller, who has company for the Pro Bowl game in Orlando, Florida, on Sunday with teammate Courtland Sutton recently added to the roster. “All the great pass rushers before me, they helped me out in the things I use in my game today. It would just be wrong not to give back information that I know that would make them better players. It's what I'm supposed to do.”

Mention Miller's current quarterback and he instantly gushes. He's a big fan of Drew Lock, the second-round pick who started the last five games as the Broncos went 4-1 to finish out a 7-9 season. The team recently hired a new offensive coordinator in Pat Shurmur to work with Lock.

“I thought he was going to be good without a new offensive coordinator. And now they're bringing in all these guys to help him be successful?” Miller said. “The sky's the limit for him.”

"Whenever you have a confident quarterback out there balling and doing all the great stuff he does, everybody feeds off that," said Miller, who finished with eight sacks last season, his lowest total since 2013. “It gets everyone excited.”

Denver needs that sort of swagger given the rise of Kansas City. The Chiefs are poised to rule the AFC West for seasons to come behind Mahomes.

Miller will be taking some company to the Super Bowl in Nicholas Lopez, a corporal in the United States Marine Corps from 2005-2013. The Grain Valley, Missouri, resident — and Broncos fan — will bring along his mother. USAA has coordinated similar efforts with other NFL players.

"To give back the smallest thing to these veterans, it means the world to me," Miller said.

Here's how Miller sees the Super Bowl playing out: San Francisco efficiently running the ball and building a 28-17 lead. The 49ers bottle up Mahomes and the high-powered offense behind a defensive front that includes Nick Bosa, Dee Ford, Arik Armstead and DeForest Buckner. The Chiefs score late before San Francisco runs out the clock.

“If that's right," Miller said with a laugh, "I'm going straight to Vegas."