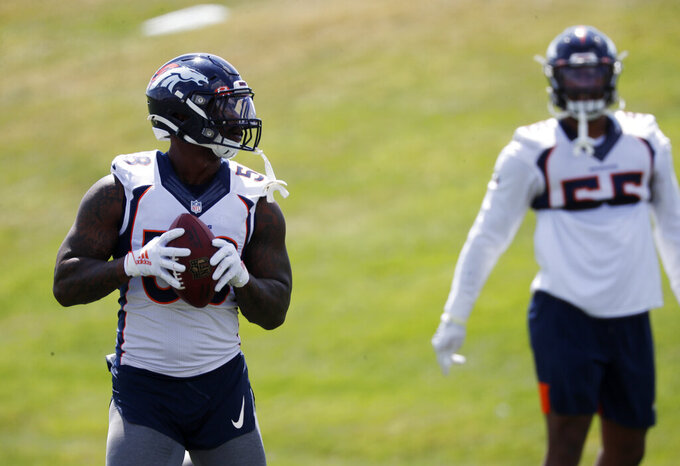 Denver Broncos outside linebacker Von Miller, left, throws a pass to outside linebacker Bradley Chubb as they take part in an NFL football practice Tuesday, Aug. 27, 2019, at the team's headquarters in Englewood, Colo. (AP Photo/David Zalubowski)

ENGLEWOOD, Colo. (AP) — Von Miller is on the cusp of his 100th career sack, not counting his most famous fumble-inducing hits on Cam Newton in Super Bowl 50, yet he insists it's his pass-rushing partner who will turn heads this season.

Bradley Chubb led all rookies last year with a dozen sacks but said at the Denver Broncos' kickoff luncheon that it "wasn't the best film I could have put out there."

So, he spent his offseason picking up new moves from Miller like the "cross chop," improving his stamina and working tirelessly to better decode offenses in hopes all of it will "help me be a faster player and a better player. And I feel it's going to help me out."

The root of this transformation eludes Miller.

"I don't even know what he did, but if I find out what he did, I'm going to start doing it," Miller said, adding, "I think it's just natural for defensive players to take a huge leap from year 1 to 2. You saw with me I had 11 sacks and I jumped to 18½ sacks my second year. Saw the same thing with Khalil Mack and Vic Beasley and all of these guys."

Miller said Chubb has taken the leap to a whole new level, declaring his teammate "will definitely be a brand-new player this season."

The Broncos think Miller can transform his game, too.

Miller was in attendance with a handful of his teammates and accepted the challenge as soon as he shook Fangio's hand afterward, telling his new head coach he was eager to play for the longtime defensive guru known for getting the most out of his pass rushers.

Entering his ninth season, Miller has 98 career sacks, not counting the 6½ he has in the playoffs. That's almost half of Hall of Famer Bruce Smith's NFL record of 200 set during a 19-year career with Buffalo and Washington from 1985-2003.

"He's a special talent. He's got the full package, the speed, the technique, the quickness, the agility," Smith said. "I enjoy turning the game on just to watch him play."

As far as Miller breaking his record, well, Smith said, "He's off to a great start."

Miller hasn't been back to the playoffs since being named MVP in Denver's 24-10 win over Carolina in the Super Bowl that capped the 2015 season.

Instead, he's spent his last three Januarys conducting his most vigorous workouts of his offseason and targeting whichever areas of his game he felt needs fine-tuning.

"It kind of hit me in the gut I couldn't get 100 before I was 30," Miller said. "But it's motivating to know I'm not the only guy that has been at that number."

"We all know how that turned out for him," Miller said.

Having an improved Chubb also harassing QBs should help Miller stack up the sacks, but he said that's not his motivation for teaching his teammate new moves.

Miller said he's just channeling former teammates DeMarcus Ware and Elvis Dumervil, who helped him hone his skills when he was younger.

"DeMarcus used to always tell me, 'Young buck, are you finished yet? Are you done?'" Miller said. "I say the same things to Chubb: 'Are you done getting better?'"

Because Miller sure isn't.