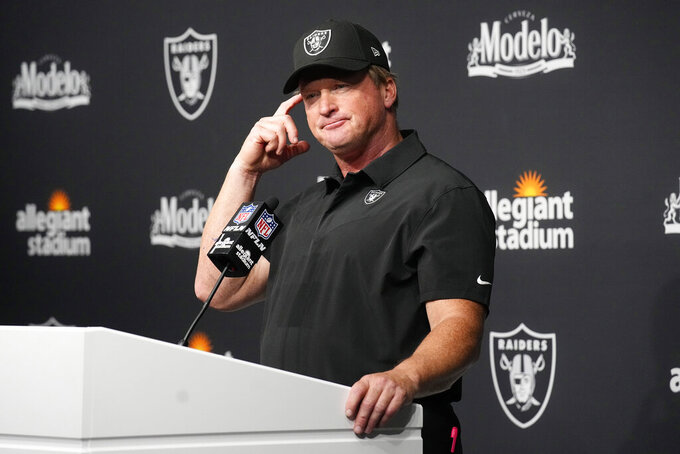 FILE - Las Vegas Raiders head coach Jon Gruden attends a news conference after an NFL football game against the Miami Dolphins in Las Vegas, in this Sunday, Sept. 26, 2021, file photo. Jon Gruden is out as coach of the Las Vegas Raiders after emails he sent before being hired in 2018 contained racist, homophobic and misogynistic comments. Gruden released a statement Monday night, Oct. 11, 2021, that he is stepping down after The New York Times reported that Gruden frequently used misogynistic and homophobic language directed at Commissioner Roger Goodell and others in the NFL.(AP Photo/Rick Scuteri, File)

Jon Gruden is being dropped from the Madden NFL 22 video game after he resigned as coach of the Las Vegas Raiders because it was reported that he used racist, homophobic and misogynistic language in emails.

EA Sports tweeted Wednesday that it was “taking steps to remove” Gruden from the latest version of its popular pro football game and would “replace him with a general likeness via a title update in the coming weeks."

The game maker said it is “committed to taking action in maintaining a culture of inclusion and equity.”

The Wall Street Journal and The New York Times reported that, from 2011-18 while he was an ESPN analyst between coaching jobs, Gruden used offensive terms in messages he wrote to former Washington club executive Bruce Allen.

Gruden stepped down Monday night during the fourth season of a 10-year, $10 million deal with the Raiders. He was 22-31 with no playoff appearances in his second stint with the team.

The Tampa Bay Buccaneers, the club he led to a Super Bowl title nearly two decades ago, removed him from the Ring of Honor at Raymond James Stadium on Tuesday.