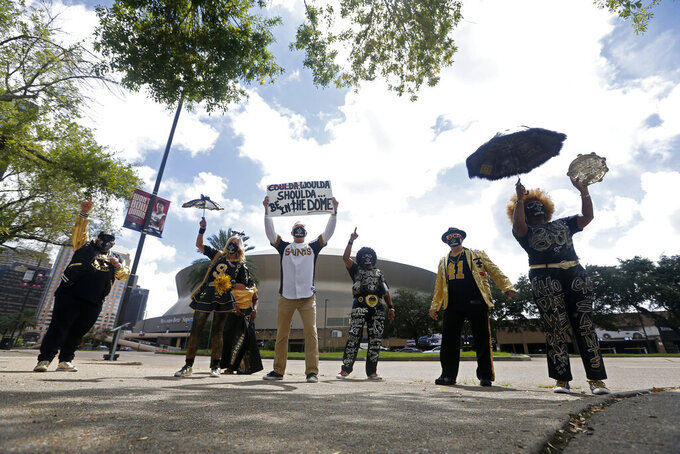 New Orleans Saints "superfans" participate in a moment of solidarity outside the Superdome before an NFL football game between the Saints and the Tampa Bay Buccaneers in New Orleans, Sunday, Sept. 13, 2020. The game is being played without fans due to the COVID-19 pandemic. (AP Photo/Brett Duke)

NEW ORLEANS (AP) — The next Super Bowl in New Orleans has been pushed back from 2024 to 2025 in order to avoid a conflict with the city's traditional Mardi Gras celebrations, the NFL announced Wednesday.

The NFL said the change was approved by all 32 clubs during a virtual league meeting.

New Orleans was initially named the 2024 host city in 2018, but the NFL's decision to lengthen the regular season schedule from 16 to 17 games in 2023 created a conflict in 2024 with Mardi Gras, which annually draws millions to the city for parades and balls during a several-week Carnival season that ends on “Fat Tuesday.”

Mardi Gras is tied to the Catholic calendar and falls on the Tuesday before Ash Wednesday. It occurs on Feb. 13 in 2024 and March 4 in 2025. The city is most crowded during the final week of Carnival and hosting another major event such as a Super Bowl at that time would be exceedingly difficult.

The new host city for the 2024 Super Bowl remains to be named, the NFL said.