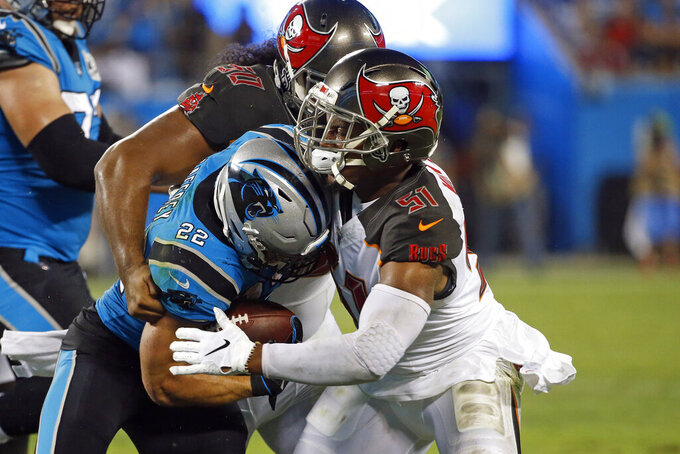 CHARLOTTE, N.C. (AP) — Carolina Panthers fans voiced their displeasure more than once with boos during a 20-14 loss to the Tampa Bay Buccaneers on Thursday night.

Perhaps being soaked by an early evening thunderstorm that delayed game action in the first quarter for 25 minutes led to their ill mood. But those who remained at Bank of America Stadium throughout had to be wondering how a Panthers season that started with high expectations is now teetering on the brink of disaster after an 0-2 start.

That became certain after Christian McCaffrey's fourth-and-one fake reverse was stopped for no gain with 1:22 to play.

"It came down to the ball is in my hands and I've got to make a play at the end of the game, and I didn't," McCaffrey said.

It marked the third time Carolina was unable to convert a fourth-and-one play. Quarterback Cam Newton was stopped in the first quarter, and a pass by Newton was incomplete earlier in the fourth quarter.

The Panthers were just 3 of 14 on third downs, too.

Oh, and they failed to score a touchdown.

"It's extremely frustrating knowing that you're getting opportunities and you're not putting the ball in the end zone," Newton said

Carolina's loss came on a night in which the Panthers were afforded numerous opportunities to even their record following a 30-27 home loss five days earlier against the Los Angeles Rams.

Tampa Bay had a missed touchdown catch on a drive that resulted in a missed field goal late in the third quarter, and the Buccaneers committed 12 penalties.

But the Panthers' offense misfired time and again on a night in which Carolina's points came on four field goals and a safety by Luke Kuechly.

"Through my lens, it's hard to look defensive guys in the eyes after a game like this," Newton said. "Offensively, we've got to hold up our end of the bargain. We just didn't uphold our end. And we're past due."

Newton, who had offseason shoulder surgery, was questioned earlier in the week about his team's lack of deep throws.

He appeared to answer those critics with a 44-yard completion to Curtis Samuel late in the first quarter. But offensive line breakdowns led to pressure on six throws and Newton was sacked three times. He completed 25 of 51 passes for 333 yards.

The third all-time rushing quarterback in NFL history, Newton followed his career-low minus-two yards in Sunday's loss with a second-worst game of two carries for zero yards. For the season, Newton now has five carries for minus-two yards with two fumbles.

Were McCaffrey's struggles a result of Newton's inability to establish a running game that has churned for 4,808 yards in his first eight NFL seasons?

The loss gives Carolina its ninth 0-2 start in the franchise's 25-year history — and first since 2013.

In 2013, the Panthers started 0-2 and 1-3 before an eight-game winning streak led to a 12-4 record. It marks the only time Carolina has recovered from an 0-2 start to have a winning record.

Even worse for the Panthers, Thursday's loss marks the ninth time Carolina has started a season with two straight home losses. And the best the Panthers have ever done after losing their first two home games was 7-9 (in 1997, 2000, 2004 and 2007).

The home loss was the team's fifth straight. That is tied for fourth-longest in franchise history.

Newton said he heard — and understood — the fans' frustration in the form of boos.

"It's embarrassing," Newton said. "I hear the fans. Walking off the field, I can't deny the fact that I hear that. You can't blame them. They deserve better."