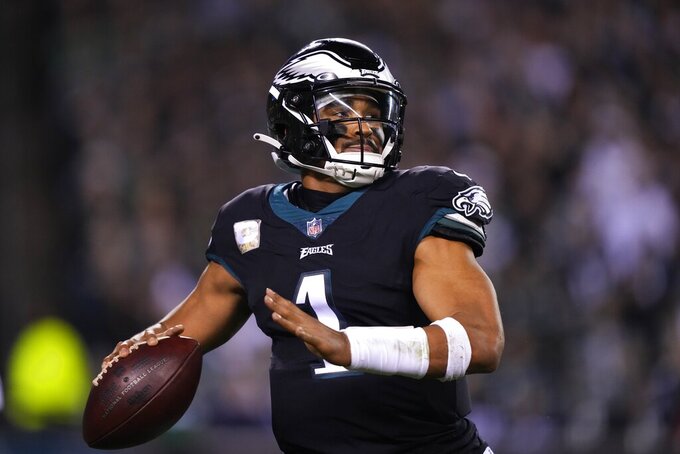 AGAINST THE SPREAD: Tennessee 8-3; Philadelphia 6-5

TURNOVER DIFFERENTIAL: Titans plus-2; Eagles plus-13.

EAGLES PLAYER TO WATCH: A.J. Brown will face his former team for the first time after last spring’s draft-day trade that brought the star receiver to Philadelphia following three standout seasons in Tennessee. The Eagles traded the No. 18 overall pick and a third-rounder to the Titans, then signed him to a four-year deal with $57 million guaranteed. With good friend Jalen Hurts throwing him passes, Brown has caught 53 balls for team-best totals of 831 yards, seven TDs and 15.7 yards per catch. He struggled through an illness against the Packers but was feeling better when the Eagles returned to practice on Wednesday. Brown caught a TD against Green Bay but dropped a pass and lost a fumble for the second straight game.

TITANS PLAYER TO WATCH: WR Treylon Burks was the player selected at No. 18 overall with the pick from the Eagles. Burks has had a strong rookie campaign, making 24 catches for 334 yards, and grabbed 11 balls for 181 yards in his last two outings. Burks is still searching for his first receiving touchdown, though he did get his first NFL TD when he recovered teammate Derrick Henry’s fumble in the end zone against the Bengals.

KEY MATCHUP: Tennessee’s defense against Hurts. The Philadelphia QB is firmly in the MVP race after a breakout season in his second as the full-time starter and third overall. The 2020 second-round pick set a franchise record for a quarterback with 157 rushing yards in last week’s win over Green Bay. Hurts has thrown for 2,560 yards with 17 TDs and just three interceptions while ranking third in the league with a 105.6 rating, and he has rushed for 597 yards and 8 TDs. The Titans are stingy on defense, having gone eight straight games without allowing an opponent to score more than 20 points.

SERIES NOTES: The Titans have split a pair of games at Lincoln Financial Field but gave up 43 points in a loss there on Nov. 23, 2014.

STATS AND STUFF: The Eagles started 10-1 four other times in team history and reached the title game all four times. They won the NFL championship in 1949 and the Super Bowl following the 2017 season, and lost the Super Bowls for 1980 and 2004. … With Hurts and RB Miles Sanders’ 143 yards leading the way, Philadelphia ran for 363 yards against Green Bay to come within 13 yards of matching the club record for rushing yards in a game set on Nov. 21, 1948. … Philadelphia’s kickoff coverage struggled against Green Bay, giving up returns of 38, 52 and 53 yards. … The Eagles lead the league in turnover differential and their 23 takeaways also are tops in the NFL. … For the Titans, Henry is second in the NFL in scrimmage yards (1,326), rushing yards (1,048) and rushing TDs (10). But the two-time NFL rushing champ had an uncharacteristically low output on the ground against the Bengals, running for just 38 yards. However, he did set a career high with 79 receiving yards. … QB Ryan Tannehill has thrown for 1,976 yards and 10 TDs while completing 65% of his passes. … S Kevin Byard is scheduled to make his 100th career start on Sunday. The 2016 third-round pick has 24 career interceptions. … Tennessee is 15-5 against the NFC since 2018.

FANTASY TIP: Eagles WR Quez Watkins could be a good waiver-wire pickup to fill an injured spot in fantasy owners’ lineups. Watkins has seen his role increase in the last two games without Goedert in the lineup. Goedert will miss his third game in a row, and the Eagles likely will look to throw the ball against the Titans’ 31st-ranked passing offense. In the last two games, Watkins has been targeted seven times and made five catches for 66 yards with a touchdown reception in each game. In his first nine games, he was targeted 17 times, with 12 catches for 193 yards and one TD.