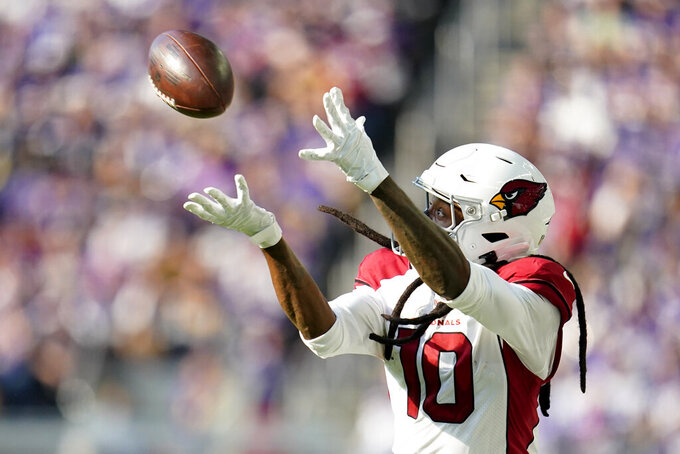 Arizona Cardinals wide receiver DeAndre Hopkins (10) catches a pass during the second half of an NFL football game against the Minnesota Vikings, Sunday, Oct. 30, 2022, in Minneapolis. (AP Photo/Abbie Parr)

TURNOVER DIFFERENTIAL: Seahawks plus-3; Cardinals plus-3.

SEAHAWKS PLAYER TO WATCH: CB Tariq Woolen. When the Seahawks and Cardinals played a few weeks ago, Woolen capped the victory for Seattle by intercepting his fourth pass of the season with less than four minutes remaining. The rookie has been terrific to the point he was targeted only a couple of times last week by the Giants. But in that first meeting against the Cardinals, DeAndre Hopkins was still serving his suspension. And Hopkins has looked to be back in his old form with 22 catches in his first two games. Expect Hopkins and Woolen to see each other more than a few times.

CARDINALS PLAYER TO WATCH: DL J.J. Watt. The five-time All-Pro and three-time Defensive Player of the Year is quietly putting together his best season since 2018. Watt had two sacks against the Vikings last week, putting him on pace for about 10 this season. The 33-year-old is a big part of the pass rush that also needs Zach Allen and Markus Golden to produce.

KEY MATCHUP: Seahawks QB Geno Smith gets another chance against a Cardinals defense that ranks 23rd against the pass and is giving up more than 26 points per game, which ranks 30th.

SERIES NOTES: The Seahawks have won three of the past four against the Cardinals.

STATS AND STUFF: Cardinals WR DeAndre Hopkins topped 800 receptions last week. At 30 years old, he became the third-youngest receiver in NFL history to reach the 800 mark. Only Larry Fitzgerald and Antonio Brown reached the mark sooner. ... Hopkins has caught a pass in 138 straight games, which is the longest active streak in the NFL. ... The Cardinals have returned two fumbles for touchdowns and two interceptions for touchdowns. The four TDs on defensive plays leads the NFL. ... Watt has 27 games with at least two sacks. Watt's two-sack game against the Vikings last week was his first since joining the Cardinals. ... The Cardinals sacked Smith five times in the first game of this year's series. It's the most sacks the Seahawks have allowed this season. ... Smith leads the NFL in completion rate (72.7%) and is third in passer rating (107.2). One of two games where Smith had a passer rating under 99 was the Week 6 matchup against the Cardinals where he was 20 of 31 for 197 yards and no touchdowns. ... Rookie RB Kenneth Walker III had 97 yards rushing on 21 carries in the first meeting with the Cardinals in his first career start. ... WRs Tyler Lockett and DK Metcalf each had TD catches last week, the second time this season and 11th time since 2019 they have each had a TD catch in a regular-season game ... Seahawks TE Will Dissly was the NFC special teams player of the week after forcing a fumble and recovering another fumble on punt returns in Seattle’s win over the Giants. It’s the fourth time this season the Seahawks had a player of the week in the NFC. ... OLB Uchenna Nwosu had two sacks last week and five on the season, matching his career high set last season with the Chargers. ... CB Michael Jackson had career-high seven tackles and three pass breakups last week. ... LB Jordyn Brooks had a career-high 20 tackles in the Week 18 game at Arizona last season.

FANTASY TIP: The Cardinals have looked better on offense the past two weekends. Hopkins is the biggest producer, but second-year WR Rondale Moore and TE Zach Ertz have also seen a bump in production. Both had good games against the Vikings and should be a large part of the game plan vs. the Seahawks.