NFL language: from Hail Mary to Pick-6 on Any Given Sunday 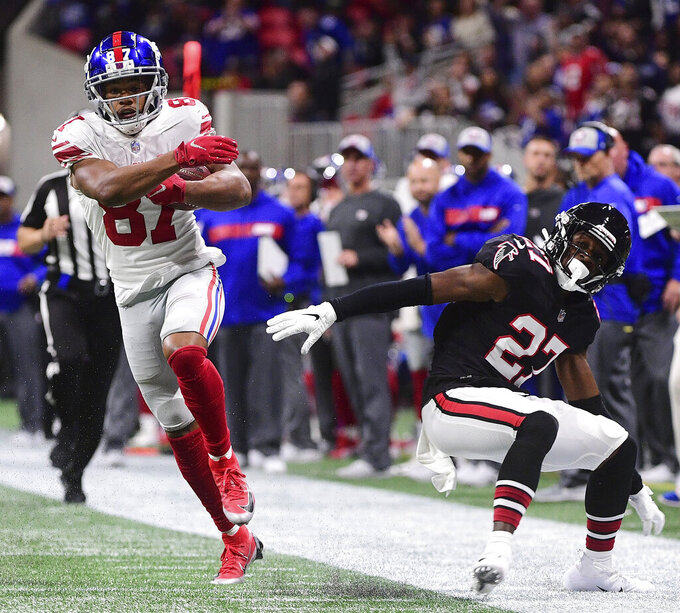 FILE - In this Oct. 22, 2018, file photo, New York Giants wide receiver Sterling Shepard (87) jukes to get by Atlanta Falcons strong safety Damontae Kazee (27) during the second half of an NFL football game in Atlanta. Juke: When any player make a deceptive move to fake out an opponent on the field. Often, but not always, applies to running backs and wide receivers. (AP Photo/John Amis, File)

NEW YORK (AP) — Like most sports, football has its own lexicon. Here's a look at 32 words and phrases — one for each franchise — that have long been identified with the NFL (in alphabetical order):

A-gap — The gap between the center and guard on the O-line. Each gap is described in such a fashion, so the B-gap is between the guard and tackle, the C-gap between the tackle and tight end, etc.

Any Given Sunday — The adage refers to the idea that any team can beat any other in a given week, regardless of record. It rarely applies to opponents of the New England Patriots in the Tom Brady/Bill Belichick era. Also the title of a 1999 football movie starring Al Pacino.

Audible — While some coaches frown on it, and some even prohibit young quarterbacks from doing it, the audible is critical to any offense. It's simply switching from the play called in the huddle to another play, using language that can include colors, numbers, places — remember Peyton Manning's "Omaha"?

Blitz — When the defense sends more than three or four rushers at the quarterback to disrupt or stop the offense. One of the most widely used is the zone blitz, popularized by longtime defensive coordinator Dick LeBeau in Pittsburgh.

Bomb — A long pass attempt to either score quickly or stretch the defense to assist the run game or short/intermediate passing game.

Bootleg — The quarterback will fake a handoff to a running back heading one way and will "hide" the ball by his hip or thigh as he runs the other way. Bootlegs usually are called close to an opponent's end zone. Hard to fathom, but even slow pokes such as Peyton and Eli Manning have scored this way.

Check-down pass — Everyone is covered deep. Or they haven't gotten deep. Or there are no receivers who can get open deep. So the quarterback finds his check-down option, usually a running back or tight end. One reason completion percentages have risen in recent years is the use of check downs.

End around — A similar play to a sweep or a jet sweep, except it's always run by a receiver who has come in motion. The Chiefs used this play to great effect in the fourth Super Bowl when they upset Minnesota.

Game plan — The strategy each team puts together weekly. Some game plans were as thick as the Manhattan phone book — if you recall what phone books looked like before everyone, including NFL teams, went digital. Players are expected to memorize game plans well before kickoff, with QBs and defensive signal callers needing to master virtually every position's responsibilities.

Gridiron — When the game was invented, before the NFL even existed and then in its early years, fields were marked in a checkerboard pattern resembling a gridiron.

Gunslinger — Any quarterback known for having a strong throwing arm and leading a prolific passing game. Some examples include Hall of Famers Brett Favre, Dan Marino and "Slingin'" Sammy Baugh.

Hail Mary — Credit Hall of Famer Roger Staubach with this. After the Dallas Cowboys quarterback completed a late 50-yard pass to Drew Pearson to win a playoff game at Minnesota, Staubach said: "I guess you could call it a Hail Mary. You throw it up and pray."

Hard count — One talent every successful quarterback must own is an ability to call out signals in a way that makes defensive players think the snap is coming before it does. That hard count causes them to jump offside. Drew Brees is a master of this technique.

Icing the kicker — No, opponents aren't throwing snowballs in winter or Slushies in warmer weather. This is the "art" of making a kicker wait before he attempts a field goal by calling a timeout, usually late in games. Thankfully, the NFL has limited this practice to one timeout; college coaches can use all three TOs if they have them remaining.

Instant replay — Yes, it's a staple in every sport, sometimes to the point of being a distracting intrusion. And it first was used by CBS in an Army-Navy game. Still, instant replay has become synonymous with pro football, whether for watching a great play all over again or in officiating.

Juke — When any player makes a deceptive move to fake out an opponent on the field. Often, but not always, applies to running backs and wide receivers. Hall of Fame running back Barry Sanders was one of the best at it.

Pay dirt — The 49ers should have invented this one, or at least pirated it. Hitting pay dirt means striking it rich and comes from the California Gold Rush in the 19th century. Too bad the Niners didn't hit pay dirt very often last season: San Francisco was 4-12 in 2018.

Pick-6 — One of many phrases whose origin is uncertain, but it's definition is not. When a defensive player intercepts a pass and returns it for a touchdown, what else would you want to call it?

Pigskin — No, the football isn't made from pig skins. However, when it originally was created, the bladder of a pig often was used inside to help inflate the ball. We would not suggest trying it on the barbecue, though.

Play action — Sounds like what goes on in a casino. It's actually the act of a quarterback faking a handoff or pitchout as he drops back to pass, then throws the ball. It's designed to slow the rush of defenders who have to protect against the run. Philip Rivers has fooled defenses for years with play-action passes.

Point spread — For decades, the NFL tried to ignore its existence, even as it served as a catalyst for some of the sport's skyrocketing popularity. Bettors need not pick a winner but are either given points if they choose an underdog or "lay" points if they pick the favorite. There are other options for bettors — coincidentally, sometimes are called "punters" even though they never kick a ball — such as whether both teams will combine to score above or below a certain number of points.

Red zone — The area of the field inside the opponent's 20-yard line when the offense is expected to come away with points, though it often depends on the quality of a team's kicker. There's also less room to operate, particularly in the passing game. Some teams call it the green zone. Others should call it the dead zone because they can't score down there.

RPO (run-pass option) — A more recent development and another tactic borrowed from the college game. A run play often is the first choice, but when the quarterback sees the defensive line or linebackers in position to thwart it, he has the option to fake the handoff and then throw. Receivers are taught to never assume the running play will be, well, run.

Shotgun — An offensive formation when the quarterback stands roughly six to seven yards behind the center to receive the snap. Popular in this era of a pass-centric NFL, the goal is to give the quarterback more time to look at the defense, to throw, and provide better protection from an aggressive defense. John Brodie of the 49ers is believed to be the first one to use it in 1960. Now, everyone does it.

Scoop and score — When a ball carrier loses the football, most sane people would simply dive on it to get or keep possession. But the show-offs want to scoop it up and run the fumble into the end zone. That would give them a scoop and score.

Screen pass — Watch out, defensive linemen are storming the quarterback! No worries, it's planned on the screen pass, when offensive linemen barely make contact with defenders, then pull outside as the quarterback tosses the ball to a running back or tight end or even a wideout, who then has a caravan of blockers ahead of him. Brett Favre was the master of pulling off screen passes.

Spike — Most fake spikes, such as the one Hall of Famer Dan Marino pulled on the Jets in 1994, are far more impactful. But the spike came into vogue because the NFL no longer wanted quarterbacks chucking the ball far out of bounds to stop the clock. It has been a safety measure that has worked well. It is not grounding because it is designed to do nothing more than stop the clock.

There also is the celebratory spike in the end zone, something perfected by the recently retired Rob Gronkowski.

Sweep — Vince Lombardi didn't invent this run to the outside, but his Green Bay Packers made an art out of it. QB Bart Starr would hand off or pitch to a running back, often Paul Hornung, whose blockers already had pulled in that direction, providing a convoy. All of them are in the Hall of Fame.

A current version is the jet sweep, which usually involves a wide receiver coming in motion toward the quarterback and taking a forward handoff or pitch, using his speed to outpace defenders to the outside.

Tampa-2 — For a tutorial on this defense, try Hall of Famer Tony Dungy and Monte Kiffin. We can tell you that it was developed in response to the West Coast offense and required strong man coverage by cornerbacks, a fast middle linebacker (or versatile safety) and a reliable pass rush. It basically is a seven-man coverage scheme in which cornerbacks try to force receivers to the inside, and safeties protect vertical throws while trying to keep the ball in front of them.

West Coast offense — One of coach Bill Walsh's main contributions to the game, the West Coast was mastered first by Joe Montana and remains the foundation for many offenses today. It featured the quarterback behind center using his running backs and tight ends as something of a substitute for the running game. Vertical routes were limited — in part because Jerry Rice could break anything into a touchdown — and there was lots of motion before the snap. Lots of success, too, as Walsh, Montana and Rice all rode it to Canton.

Wildcat — This formation and play was borrowed from the colleges, or maybe even from high schools. But it became something of a fad in the last decade, then faded, but still is in use for teams with a good runner at quarterback or a halfback with excellent hands and possibly an accurate arm. The QB either leaves the field or splits out wide, while the halfback takes the snap in a shotgun formation and usually runs. But the threat of him passing makes the wildcat somewhat challenging.

YAC — Yards after contact/catch. Yards gained by either a receiver or running back after an initial attempt to stop them by the defense, as opposed to receivers or running backs who are stopped immediately after contact. Some of the best current players in earning YAC include Panthers running back Christian McCaffrey, Giants running back Saquon Barkley, and 49ers tight end George Kittle.