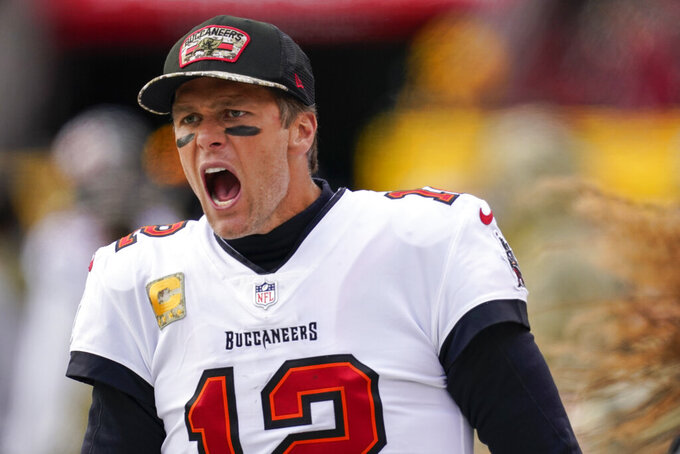 Tampa Bay Buccaneers quarterback Tom Brady yells at his team during the second half of an NFL football game against the Washington Football Team, Sunday, Nov. 14, 2021, in Landover, Md. (AP Photo/Patrick Semansky) 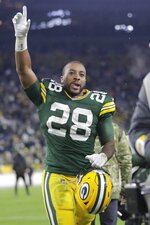 The 36-year-old veteran quarterback will make his first start this season when the Jets host the Miami Dolphins on Sunday. Flacco is taking over for Mike White, who started the last three games in place of the injured Zach Wilson.

Both coach Robert Saleh and offensive coordinator Mike LaFleur talked during the week about Flacco's experience and how that will help the 2-7 Jets against the Dolphins' aggressive defense. And his level-headed, easygoing approach has his teammates feeling pretty confident in the huddle.

“He’s just laid back,” rookie running back Michael Carter said. “Cool. Just calls the play. Hands are in his pocket. Cool guy. Just cool — like the other side of the pillow. RIP Stuart Scott.”

Flacco, the Super Bowl MVP with Baltimore during the 2012 season, was acquired by the Jets from Philadelphia on Oct. 25. With Wilson still recovering from a sprained knee ligament, Flacco has been getting up to speed on New York's offense, which has lots of similarities to systems he ran in Baltimore and Denver.

“He has played so much ball that the cool part about him is when he steps out on the field, he’s seen it all,” LaFleur said. “Just little tweaks and stuff to the offense with cadences and all that kind of stuff is what he’s getting used to.

"But it’s Cool Joe. He’s been there before, so we expect some good stuff from him.”

Just don't expect too much emotion from Flacco on the field. He's all business.

“You want him to speak in confidence that, ‘Hey, this is the play we’re running and we're going to execute it.' And step one, he's done that. And obviously his pedigree throughout the league speaks for itself.”

The NFL is offering complimentary virtual commemorative tickets in the form of non-fungible tokens (NFTs) for select games from Thanksgiving through the end of the season.

Fans must purchase tickets for the specific games through the NFL Ticketing Network (Ticketmaster, StubHub, or SeatGeek), and attend. They will access the virtual commemorative ticket through an email they receive following the game, and then can manage the NFT in a dedicated NFL/NFT marketplace.

One game, Arizona at San Francisco, already has had the commemoratives distributed.

“Creating more one-to-one experiences through innovation and technology is a high priority across the league and clubs,” says Bobby Gallo, NFL senior vice president of club business development. “Leveraging the emerging world of NFTs is a new and exciting way for us to create additional value and to further engage with fans who attend select games by providing a virtual commemorative ticket.”

Also being offered: a limited number of digital collectible NFTs across for all 32 teams for fans to purchase.

Cincinnati quarterback Joe Burrow brought attention to the poverty in his southeastern Ohio hometown — and subsequently inspired more than $600,000 in donations to the local food bank — by talking about conditions there during his Heisman Trophy acceptance speech in 2019.

Burrow is now lending his name to a non-profit program that connects workers with growth industries in that region and provides training and other employment resources.

He filmed a series of videos promoting the program, called LevelUp GRIT Ohio.

Burrow grew up in Athens, Ohio, while his father Jimmy was defensive coordinator under coach Frank Solich at Ohio University.

“The people in my hometown are really second to none,” Burrow said. “There’s the hardest working people in the country there. I’ve been a lot of places now, I’ve seen a lot of people, and I know the people there have what it takes to take the next level in all their lives.”

When Tom Brady stepped on the field for the first time with the New England Patriots in 2000, current Giants offensive coordinator Jason Garrett was a backup quarterback for New York team headed to the Super Bowl.

Garrett’s career has long since ended and he went on to become an NFL assistant who would coach the Dallas Cowboys for 10 seasons before coming to New York again last season to join Joe Judge’s staff.

That Brady kid is in now in his 22nd season. He has won a record seven Super Bowls, including his first with the Tampa Bay Buccaneers last season.

“They’re going to make a Mount Rushmore of football players at some point,” Garrett said. “The first face they chisel will be that guy’s face. He’s the best player who ever walked. He is a hell of a football player. What he has done over the last 20 years have been remarkable. And I think he’s 44 years old and probably playing the best ball of his career.

“It’s really amazing, an inspiration to everybody in and out of sports.”

That list of individuals included a few Packers players.

“Honestly and truly, who else, I mean outside the Green Bay Packers, like how many other people can say they’re an owner, regardless of how significant it is?” Dillon said. “It’s so cool to have your name in whatever way be attached to this franchise. It’s so historical, so many traditions and things like that. I think for me, it was really cool to think, ‘Yeah, I’m a player.’ And one day I’m going to tell my kids, my grandkids, ‘Yeah, I played here but I’m also an owner.’ It’s fun stuff like that. It’s awesome.”

Each share costs $300 and will help fund construction projects at Lambeau Field including new video boards and concourse upgrades.

Packers officials reminded fans interested in buying $300 for a share that owning stock in the Packers doesn’t constitute an investment in the common usage of the term.

The team has no obligation to repay the amount a buyer pays to purchase Packers stock. The Packers say anyone considering whether to buy stock in the team shouldn’t make the purchase in the interest of making a profit or receiving a dividend or tax deduction.

Before facing Cam Newton on Sunday at Carolina, Washington coach Ron Rivera revealed he got a call from Archie Manning after the Panthers lost the Super Bowl at the end of the 2015 season.

Newton was being criticized as a sore loser, and Manning wanted Rivera to know his son Peyton acted the same way after his Super Bowl defeat.

“(He) said, ‘Hey, your guy’s no different than my guy,’” Rivera recalled. “That was really cool that Archie did that, and it really kind of reiterated that the really good ones, they all hate to lose.”

Rivera is coaching against Newton for the first time in a regular-season NFL game and praised the 2011 No. 1 pick this week for his competitiveness and.

“The thing I’ll always remember, too," Rivera said, "is he hated to lose more than anybody I’ve ever been around.”

For the first time in his 44-year career as a coach, Burton Burns missed a game.

The Giants running backs coach tested positive for COVID-19 heading into their game against the Las Vegas Raiders on Nov. 7 and had to stay at his condo with his wife for more than a week. Burns, who recently turned 69, attended team meetings and worked with his players virtually leading to game, which New York won 23-16.

Burns returned to the team Monday, following a bye week for the Giants. Other than some congestion, he said his most noticeable symptom was being tired a lot. It wasn’t as bad not being around the team.

“I didn’t like that at all,” Burns said Thursday as the Giants (3-6) prepared for Monday night’s game against Tampa Bay (6-3). “It was even tougher watching the game on TV. I just wanted to jump through the TV and say something. It’s difficult, and it never happened to me in my career, a long career.”

Burns, who has coached at Southern, Tulane, Clemson and Alabama before moving to the NFL last season, had no idea how he contracted the virus.