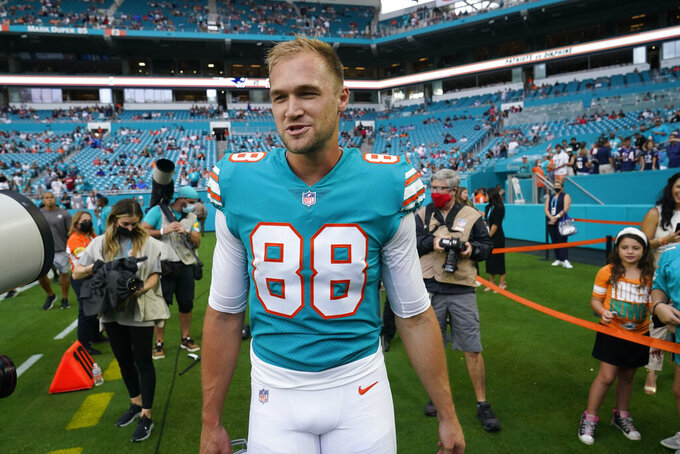 The NFL's salary cap for 2022 will be $208.2 million, a healthy increase from the previous, pandemic-impacted years.

Adding in benefits attached to the cap, teams will be allowed to have a total player cost of $284.367 million.

Quarterbacks, of course, will have the highest franchise tag hit at $29.7 million. The 32 teams had until 4 p.m. Tuesday to apply franchise tags, and two star receivers, Green Bay All-Pro Davante Adams and Tampa Bay's Chris Godwin, got them. The deadline for franchise-tagged players to reach a long-term contract is July 15.

Free agency officially begins Wednesday, March 16, though teams can negotiate with player representatives beginning Monday. Most big deals get done in the two days before the league year officially starts.

Other players who were given franchise tags were tackles Orlando Brown Jr. of Kansas City and Cam Robinson of Jacksonville; Cincinnati safety Jessie Bates III; and tight ends Mike Gesicki of Miami, Dalton Schultz of Dallas, and David Njoku of Cleveland.

None of those tagged was given the exclusive category, meaning any of them could sign elsewhere, but the club losing the player would receive two first-round draft selections as compensation.

—The Chargers and Mike Williams worked out a three-year, $60 million extension that has $40 million guaranteed. Williams was the seventh overall draft pick by the Chargers in 2017 and is coming off a career season when he set personal highs in catches (76) and yards (1,146). He also had nine touchdowns and averaged 15.1 yards per catch.

—The Bills freed up about $5 million in cap space by cutting linebacker A.J. Klein, who was entering the final year of a three-year contract. In completing his ninth NFL season, Klein had four starts in 15 games, and was the primary backup to Matt Milano and Tremaine Edmunds. Buffalo is still projected to be close to $10 million over the cap.