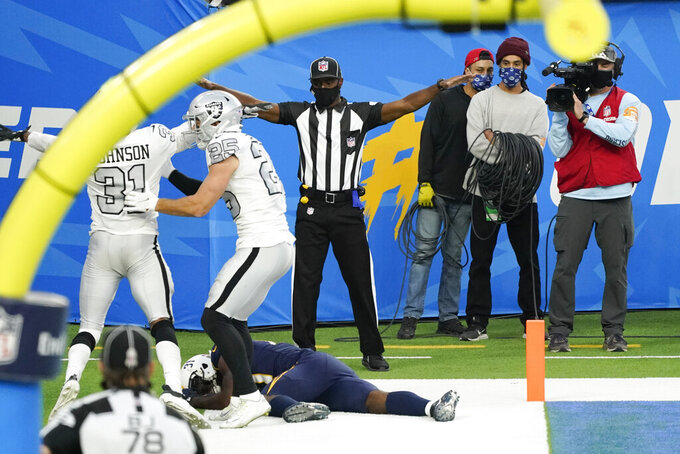 Los Angeles Chargers wide receiver Mike Williams, below, stays down on the field after an injury and an incomplete pass in the end zone during the second half of an NFL football game against the Las Vegas Raiders, Sunday, Nov. 8, 2020, in Inglewood, Calif. (AP Photo/Ashley Landis)

INGLEWOOD, Calif. (AP) — The Las Vegas Raiders were the beneficiaries of another heartbreaking finish for the Los Angeles Chargers.

Justin Herbert's pass to Donald Parham Jr. for a 4-yard touchdown on the final play was overturned after a replay review, and Las Vegas held on to beat LA 31-26 on Sunday.

“They run on the field, rightfully so. They think the game’s over on the last play. Then they go review it and all of our guys rush the field and go nuts. It’s an emotional rollercoaster,” said Derek Carr, who threw two touchdown passes for Las Vegas (5-3), which won for the fourth time in five road games.

Herbert was 26 of 42 for 326 yards and two touchdowns for the Chargers (2-6), who had a game come down to the final play for the second straight week only to come up short.

Los Angeles’ six defeats have been by a combined 24 points and all have been decided by seven points or fewer. The Chargers have dropped nine straight AFC West games.

“Right now we’ve been kicked in the gut six times, and that’s six times too many for me,” Chargers coach Anthony Lynn said.

After Daniel Carlson's 31-yard field goal put Las Vegas up by five, Los Angeles got the ball on its 25 with 4:37 remaining and drove to the Las Vegas 4. They had two shots to win with 6 seconds left. Herbert threw a fade to Mike Williams in the back of the end zone, but Isaiah Johnson knocked it loose.

On the final play, Herbert found Parham in the right corner of the end zone, but it was determined the tight end did not maintain possession throughout the catch.

“It’s always tough thinking you’ve won the game,” Herbert said. “We have to keep putting up points and do our job to keep moving the ball. We didn’t put up enough points today.”

The Raiders trailed 17-14 at halftime but scored on their first two drives of the second half. Carr hit Nelson Agholor for a 45-yard TD and then Darren Waller had a 3-yard score to give Las Vegas a 28-17 advantage with 7:49 remaining in the third quarter.

“I thought Derek showed great command. It’s not easy to go out there in this league with the amount of revolving doors we have up front,” Raiders coach Jon Gruden said.

Michael Badgley’s second field goal brought the Chargers within 28-20. On their next possession, Herbert threw a screen pass to Gabe Nabers for a 4-yard touchdown, but the 2-point conversion attempt failed with 9:12 remaining.

Las Vegas' rushing attack was strong for the second straight game, gaining 160 yards and averaging 6.2 yards per carry. Devonte Booker led the way with 68 yards on eight carries and Josh Jacobs had 14 carries for 65 yards.

Booker opened the scoring, going 23 yards around right end for his first touchdown in two years. After Los Angeles tied it, Jacobs put the Raiders back on top with a 14-yard run in the second quarter.

“Every week coming in I think we are going to run the ball good,” Jacobs said. “I don’t think we’re close to our peak. There are a lot of things where we have to eliminate the mental errors.”

Kalen Ballage had 15 carries for 69 yards and his first career touchdown. He was signed to the Chargers' practice squad earlier in the season and was called up for the game due to injuries.

“Kalen, he stepped up and I thought he did a good job,” Lynn said. “In the second half I thought he started looking too much downfield instead of taking what was in front of him.”

The Chargers became the first team in nearly 11 years to score 10 or more points in the final 20 seconds of the first half as they rallied to take a 17-14 lead.

Herbert connected with Keenan Allen for a 27-yard touchdown to tie it at 14 with 19 seconds remaining. Las Vegas had two timeouts and decided not to run out the clock. The move backfired when Jerry Tillery sacked Carr, forced a fumble and recovered the ball at the Raiders 27 with 8 seconds left, and Badgley made a 45-yard field goal.

“I don’t regret calling it. I do regret the results, that’s for sure,” Gruden said. “But we had a great look for Waller. It’s too bad the ball got knocked out of there.”

The last team to score 10 points that late in the half was Philadelphia on Dec. 28, 2008, against Dallas.

Allen finished with nine receptions for 103 yards and a touchdown. It was his third 100-yard game of the season and the 26th of his career.

Raiders: CB Trayvon Mullen (hamstring) and FB Alec Ingold (ribs) were injured during the first half. LT Kolton Miller (ankle) was inactive for the first time in his three-year career.

Chargers: At Miami next Sunday.