No easy street: Broncos falter in 30-13 loss to Eagles 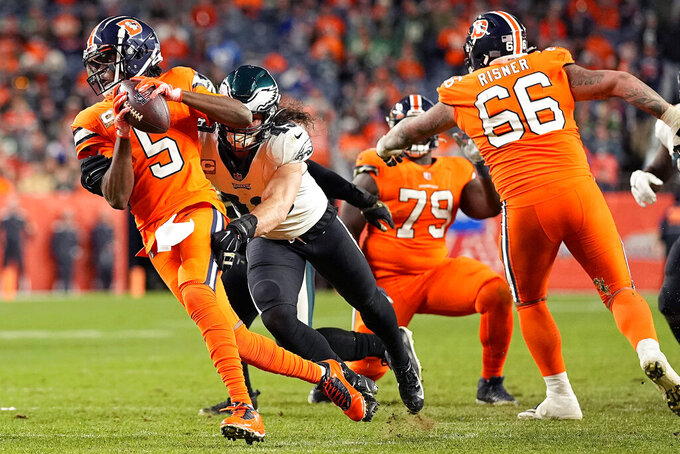 Denver Broncos quarterback Teddy Bridgewater (5) tries to escape the reach of Philadelphia Eagles outside linebacker Alex Singleton during the second half of an NFL football game, Sunday, Nov. 14, 2021, in Denver. (AP Photo/Jack Dempsey)

DENVER (AP) — From a blocked field goal to giving up a momentum-changing fumble return for a score, it all felt so difficult for the Denver Broncos.

To think, it all seemed so easy a week ago.

Teddy Bridgewater and the Broncos fell flat in a 30-13 loss to the Philadelphia Eagles (4-6) on Sunday after a dominating performance at Dallas the week before.

At 5-5, the Broncos head into the bye week with a big question they're trying to resolve: Just what exactly is their identity? Safety Justin Simmons hoped everyone took a long look in the mirror during the break.

“It’s easy to point the finger and say, ‘Well, this guy was wrong. This guy was wrong. I didn’t like this. I didn't like that,'” said Simmons, whose team upset the Cowboys 30-16 a week ago. “I feel like too many people do that nowadays. You've got to point the finger at yourself and say, ‘I could have played one play better. I could have made this play happen. I could have did something earlier that would've helped shape the game.’

“I'm not saying guys are pointing the finger. I’m just kind of venting up here and speaking from my heart.”

The Broncos struggled against an Eagles defense that was ranked 20th against the rush. They were held to 96 yards rushing after gaining 190 last Sunday. Denver had a new coach in charge of sending in the plays with Mike Shula filling in for offensive coordinator Pat Shurmur, who was out due to COVID-19 protocols.

But this really boiled down to the red zone, where the Broncos scored one TD in five trips. They had had a 22-yard field goal attempt from Brandon McManus blocked and a touchdown called back in the third quarter when tight end Eric Saubert was called for holding.

“We had opportunities and we came up short," said Bridgewater, whose team was 2 of 3 in red-zone efficiency against the Cowboys. "We’ve just got to be better.”

The game changer occurred on the last play of the third quarter, when Broncos rolled the dice by going on fourth-and-1 at Philly's 23. The play backfired — big time.

Melvin Gordon III attempted to gain more yardage, only to fumble. Philadelphia defensive back Darius Slay scooped up the ball, danced around looking for some daylight, and took off for an 83-yard score.

On the play, Bridgewater had a shot to slow him down, but couldn't. He refuted the notion he sidestepped a chance to tackle Slay.

Slay's play made it 27-13. The Broncos never recovered.

“It was definitely a momentum shift,” Bridgewater said. "We’re a team that has responded before. We just didn’t respond as well today.”

The Broncos struggled to contain Eagles QB Jalen Hurts, whose read-option decisions were right on and confounded Denver's defense. Hurts finished with 53 yards rushing to go with 178 yard through the air, including two TD passes to DeVonta Smith. Hurts also had a pass picked off by Simmons.

About Denver's run defense, which allowed 214 yards on the ground, defensive end Dre’Mont Jones said there's plenty of blame to go around.

“I would call it a combination of us not executing and probably coaching, pure and simple,” said Jones, whose team held Dallas to 78 yards rushing. “We missed an opportunity completely. We dropped the ball. Straight up.

A bye week may be arriving at an opportune time — to fix some things and soothe some feelings.

“By no means is the season over,” Simmons said. “Got a lot of season left. No excuses. We’ve got to close the season out the right way.”