'No nostalgia': For Flores, Dolphins-Pats is just business 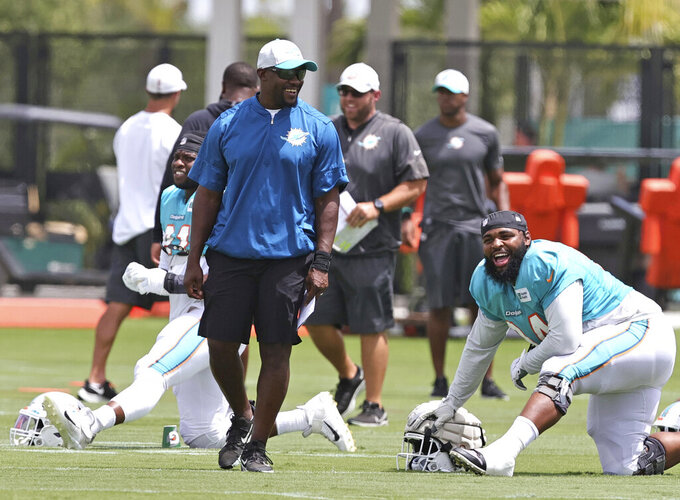 There’s no set pregame routine that he adheres to, no must-have meal before a game and no time wasted reminiscing over the past. As such, when Miami opens the season at New England — his former coaching home — on Sunday, there won’t be any wistful looks around from Flores’ spot on the Dolphins’ sideline.

“This has happened twice and one time there was no fans, so it was a very different atmosphere. The other time was two years ago,” Flores said. “Again, I’m not a guy who thinks about what happened two years ago. Look, I was there for a long time. I learned a lot there.”

It could be said he learned just about everything there.

Most of Flores’ football life has been spent in Massachusetts, first as a player at Boston College and then 15 years with the Patriots under Bill Belichick. He worked his way up the ladder, from scouting assistant to position coach, and picked up three Super Bowl rings along the way before taking over the Dolphins in 2019.

His first trip back to Foxborough was a success, a season-ending win in 2019 that knocked the Patriots into a wild-card spot during what became Tom Brady’s final season there. The Dolphins opened at New England last season as well, losing 21-11 in a game played before no fans.

“I was very fortunate to have been there,” Flores said. “I enjoyed my time there. There are still some people there that I still have relationships with. I have great respect for that coaching staff and that organization, but when we’re going there we’re going there to compete. That’s what it is.”

The approach is a refrain that Flores uses often, and among players it seems to be coming across loud and clear. Dolphins quarterback Tua Tagovailoa said he adheres to a similar set of principles, taking things “one meeting at a time, one practice at a time, maybe one sip of this Pedialyte at a time.”

“I think it keeps everyone even-keeled, keeps everyone level-headed,” Tagovailoa said. “And I think that helps with consistency for all of us in the building. When you try to look too far ahead, you know you’re not focused about the task at hand and what we’ve got to do now.”

For his part, Belichick raves about Flores. Among his many compliments directed toward the Dolphins on Wednesday: “Obviously, well-coached,” Belichick said.

He didn’t stop there, either.

“Disciplined. They don’t make a lot of mistakes. Take advantage of opportunities,” Belichick said. “We’re going to have to do a really good job of playing a good, sound football game.”

The ties that bind go in both directions for this game. The Dolphins have three other coaches who’ve worked in New England on the staff, along with general manager Chris Grier and assistant general manager Marvin Allen, plus a half-dozen former players. Same goes for the Patriots, with six former Dolphins on their roster.

And in some cases, the links are much stronger than others: Patriots DB Devin McCourty is the identical twin brother of former Patriot and current Miami DB Jason McCourty.

“My first year in New England I went back to Nashville to play against the Titans. The second year in New England, I played against Cleveland,” Jason McCourty said. “I’ve gotten a chance to go against former teams and I guess, what I’ve even told guys here, what I’ve learned is it’s another football game.”

Inevitably, there will be familiar faces for Flores to see. Past co-workers, stadium employees, and of course he’ll have a chat with Belichick.

He just doesn’t let sentiment throw him off, saying it’s a disciplined way to live that works best for him.

“Bill, everyone on his staff is there to compete and that’s what I learned there and I’ve taken that with me here and that’s my approach,” Flores said. “So, there’s no nostalgia.”