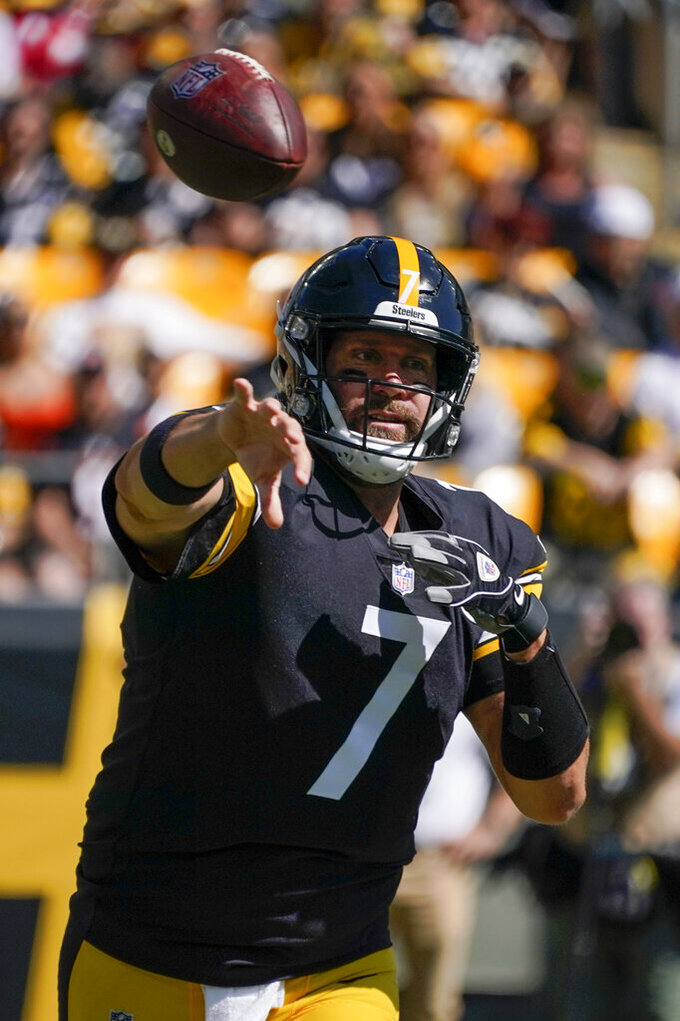 GREEN BAY, Wis. (AP) — Green Bay’s Aaron Rodgers and Pittsburgh’s Ben Roethlisberger haven’t faced off as starting quarterbacks since the Packers defeated the Steelers in the Super Bowl a decade ago.

That finally changes Sunday when the Packers (2-1) host the Steelers (1-2) in just the third overall matchup between the two potential Hall of Famers.

“It’s the old cliché — everyone says it’s the quarterbacks against each other, and then we’ll say, ‘No, we play against the defense,’" the 39-year-old Roethlisberger said. “But it’s still an honor to share a stadium with one of the greatest and a guy that I admire, and a lot of people admire, that has just done it at such a high level for a long time. It’s pretty cool to watch his mastery of the game.”

Although the Steelers have won two regular-season games with the Packers since that Super Bowl, Rodgers didn’t play either time because separate collarbone injuries. Roethlisberger led the Steelers to a 38-31 victory in 2013 and a 31-28 triumph in 2017. Green Bay had Matt Flynn at quarterback for the 2013 game and Brett Hundley for the 2017 matchup.

Rodgers’ lone Super Bowl appearance was a 31-25 win over Roethlisberger’s Steelers on Feb. 6, 2011, in Arlington, Texas. The only regular-season matchup between Rodgers and Roethlisberger came in 2009, when the Steelers edged the Packers 37-36 in Pittsburgh.

The Steelers are the only NFL team Rodgers hasn’t faced at Lambeau Field as a starting quarterback.

“I remember the ’09 game very well,” the 37-year-old Rodgers said. We were pretty explosive on offense, hit Greg (Jennings) down the middle for I think it was an 85-yard touchdown (actually 83), then hit J.J. (James Jones) on a post late in that game to put us ahead, and then Big Ben took them down to beat us there right at the end. That was a good football game.”

The Steelers have won their past five regular-season meetings with the Packers, but enter Sunday’s game in the AFC North cellar after losing at home to Las Vegas and Cincinnati the past two weeks.

“We understand where we are,” Steelers coach Mike Tomlin said. “We don’t want to be here. We don’t like it, but forget about not liking it. What are you going to do about it?”

Packers receiver Davante Adams has caught 20 passes for 253 yards over the past two games. He set up the game-winning field goal in a 30-28 victory at San Francisco by catching passes of 25 and 17 yards in the last 37 seconds.

“The relentless pursuit of perfection has always separated Davante from his peers,” Rodgers said.

Pittsburgh’s issues on offense can be traced back to the middle of last season, when the Steelers began to sputter even while getting off to the best start (11-0) in franchise history.

The Steelers have been outscored 64-6 in the first quarter over their past 11 games. The six points came on Joe Haden's interception return in a win over Baltimore last December.

“As an offense, we need to start faster, but it kind of starts with me,” Roethlisberger said. “I need to get better with that because that’s kind of the key to a successful day: starting fast.”

Crosby has made 22 consecutive field-goal attempts, one off his own franchise record. He made 23 straight from 2010-11. Crosby made a 54-yarder as well as a game-winning 51-yarder as time expired in the 49ers game.

KEEPING A LID ON IT

The Steelers had their NFL-record streak of 75 consecutive games with a sack end last week against Cincinnati, thanks in part to the absence of outside linebackers T.J. Watt and Alex Highsmith.

Watt is hoping to return from a groin injury on Sunday. Pittsburgh’s pass rush needs the All-Pro to help a secondary that has looked ordinary at times.

Green Bay’s Elgton Jenkins missed the 49ers game with an ankle injury, and his status remains uncertain for Sunday. Jenkins, a Pro Bowl left guard last season, has been filling in at left tackle while All-Pro David Bakhtiari recovers from a torn anterior cruciate ligament.

Yosh Nijman played left tackle in the 49ers game and fared well after a tough start.

The Steelers are having trouble protecting Roethlisberger, who has been sacked eight times in 138 drop-backs. He was sacked just 13 times in 614 drop-backs last year.