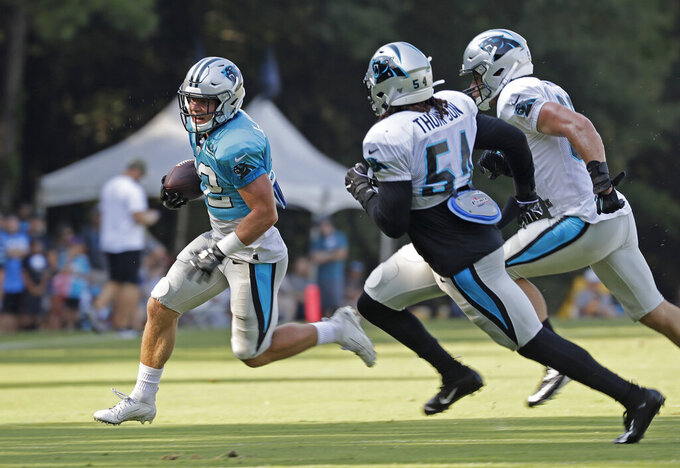 Offensive coordinator Norv Turner wants to increase McCaffrey's touches this season while reducing the number of plays he's on the field after the running back racked up a franchise-record 1,965 yards from scrimmage.

"He told me he was going to give me the ball more and that's music my ears. I got excited," McCaffrey said.

It came during a season where McCaffrey rarely left the field when the Panthers had the ball.

He played a ridiculous 91.3 percent of Carolina's offensive snaps in 2018 despite playing only 10 snaps in a meaningless Week 17 game against the Saints.

That's by far the most of any running back in the league. McCaffrey's 965 offensive snaps outpaced the Cowboys' Ezekiel Elliott (890), the Giants' Saquon Barkley (853) and the Rams' Todd Gurley (825).

All other NFL running backs played fewer than 750 snaps.

But too often the Panthers felt McCaffrey was needlessly used as a decoy when he could have benefited from taking a few plays off and been fresher and even more explosive when he touched the football.

McCaffrey's 326 touches aren't even in the same league as some of the previous running backs Turner has coached.

Emmitt Smith and Ricky Williams each had two seasons where they had more than 400 touches under Turner, while LaDainian Tomlinson had one season with 398 touches and another with 375.

So Turner isn't afraid to lean heavily on his No. 1 back.

McCaffrey has worked hard this offseason on his stamina in anticipation of a greater workload. He's added plenty of muscle in his upper and lower body although he downplayed it by shrugging his shoulders and saying it's "only one or two pounds."

He said he's been more focused on improving his speed.

"I prepare so that I can be in the whole game," McCaffrey said. "I felt great all last year, felt great all offseason, and I feel really good right now. The goal for me is be ready to play, be ready to get the ball as many times as possible."

Rivera has no doubt McCaffrey is ready for what's ahead this season.

"He constantly tells me, 'Coach, if we play 1,000 plays, I want to play 1,000 plays,'" Rivera said. "He does not want to leave the field. But for his own well-being as a football player, we have to be smart and be judicious as to when he's out there."

Turner said that means finding someone else to give McCaffrey a breather, something he hopes to accomplish in the upcoming preseason games.

Cameron Artis-Payne returns for this fifth season with the Panthers and is the odd-on favorite to be McCaffrey's primary backup. Reggie Bonnafon is an intriguing player with a similar skillet to McCaffrey, and the team also drafted Jordan Scarlett and signed undrafted rookie Elijah Holyfield, son of former heavyweight champion Evander Holyfield.

"We have a good mix of guys and we have to find the answers," Rivera said.

NOTES: Panthers linebacker Luke Kuechly has been working with the second team in team drills, a sign that the six-time Pro Bowl selection will skip the team's preseason opener Thursday night at Chicago after getting dinged up last week. Jermaine Carter has been working with the starters. ... Carolina released its first depth charter with Kyle Allen listed as the backup quarterback behind Cam Newton, followed by rookie Will Grier and Taylor Heinicke. ... Rivera said the most intriguing battle this season at training camp has been at nickel back.