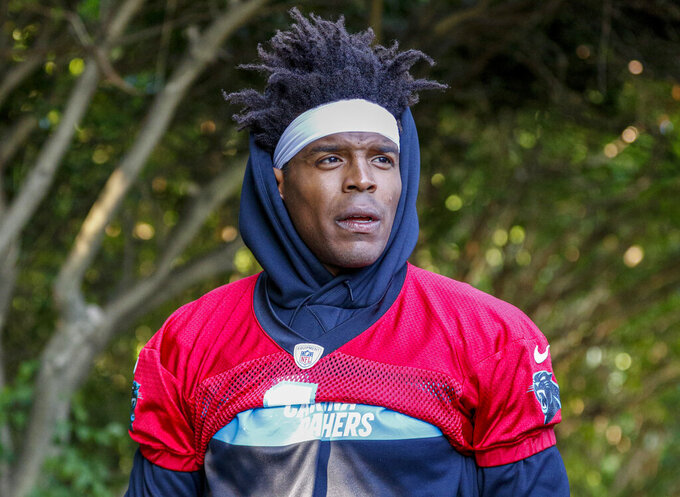 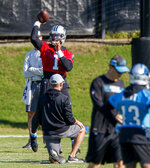 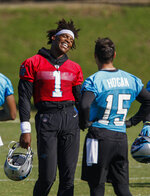 CHARLOTTE, N.C. (AP) — When Cam Newton starts throwing the football again in meaningful games, the Panthers want to make sure he's doing it the right way.

Carolina's coaching staff is placing an added emphasis on improving Newton's throwing mechanics as the 30-year-old quarterback continues his recovery from arthroscopic surgery on his right shoulder.

Newton threw about 20 passes to stationary targets on the first day of mandatory minicamp Tuesday.

Newton has done some light throwing before, but these were his first tosses in front of reporters since undergoing surgery in January.

The team promoted the event on Monday, announcing it would be live-streamed for fans to watch. But there wasn't much to see.

The 2015 league MVP didn't overexert his arm, essentially throwing light warmup passes of less than 15 yards to teammates. He did not participate in team drills.

Panthers coach Ron Rivera said the goal is for Newton to return to using the mechanics he displayed early in the 2018 season before developing shoulder soreness and struggling in the second half of the season.

"If you go back and look at some of the things that happened earlier in the year before the shoulder injury, you can see the improvement, you can see the footwork and the development," Rivera said. "When the shoulder started to go, everything just kind of fell to the wayside. Now he has an opportunity to go back, rework those things and do the things he needs to improve."

Rivera, a former NFL linebacker, said he couldn't describe in detail exactly what tweaks the Panthers are trying to make with Newton's mechanics, joking that he can teach about how to tackle but not how to throw a football.

Newton offered no insight either, running by reporters after practice without stopping for interviews.

Rivera said Newton is going through the steps of his injury rehabilitation and the team is pleased with his progress.

"He did exactly what we had scripted out and made some targeted throws," Rivera said. "We will see how he feels today and (Wednesday), and that will dictate how much more he does" in minicamp.

Rivera's expectation is that Newton will be cleared to practice fully when training camp begins in late July. Rivera said he's eager to see Newton in his second year in coordinator Norv Turner's offense.

"You saw the growth and the progression and he will now be in the second year of the system," Rivera said. "Understanding exactly what he needs to do as a quarterback. The decisions he needs to make, is going dictate a lot about his throwing style as well."